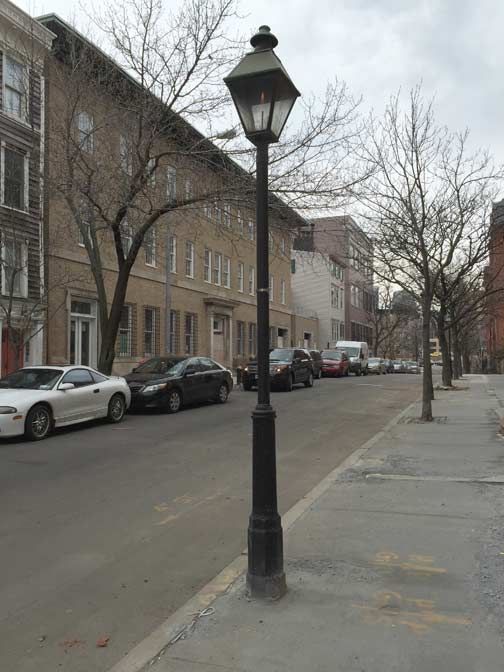 Several years ago, a couple of dozen electrically-powered gaslamps were installed along the block bounded by Poplar, Henry, Hicks and Old Fulton Streets in Brooklyn Heights. A few have been removed, but most of them still burn brightly. This batch of gaslamps is largely a mystery– if someone knows the secret behind their origin, fill me in.

Of course, gaslamps once lined most of NYC’s existing streets before electric lamps first started to appear in 1892 or so. Some of NYC’s curbside gaslamp posts hung in there well into the 1970s; today, only two remain, at Broadway and West 211th (even that may have been a mere signpost, which employed the same base and shaft as the gaslamps) and in Patchin Place, a Greenwich Village cul-de-sac. That post is now connected to an electric wire.

However, electrically-powered gaslamps can still be glimpsed in front yards and entrances around town. This Poplar Street group, though, are the only curbside set.

There are a number of houses along State Street which have operational gaslights inside their front fences.

Is your comment that the gas post on W. 211 St. might have been just a signpost merely speculation, or is there some evidence to support this?

I found an old photo in which the post appears off to the side with 2 street signs attached at the apex. Now, it may indeed have been a repurposed gaslamp, but the flicker of doubt is in my mind now.

The photo cuts off the buildings to the right along Poplar Street, which, when renovated in the 1970s, included these gaslights in the redevelopment. The entire block from Poplar to Hicks to Old Fulton Street to Henry Street was vacant when I moved to Brooklyn Heights in 1968. The renovation included the Orphan’s Housing at 55 Poplar and the numerous other buildings on the block.

It looks like they may have been installed as part of local beautification project. On a related note, I read somewhere that the old Brooklyn Union Gas Co.used to provide working font-yard gas lamps to homeowners that were fixing up brownstones in Park Slope and Bklyn Hts during the early gentrification waves back in the ’70s.

The two gas lights remaining at west 211 st and. Bway in the Inwood section of Manhattan, I think I know their location the one that comes to mind is diagonally across from The Good Shepherd Church, one of them is right on the corner of 211st and Bway in the vincinity of Isham st…I will be in NYC in June I’ll will give them a closer look
Martin Powers