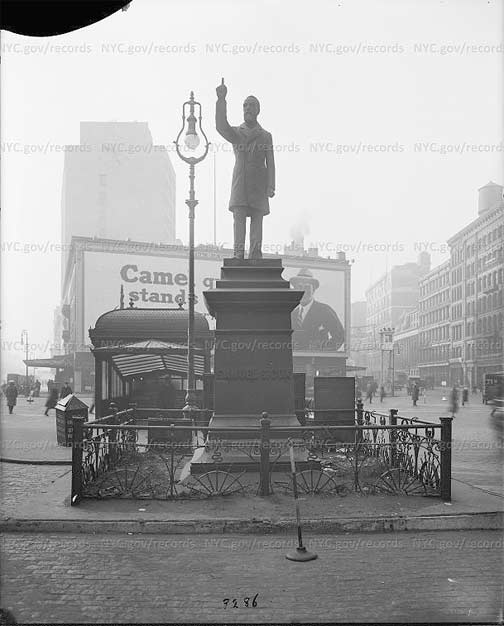 Samuel Sullivan Cox appears as if he’s hailing a cab here at Cooper Square and Astor Place in 1924.

Though Louise Lawson’s sculpture of Ohio Congressman Samuel Sullivan Cox has stood at Tompkins Square’s southwest corner at Avenue A and East 7th Street since 1924, it was initially placed the triangle formed by Lafayette Street, 4th Avenue and Astor Place in 1881, in the spot where Tony Rosenthal’s “Alamo,” the revolving cube, stands today. It was apparently moved shortly after the photo was snapped.

S.S. Cox (1824-1889) was a Democratic Party member of the House of Representatives from Ohio from 1857-1865, and from New York from 1869-1889, when he retired. He championed the Life Saving Service, which patrolled the coast looking for shipwreck survivors; the Service became part of the US Coast Guard in 1915.

He is remembered with the statue, placed while he was still in Congress, for his involvement with the US Post Office. He introduced legislation that assured paid benefits, 2 weeks’ vacation, and a 40-hour work week — innovative in that era — for postal workers. Letter carriers from 188 cities inscribed on the monument, raised $10,000 for its creation.

ANOTHER IND CLASSIC, Upper West Side

Never knew that statue was ever there, being used to seeing him in the park.
By the way, the triangle has been torn up again and “Alamo” is missing.

It wasn’t placed where the Alamo stands today. According to the photo, it was placed just north of it. Just north of the Astor Place IRT station.

Where was this statue moved to since it got replaced by the cube?

I was never replaced by The Alamo.

It was never replaced by the Alamo aka the cube.

On the topic of gesturing statues. Not sure if it’s a gesture, really, but whenever there’s a decent snowfall in Madison Square Park, Chester A. Arthur’s statue collects a good amount of snow on one of his hands. It looks like he just made a snowball and is waiting to peg a Madison Ave express bus.