INTO THE LIGHT in Inwood 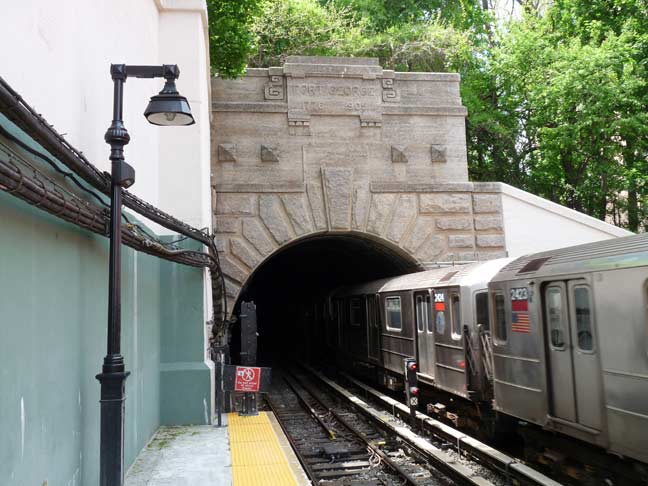 At Dyckman Street The IRT emerges from, and enters, a tunnel under High Bridge Park inscribed with the title “Fort George” and the dates 1776 and 1905. Fort George, originally Fort Clinton, was built by US patriots at about where George Washington High School stands at Audubon Avenue and West 192nd Street. Though the British eventually captured the fort, Colonel William Baxter and his Bucks County Pennsylvania militia were able to hold off British general William Howe’s troops long enough for Washington’s troops to escape to New Jersey (much of the Revolutionary War in 1776 in the NYC area consisted of Washington escaping to fight again).

In 1895, entrepreneur Joseph Schenck and his partner, Marcus Loew (later founder of a movie theater chain) opened the Fort George Amusement Park at the end of the old 3rd Avenue trolley line on the old fort site:

During its heyday this Gotham wonderland would boast two Ferris wheels, three roller coasters, nine saloons, a pony track, several hotels, a casino, five shooting galleries, a tunnel boat ride, two music halls called the Star and the Trocadero, fortune tellers and more frankfurters, peanuts and pretzels than you can imagine. My Inwood, which features plenty of photos and postcards of the park

However, as “civilization” crept north to Inwood, the park’s noise became increasingly distasteful and the park came under attack from arsonists, who unsuccessfully tried to burn down the park in 1911, but succeeded two years later. By then Schenck and Loew had sold their interests and went on to the motion picture industry. The site then became part of High Bridge Park. 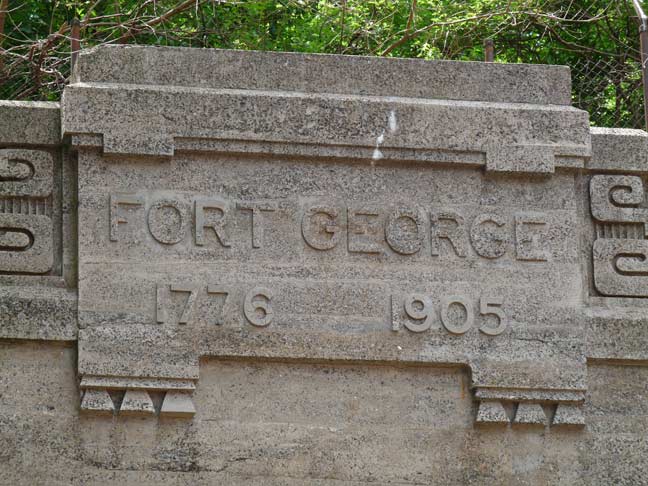 The “1905″ date on the tunnel wall simply refers to the date of construction: the NYC subway, that had begun construction in 1900, arrived in Inwood that year. (Compare the extended length of time it’s taking to extend the #7 Flushing Line one stop and the BMT 3 stops on 2nd Avenue.) The Dyckman Street station opened March 16, 1906.

Much more in Inwood on this FNY page.

You’re comment on subway construction is spot on. They built the original IRT Contracts I & II in 8 years – using hand powered shovels, mule and horsepower transportation and slide-rules to design and construct. You would think that with modern construction equipment, modern tools, lasers, computers and all the technological advantages of the 21st Century that it would take a fraction of those eight years to build today (purely based on technology, not population). Building the original IRT today would probably take 30 years. Look how far we’ve come.

Environmental, labor, and construction safety laws are far stricter today than a century ago. No one worked a forty hour week a century ago. Streets were simply dug up for the subway without regard to motor traffic, because most street vehicles then were horse drawn; the only exceptions were electric streetcars (the excavations were decked over during construction but that was about it). Stations did not need to have elevators for handicapped access. Stations and tunnels require far more sophisticated ventilation and emergency exit systems than years ago. The subway communications systems are far more complicated (Metrocard is part of today’s communications).

The reason that opening a new subway station takes so long is because today’s station isn’t just a pair of platforms and a staircase, it’s an actual machine that has countless wires, sensors, monitors, signals, escalators, elevators and other technology.

The funicular elevator alone at the new Hudson Yard station makes it a time-consuming project.