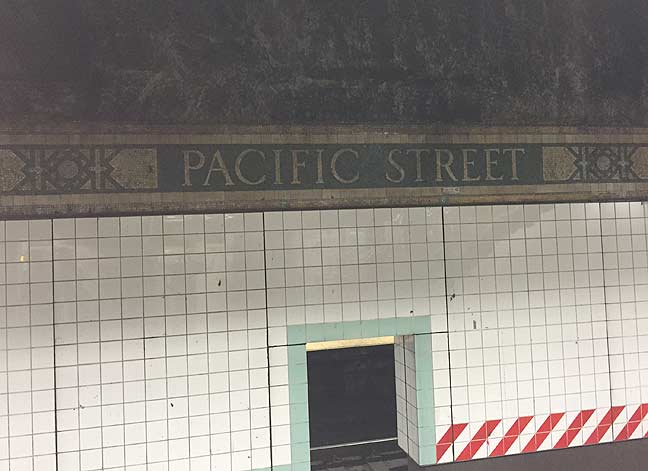 It occurs to me that the Pacific Street station on the BMT has joined the likes of 33rd/Rawson, or Woodhaven Boulevard/Slattery Plaza, or 39th Avenue/Beebe Avenue in sporting outmoded signs or tilework.

When the Rust Moderne sports arena, Barclays Center, opened in 2012, all three stations were rebranded Atlantic-Barclays Center, and so the station tilework here, dating to 1915, was rendered obsolete.

And here it’ll remain until Brooklyn is underwater late in the millennium!

I remember running across the platform at Pacific Street from the RR local to catch either the N Sea Beach or B West End train (when they ran express) to 36th Street, standing in the front window, flying by Union Street, 9th Street, Prospect Avenue and 25th Street in an amazing time of about 5 minutes. Wow! The support posts flying by looked liked a picket fence.
One of the only, if not, the only place you can cover that much ground in such a .short time in NYC.

Yes, I recall as a kid, the best way to go south from Union St
was to go north one stop to Pacific St. Then I’d switch directions and get on a West End or Sea Beach Express and it would sèem like we were doing 60 MPH on the way to Coney, and especially if you were looking out the 1st car window. For 15 cents, it was absolutely the fastest mode of traveling to 36th and 59th St. except it may have been faster the other way around.

I have always called it Pacific Street… And I always will!

Not having been there in a while, hadn’t known it was changed. I was looking for it!