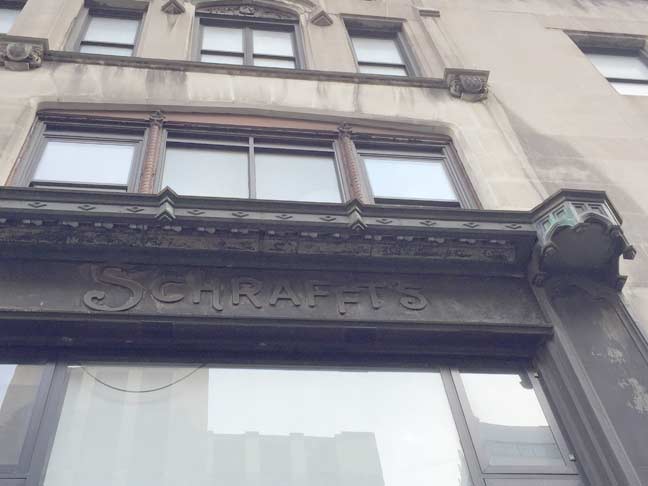 Everybody went to Schrafft’s. Kirk Douglas as a young struggling actor worked as a waiter in a Schrafft’s. Movie stars, politicians, even Presidents (Truman) stopped into Schrafft’s. Truman Capote got thrown out of Schrafft’s (more than once) for being a nuisance to the clientele (joking around irreverently and laughing too loudly). James Beard admired “the precisely trimmed egg salad sandwiches. Mary McCarthy ate them. E.L. Doctorow’s character “Billy Bathgate” ordered the crustless chicken sandwiches at a Schrafft’s where he and his mother joined “all the fine people in the Bronx.” Authors often placed their characters in Schrafft’s, and often noting the specific choices on the menu because those were famously delectable to millions of New Yorkers and out-of-town visitors. David Columbia, New York Social Diary

This is the only tangible remnant of the myriad Schrafft’s lunch counters that once dotted the NYC landscape, and it’s only there because it’s part of the metalwork at at Gothic-style building at #1 Smith Street, just off Fulton.

From my Smith Street page:

The restaurant chain was founded by Frank G. Shattuck, who expanded William Schrafft’s candy business founded in Charlestown, Massachusetts in 1861 into chain restaurant empire beginning in 1898.

Schrafft’s was known for wholesome, all-American fare, served by fresh-faced Irish waitresses. Mothers and children ate there; so did movie stars. Schrafft’s restaurants were located in high-end shopping districts, like Fulton Street in Downtown Brooklyn.

But times changed, Fulton Street changed, and Schrafft’s did, too. By 1968 they seemed quaint, almost dowdy. They hired Andy Warhol, of all people, to give them a snazzy new with-it image, and remodeled to emphasize their bars to snag the younger clientele. McBrooklyn

Schrafft’s was purchased by the Riese Organization in 1978, the company that brings you T.G.I. Friday’s (which until 2007 occupied the old Gage and Tollner landmarked space on Fulton Street in Brooklyn) and soon after their many locations closed. “Schrafft’s” has since been reactivated as an ice cream brand. NYCNosh: In Search of Schrafft’s

You missed a major purchase. In 1967 PET Milk bought the company and split it into separate companies which is how the ice cream business was able to survive on.

They will forever live on even more in their iconic Boston candy factory which has been renovated and now features multiple businesses, schools, communications studios and more importantly still carries the company’s signage.

The Schrafft’s at 13th Street and 5th Avenue in Manhattan became a country-western club with a gigantic enormous iguana on the roof. We would sing:

“Away above my head
“I see the strangest sight..
“Iguana on the roof…
“He’s up there day and night.”

The country-and-western bar went out of business, the building became a fresh foods market, and was later torn down, along with the iguana.

We had a Schrafft’s on Flatbush Ave across from Erasmus Hall HS and all the teachers used to eat there…They charged more for a cup of coffee in the old days and said the reason was that they served pure cream on the side.The Company also ran our cafeteria facility in my office bldg in Manhattan….and yes, their Ice Cream was delicious…

My Grandmother thought Schrafft’s was sufficiently respectable for her. Very few places were, back in the Depression.

My granfdfather Robert G. Stehlin used to go to Schraffts in the 1930’s. How do I know? His diaries. I never heard of the place until recently going through his journals.An entry for June 9,1937 says “Tilson gave me a loaf of orange bread from Schraffts.”

I worked at the schraffts on Fulton st..near A&S….worked in the men’s grill..1960 or so…pretty fancy place had to wear black uniforms with I think a white apron.

Our hostess was miss devereax….

Hi Mary, you don’t happen to remember a waitress called Angela from County Fermanagh? She would have been around 40 in 1960.

Hi,
Has anyone heard of Michael Scully and Beatrice Costello who worked there around 1949 to 1955? I believe Michael Played piano there in Manhattan on 5th avenue. Bernice was from Ballaghadereen Ireland and Michael was from Dublin.