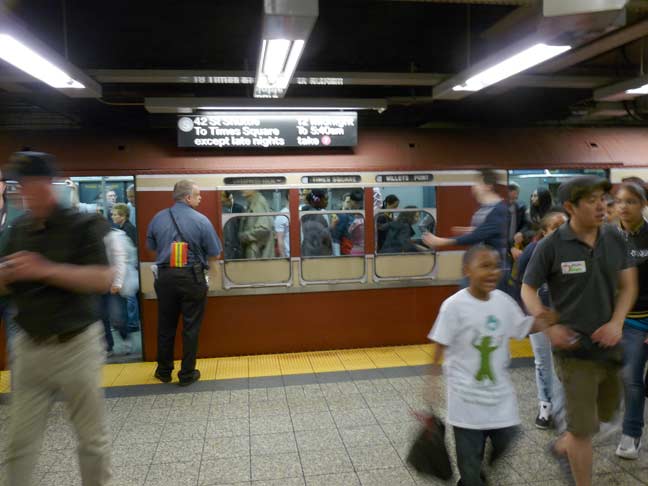 This is the sole remaining R-15 car unit, #6239, remaining in the NYC Metropolitan Transit Authority collection. It was built in 1950 by American Car and Foundry, and primarily served the IRT Flushing Line until the R33/36 “World’s Fair” cars, later painted maroon and dubbed “Redbirds” were purchased. It remained in occasional service until 1984 until it was retired and then used to test air conditioning units.

The car usually serves in the “Train of Many Colors” trainset the MTA trots out for special occasions, such as the second weekend in May 2013 when Grand Central Terminal was celebrating its centennial.

There were 100 cars built under the R15 contract. These cars were the first IRT models with a turtle-back roof and ventilating fans placed inside the ceiling. Today’s cars still use the same basic roof profile. Ceiling fans, of course, have given way to air conditioning (which does of course require fans to diffuse the cooled air). A unique feature of the R15 were the porthole doors, not replicated in later car models. All models since the R15 went back to the larger rectangular door windows originally seen on the R10 and R12 models in 1948.

I remember riding these cars when I was a little kid, and the porthole windows in the doors…like all kids, I made faces out of them.

As I got older, I was intrigued by the rectangular straps that hung from bars…they were the first straps I could hang from. I thought I was quite grown-up when I could do so. As I got older, the novelty of straphanging was soon lost upon me.