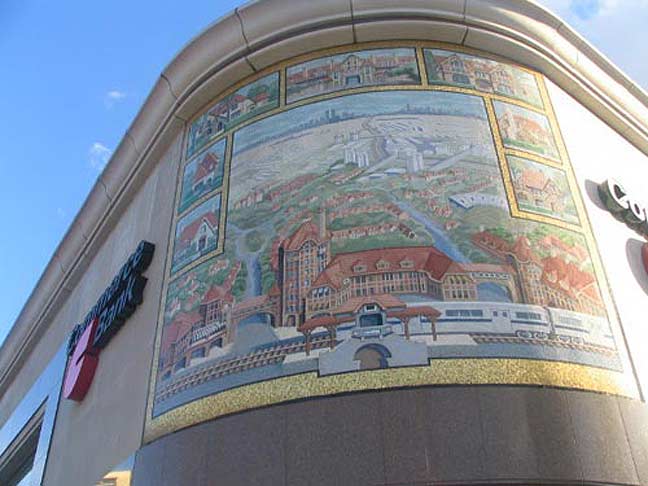 World-renowned muralist Richard Haas‘ work depicting Forest Hills Gardens has appeared on the bank on the southeast corner of Queens Boulevard and 71st Road since 1989. Haas, whose murals can be found at Chase Field in Phoenix, as well as courthouses, government buildings and department stores in Chicago, West Virginia, St. Louis and Munich, Germany, explained that he was attracted to Forest Hills Gardens because of its European garden model.

In 1909 Cord Meyer, the developer of nearby Elmhurst, sold 100 acres south of the Long Island Rail Road to the Russell Sage Foundation, which commenced to piece together a nearly self-contained community, Forest Hills Gardens, from sixteen former truck farms throughout the 1910s and 1920s. Winding streets, Tudor brick buildings, and short, cast-iron streetlamps and street signs make the development completely unique in New York City.

The mural shows the Forest Hills Inn, Station Square and a passing LIRR train in front, depictions of separate FHG buildings in panels on the sides, and Forest Hills Stadium on the right and the Manhattan skyline, including the Twin Towers, in the background.

The bank is located on the site of the Stratton, a once-famed Forest Hills nightspot.