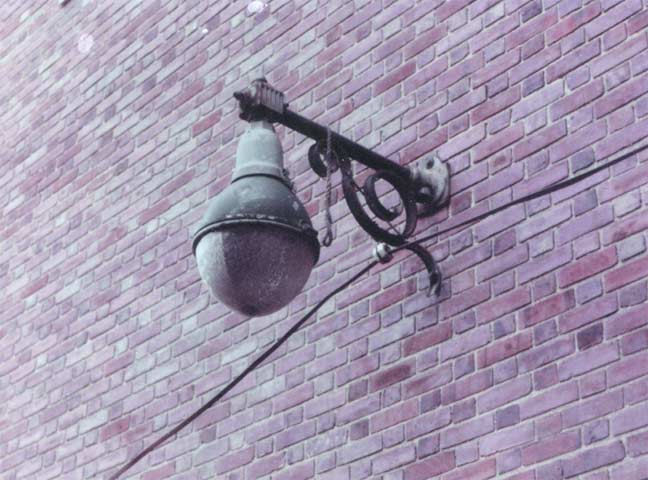 Though the Staten Island ferry terminal main building was completely renovated in 2005 (which removed, among some other things, the ancient track indicators for the Staten Island Railway) there’s this survivor on one of the administrative buildings, a “gumball” luminaire first introduced in the late 1930s on a short version of the scrolled bracket used on telephone poles and walls.

Quite a few of these brackets, in their shorter and longer versions, survive on poles encountered around the five boroughs holding the former orange fire alarm indicator lights, which were all decommissioned a few years ago. Rather than remove them, the city has decided to let them all stay in place for now.

It’s unusual to see a luminaire usually employed to provide roadway lighting affixed on a short bracket like this; it illuminated a narrow driveway. It’s still there, though it has lost its glass reflector bowl.

ST. GEORGE to TOMPKINSVILLE to PARK HILL to STAPLETON

This type of street lighting, with the fixture attached to an adjacent building, is common in older parts of European cities that have very narrow streets.