Boston’s North End is the “Little Italy” section of town. The predominantly Italian community known for its pizza, pastries, and cappuccino is full of small alleys and streets that are just slightly larger. The majority of the streets in the North End, with the exception of a few main thoroughfares like Hanover Street, are one way and very narrow. Many of the North End’s alleys, if they’re not a street, lead to private residences, businesses, or to other streets.

The North End has been home to wave after wave of immigrant populations: from the 1840s through 1870s, Irish fleeing the potato famine of the late 1840s moved in, including John “Honey Fitz” Fitzgerald, JFK’s grandfather, who spoke so affectionately of the “dear old North End” that his supporters became known as “dearos” during his political career. Poles and Russian Jews took the place of the Irish in the North End in the 1890s and early 1900s, but by 1920, the North End was almost exclusively Italian.

In 1919, one of the weirdest, and most lethal, industrial accidents in history happened in the North End on Commercial Street, when a tank explosion at the United States Alcohol Company flooded the area with over two million gallons of molasses, killing 21 and injuring 150.

From the 1950s through shortly after the turn of the 21st Century the North End was almost completely cut off by the John Fitzgerald Expressway, named for Honey Fitz, who would have probably decried it. One of the most expensive and extensive engineering enterprises in American history, the “Big Dig,” placed the expressway mostly underground, and once again connected the North End to the rest of Boston. 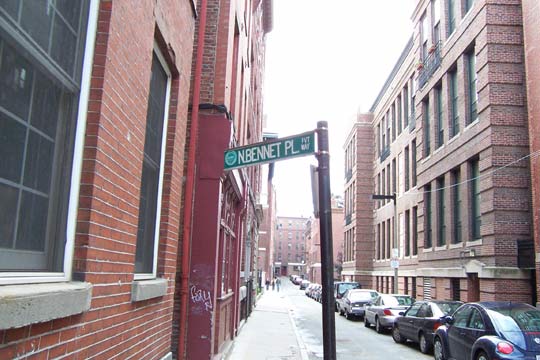 North Bennett Place, on the title card and above, is off of North Bennett Street, directly behind the North End Community Health Center. 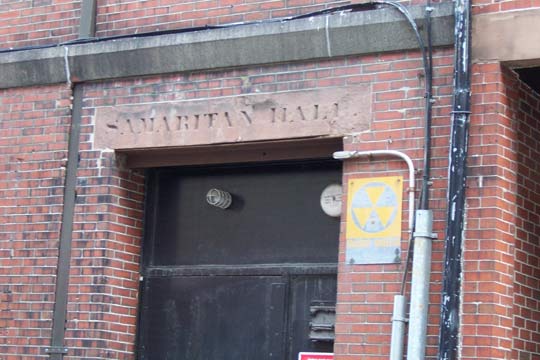 This door at the rear right side of the health center shows it was once called Samaritan Hall, though it is unknown what Samaritan Hall was. The doorway also still sports a Fallout Shelter sign, seen on the right. 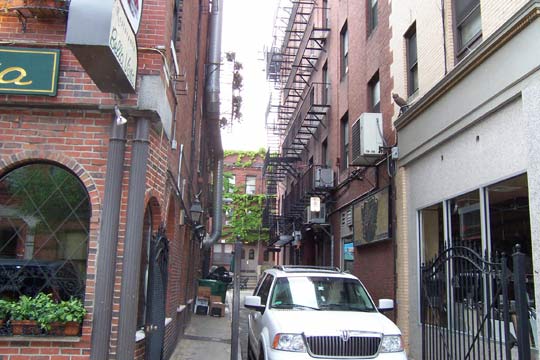 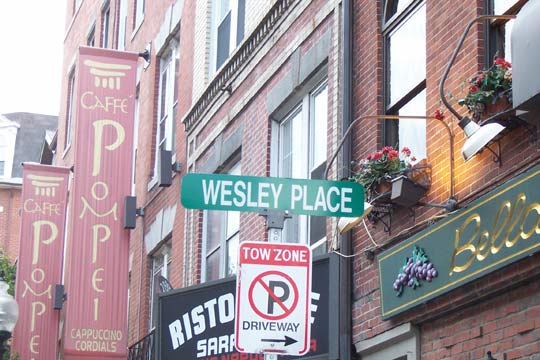 Wesley Place is a dead end off the North End’s main street, Hanover Street, just south of Prince Street near the Caffe Pompei. 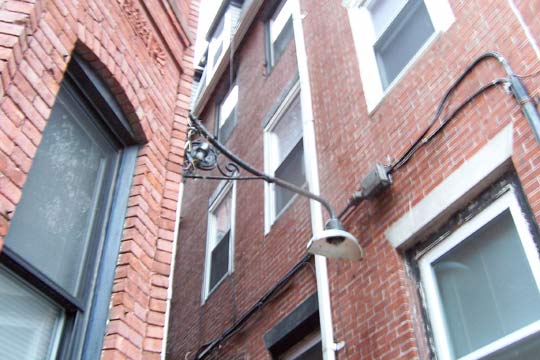 A particular aspect of the alleys of the North End is their many old-fashioned light fixtures hanging on wall brackets, many of which still sport incandescent bulbs with crescent-moon (above) or radial wave light diffusers. 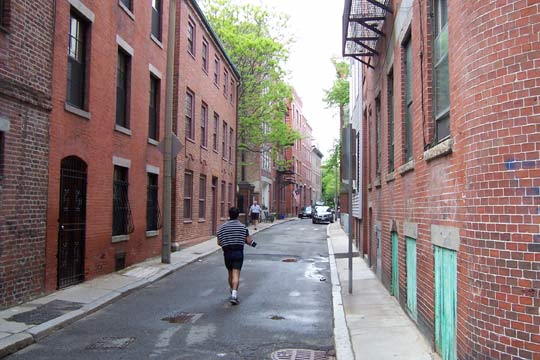 “An-thony!” Remember the Prince Spaghetti commercials from the 1960s, with Anthony running home through the streets of the North End, home where a heaping bowl of spaghetti awaited? Unity Street evokes the commercial for your webmaster, who’s old enough to remember it.

Unity Street runs between Tileston Street and Charter Street, and is narrow enough for one car to pass and a lane of parking. Like many other sections of Boston, parking is both scarce and in demand at the same time, so to prevent outsiders from coming into the city and parking for free while taking resident’s spaces, you must have a resident parking sticker from the City of Boston, or you face a ticket. This resident sticker program is employed in many sections of the city where parking availability is low and driveways don’t exist due to the close proximity of houses and buildings.

Unity Street is in close proximity to Old North Church and Paul Revere Mall, aka. “The Prado.” 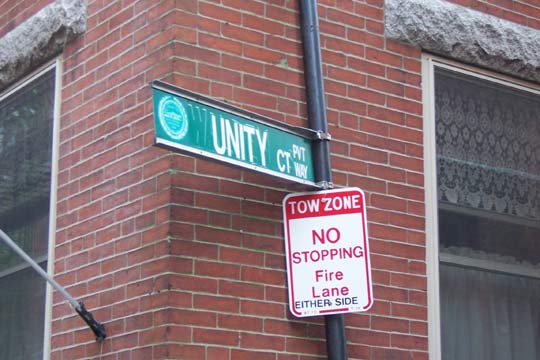 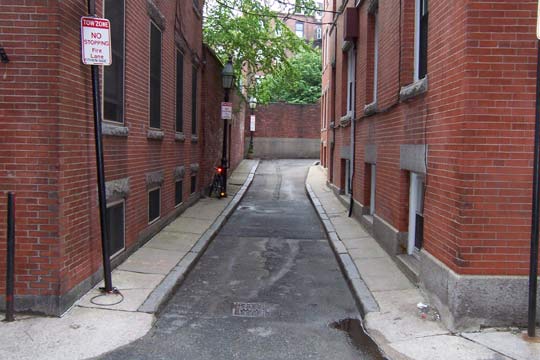 Unity Court, off of Unity Street. 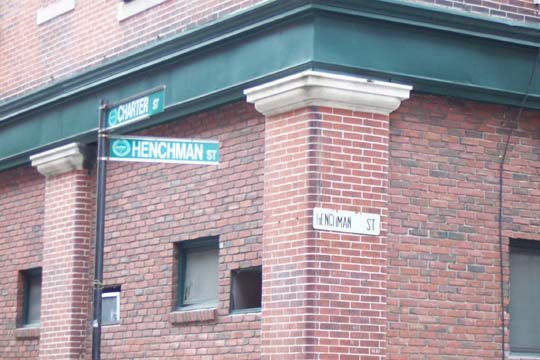 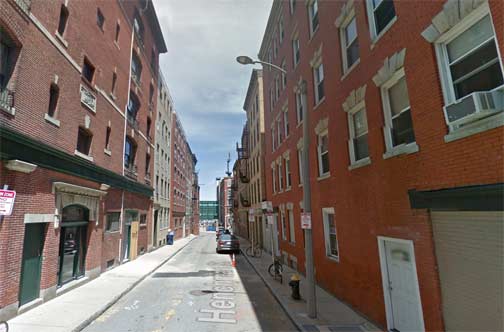 Charter Street, toward the western side of the North End in the vicinity of Copp’s Hill Cemetery, has a collection of short strets and alleys on or near it like Henchman Street, Greenough Lane, Foster Street, Foster Court, Goodridge Court, jackson Avenue and Michelangelo Place, many of which are too tiny to be included on most maps. As H.P. Lovecraft put it in Pickman’s Model:

What do maps and records and guide-books really tell of the North End? Bah! At a guess I’ll guarantee to lead you to thirty or forty alleys and networks of alleys north of Prince Street that aren’t suspected by ten living beings outside of the foreigners that swarm them… No, Thurber, these ancient places are dreaming gorgeously and over-flowing with wonder and terror and escapes from the commonplace, and yet there’s not a living soul to understand or profit by them. Or rather, there’s only one living soul- for I haven’t been digging around in the past for nothing!

Ah, well, nobody ever said Lovecraft was a tolerant type. 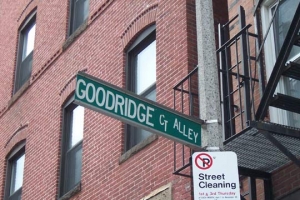 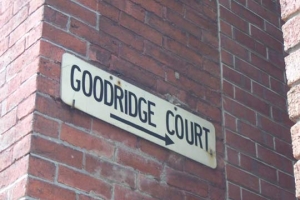 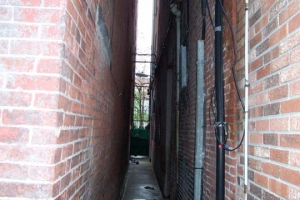 Possibly the narrowest named street in Boston, really a space between buildings, is Goodridge Court, on Charter off Henchman. The modern street sign has the word “alley” added to the end, which is rare as either court or alley are used individually, usually not simultaneously. The older white wall-mounted sign simply says “Goodridge Court.” Though it might not seem like it in the picture, the alleyway is large enough for one person to fit through to the back of the building. A wall-mounted luminaire can be seen in the top right of the photo. 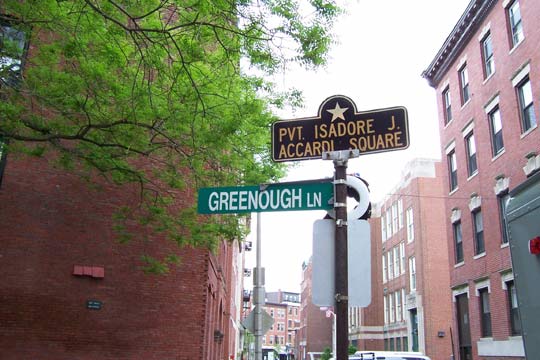 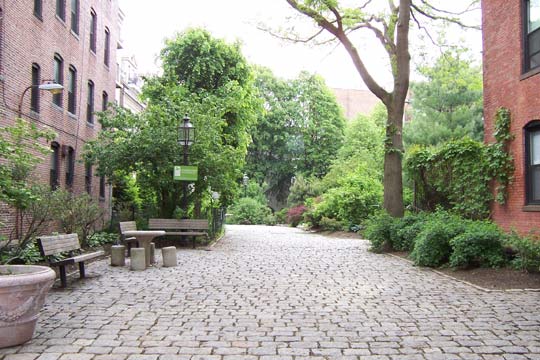 Back down Charter Street going toward Hanover Street is Greenough Lane, which is lined with cobblestones and leads to a park/playground. (It has been extended through to Commercial in recent years. Greenough Lane is possibly named for Richard Greenough, who sculpted the statue of Benjamin Franklin at Boston’s City Hall. 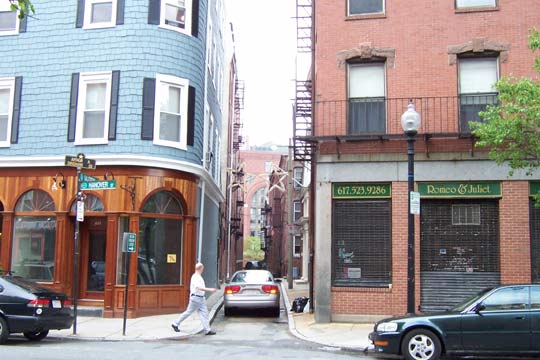 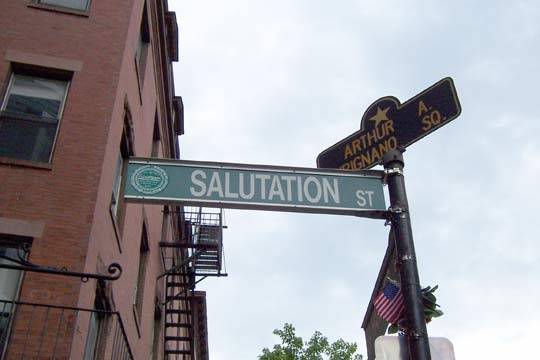 Salutation Street is a very narrow through street that runs between Hanover and Commercial, just south of Battery.   The street name goes back to 1708; here’s a photo from the 19th Century. 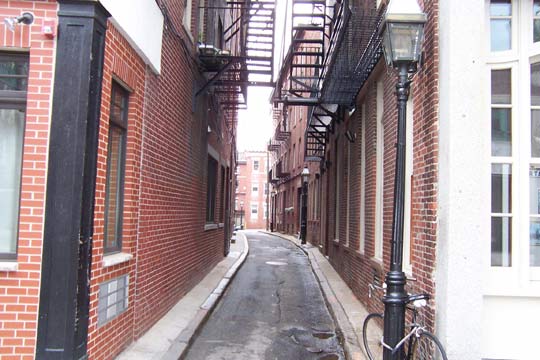 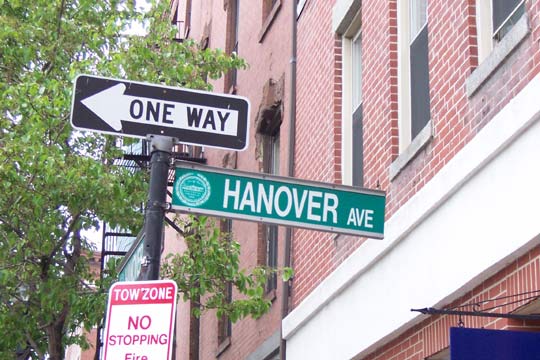 As a rule, avenues are wider than streets, but not in the North End, where Hanover Avenue, just south of Salutation, is a thin tributary of Hanover Street.

Very interesting study of “forgotten Boston alleys.” Please note that Goodridge Alley “possibly the narrowest named street in Boston” is the passage to a courtyard and residential property of 1-3-5 Goodridge Court. It is one of the earliest passageways in the North End and appears unnamed on the 1676 Clough map of Boston. It predates the layout of nearby Foster St. and the naming of the North End streets. I am the current owner of the property.