In my career in graphic arts as a proofreader, typesetter, copywriter, and mechanical artist (which are all, I realize, becoming jobs of the past) there was a time when I didn’t just sit in front of a machine, typing. I worked at Photo-Lettering, the biggest type shop in the city, proofreading, typesetting and later what was called “type specc-ing” or type specifying. There were all sorts of hard or clear plastic gauges used to measure type in point sizes (the size of the letters) picas (how wide a paragraph of type would be) and leading (how much space there was between baselines of each line of type in a paragraph). By the time I arrived on the scene, companies were using photographic type that was set on a console with a keyboard by entering lines of code. There was still a need, though, for estimating how much typewritten copy on a manuscript would fit into a particular space, and that’s where a type sample book, measuring tools, and a calculator came in. It was a craft in itself.

Before “photo-type” setting type was less of a craft and more like manual labor, as molten lead was used ane every letter was etched on pieces of metal. I’d go far afield if I got into details about “hot type”, but I’ll mention that the term “leading” referred to the amount of lead a worker had to insert between lines of type to add spaces between lines.

Later, I worked as a mechanical artist at a Long Island direct marketer. I’d employ pasteboards, T-squares and rapidographs to assemble artwork and type as advertisements done at set heights and widths, foillowing instructions from the art director assigned to the project. Again, it was a craft. However, I was hired because I knew QuarkXPress, the new layout software in the 1990s, and we soon shifted all our operations to the computer. 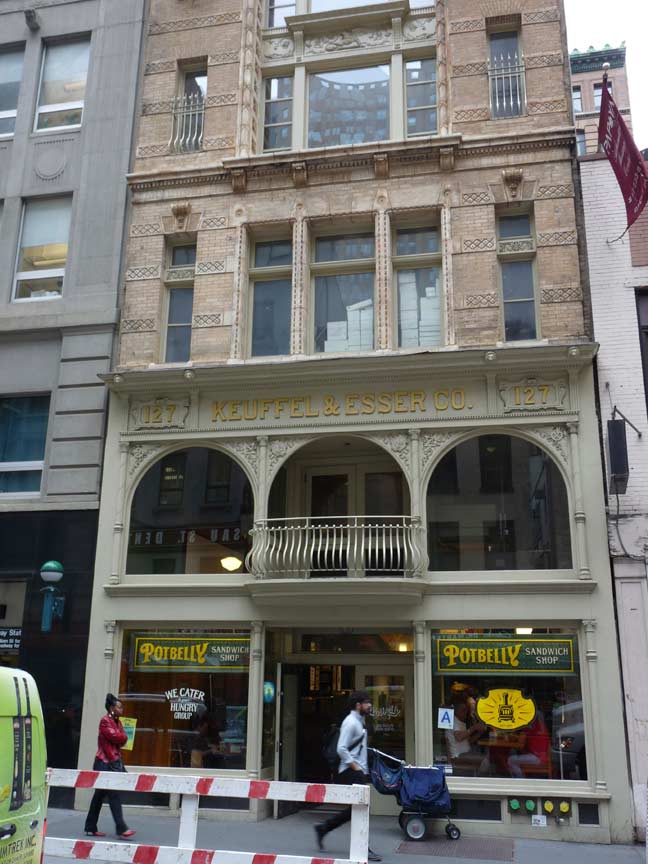 Which brings me to the Keuffel & Esser Building at #127 Fulton Street just west of the Seaport area. For years it was the home office and retail center of K&E, which sold drafting instruments and drawing materials beginning in 1876. 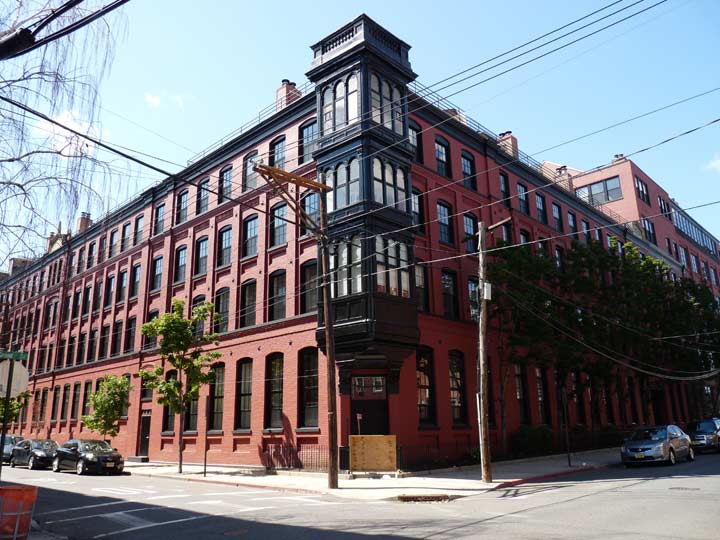 K&E built a four-story factory building in Hoboken, NJ in 1880 on Grand Street (the building still stands as residences) and in 1892, constructed their remarkably preserved Renaissance Revival building on Fulton Street. 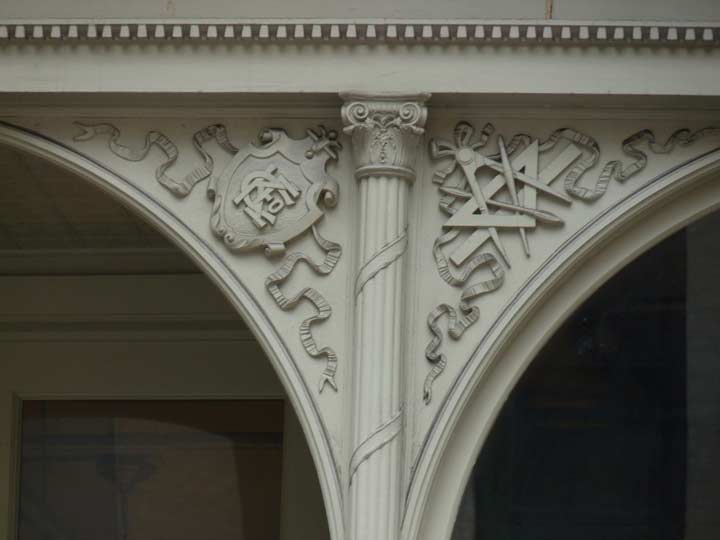 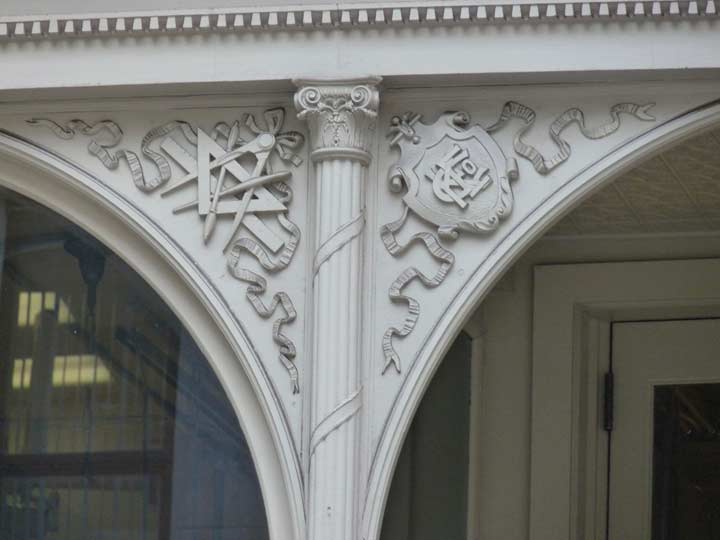 I mention my own career using typesetting and drafting tools because representations of such instruments were incorporated as friezes onto the exterior of the building, surrounding the second-story arched windows, along with an interlocking digraph with the company’s initials. 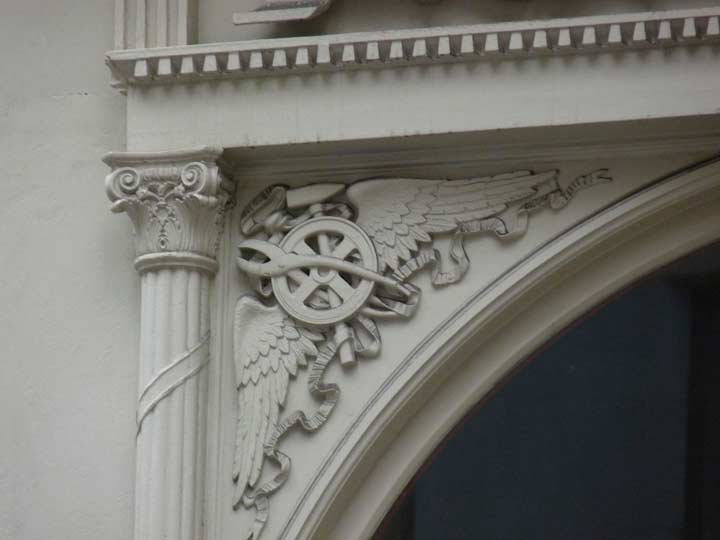 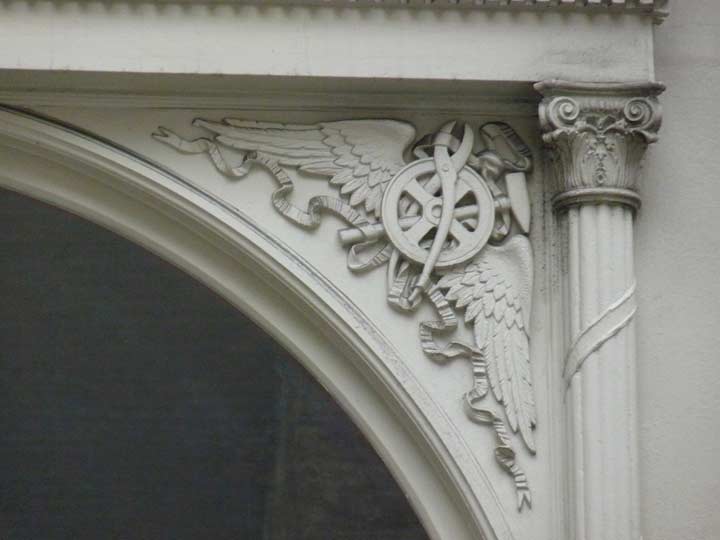 I have always admired this aspect of the K&E building and I was glad to see that the building exterior has been recently spiffed up and rehabilitated. 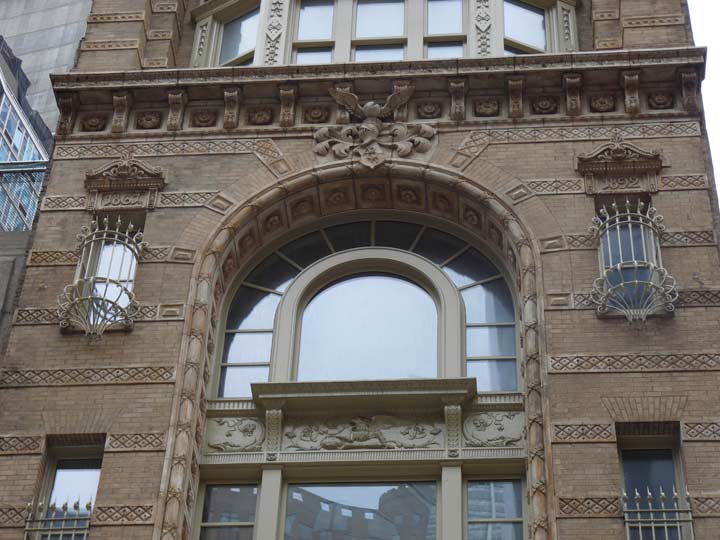 Almost despite themselves, K&E became one of the world’s largest manufacturers of slide rules, even though they weren’t all that profitable for the firm.

Keuffel & Esser Co., Hoboken, New York, sold and manufactured slide rules, drawing instruments and other technical supplies. Established in 1884, sold rules from 1886, began manufacturing their own rules in 1891 and continued until 1976. Over the course of their history Keuffel & Esser became the largest manufacturer of slide rules in the US. In 1967, Keuffel & Esser, commissioned a study of the future. The report predicted that, by the year 2067, Americans would live in domed cities (possibly influenced by Issac Asimov’s robot novel Caves of Steel) and watch three-dimensional television. Unfortunately for the company, the report failed to predict that slide rules would be obsolete in less than ten years, replaced by the pocket calculator. By 1976, Keuffel & Esser mothballed its slide rule manufacturing equipment and sent it to the Smithsonian Institution. They transitioned into CAD equipment in the 1980’s. [Slide Rule Museum]

K&E was finally acquired in 1987, but its Fulton Street and Hoboken buildings remind us that some things used to call for more craftsmanship than they do now.

COMING TO AN EL NEAR YOU…

I took Printing Shop in 1959 at Montauk JHS in Brooklyn. We had to find the lead type slugs in a big wooden, compartmentalized box, which I think was called a “California Job Case”, and set them into a metal tray. I was lucky if I could typeset a whole paragraph in a 50 minute period! I can’t imagine how many typesetters were required to produce a newspaper. I’m sure the method was obsolete by the time we took the class!

I am glad to say that I had a K & E slide rule back in the early 60s as a card carrying proto-nerd way before there was such a term. I wish I knew what became of it. If vinyl records have come back in a big way, I wonder if the slide rule could offer similar pleasure to the retro crowd.

Wow. I had forgotten all about the slide rules used in HS Physics class back in the dark ages, which came in plastic pocket protectors. K+E were the best and seemed like instruments instead of pocket calculators.

After 55 years I still have my K&E slide rule including the leather holster that came with a loop to hang it from your belt, right next to that fountain pen holder which was standard gear for us nerds back then. My drafting set though is by a company named Riefler.

As an engineering student, I owned a 12″ Pickett aluminum slide rule (and still have it in the leather pouch along with the instruction manuals). My brother had a bamboo K+E slide rule.

I still have a couple of K+E triangles and French curves, and a binder full of about two dozen varieties of K+E graph paper. Back in the 1970s, K+E had a store in midtown near Grand Central (I think it was on 42nd Street) and I recall making multiple trips there for graphing supplies.

In the 20s and 30s they started to get competition from jap companies which made their slide rules from wood and bamboo.
“Made in Japan”