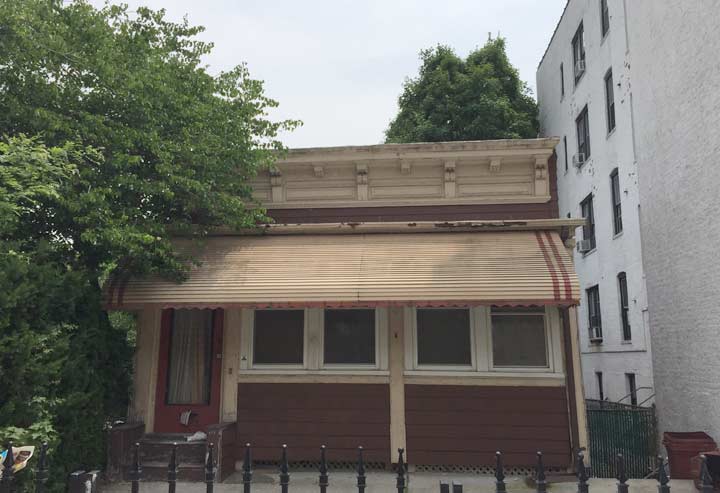 I need something cleared up.

I understand that Long Island City was a separate entity on its own prior to Queens’ capture by, er, consolidation with New York City in 1898, and that it encompassed Astoria, Ravenswood, Hunters’ Point, Blissville, etc. until that time, but these days, when referring to Long Island City, what specific area is it?

All that is beside the point of today’s post, in which I’m showing a pair of superannuated buildings on 44th Street south of Broadway that are as much as 150 years old. The first one is this one-story bungalow… 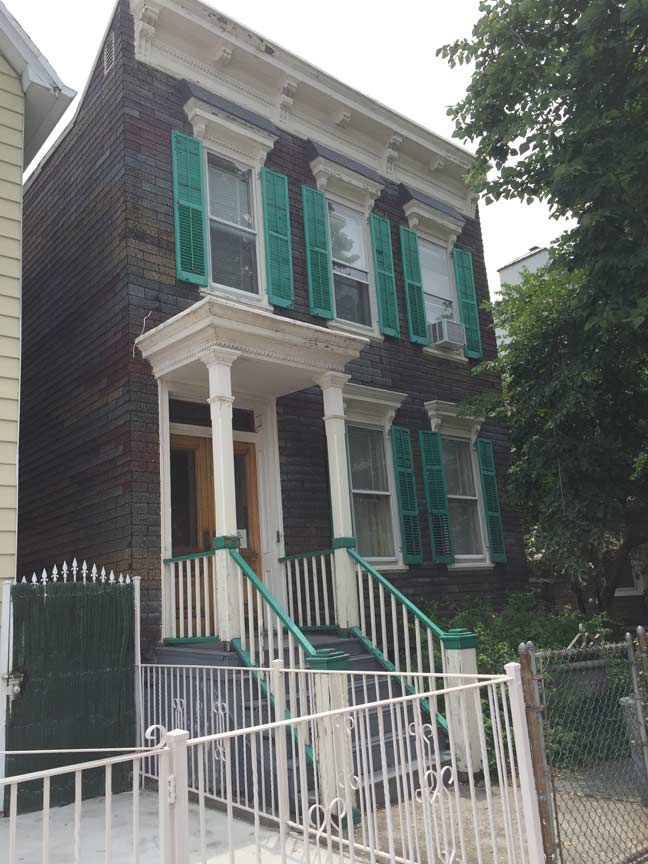 … and the other one is this 2-story townhouse with a large yard abutting the bungalow. It’s well maintained and has its original roof treatments and has kept its window shutters and window lintels and likely the entrance shelter is original, too.

Since Astoria/LIC isn’t in a district protected by the Landmarks Preservation Commission, both these buildings, as well as the other oddities you find on the side streets around here, are vulnerable to demolition and development.

I lived in Astoria for three years and there was no real consensus on this. Most people seemed to not think of there being an exact border, undoubtedly because the hip and cool parts of each neighborhood are not adjacent, so there is a “dead zone” of stuff that only people like us find interesting between the two. Personally I always thought of the border as being 36th Avenue, there is a noticable change as you cross it. But then I’ve also heard people insist that Long Island City ends at 39th Avenue… and Long Island City High School is on Broadway.

Kevin:
Two items about Astoria/LIC–
Growing up there and living there for many years, we unofficially thought LIC began south of Broadway.
Also, some of the confusion had to do with the post office division of Queens into 3 large areas of Flushing, Jamaica and Long Island City, which included Astoria. So, in a way, you were in Long Island City even if you lived in Astoria.

My Astoria-living gut tells me that LIC is south of 36th Ave. and north of the LIRR tracks, extending down to Newtown Creek at Hunter’s Point.

Astoria is north of 36th Ave and north of the LIRR until the Amtrak tracks split off, then north of Northern Blvd. until the BQE. North of the Grand Central, the border shifts east a bit to Hazen St., north to the shore line.

I’m aware that this may be an expansive definition of Astoria. I once heard that Broadway was the Astoria/LIC border, but Broadway seems to be so much “of” Astoria that I’d feel strange putting the demarcation there. (And also, that would put my residence in LIC. 🙂 )

I think you’d be safe in saying that anything west of Steinway and north of Broadway is “Astoria,” while anything west of Jackson and south of Bridge Plaza is “LIC,” but beyond that– the question is whether those who live west of Northern to the intersection with Steinway, between Broadway and the Plaza, i.e., the 36th Av and 39th Av stations el train riders feel they have more in common with their northern or southern neighbors. Eastward of Steinway, say, Hazen or the Hell Gate Bridge tracks would be the far reach, I should imagine.

Wonderful trim work on the two story house but what the heck is that siding. It looks suspiciously like the only thing lower than aluminum siding. Rolled asphalt roofing material that has been embossed with a brick pattern & applied as siding. First saw this on Long Island 50 yrs back & it was cheap & ugly.

As a former resident of Ravenswood houses, Broadway was always considered the unofficial border between LIC & Astoria. And the oldtimers in the neighborhood said Ravenswood itself ran from around Broadway to where Queensbridge houses are now & from the river to around Crescent st. Open to debate, i’m sure.

Commented yesterday, but my post disappeared, lol. When I lived in Ravenswood the oldtimers used to say the border was Broadway seperating Astoria & LIC. And Ravenswood was from there to around where Queensbridge is & from the river to around 24th Street.

I lived on 31st. Ave- on the south side of the street- my address was LIC. 11106. People across the street, on the north side of 31st Ave. had an Astoria 11102 address. I always thought of LIC as being the area closer to Queens Plaza…….but officially, 31st. Ave. is the dividing line. But in speaking, I’d always say that I lived in Astoria!

Astoria is a neighborhood of Long Island City.