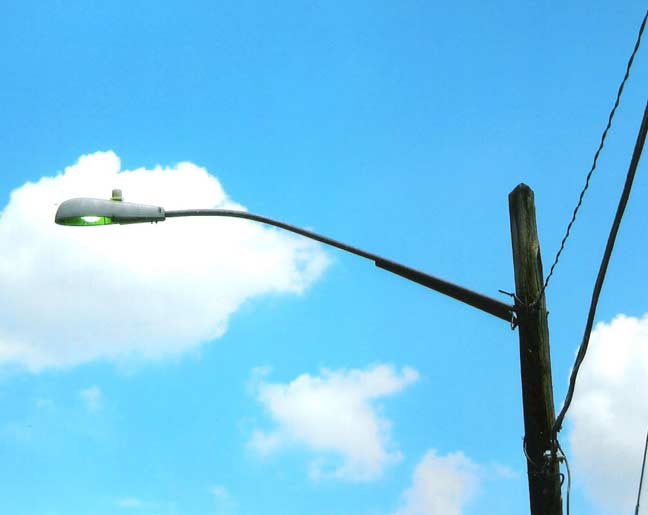 The Westinghouse MO-8 once lit NYC streets by the hundreds or perhaps thousands from 1962 to 1972. Known as “open-bottom” or “cutoff” luminaires, they were designed to illuminate residential or side streets without a glass reflector bowl in a somewhat dim, greenish white glow. They were the counterparts to the Westy OV-25, which had a reflector bowl and were employed on main streets.

Throughout the 1960s, they battled for supremacy on NYC streets with the General Electric M-400 (diffused) and M-250 (cutoff) lamps.

Though their demise began as early as 1972, when yellow sodium lamps began their lengthy reign, examples were relatively frequent until 2009, when the NYC Department of Transportation installed new models of an updated GE M-400 on virtually every lamp in NYC. Today, only six years later, they are succumbing to the new light-emitting diode (LED) lamps, which shine a brilliant white.

Where was that street lamp in the picture shown taken?

I fucking hate these stupid LED lights that the city is now putting up!! They just changed all of the lights about five years ago, which probably cost millions of dollars that the tax payers have to fork up. I remember as a kid growing up in the 80’s and 90’s, NYC had at least 20 different kinds of streetlight models on each pole. Ahh……..the good ol’ days!

This one looks like this one has original photocell on it too!
But can’t tell what lamp is in there….