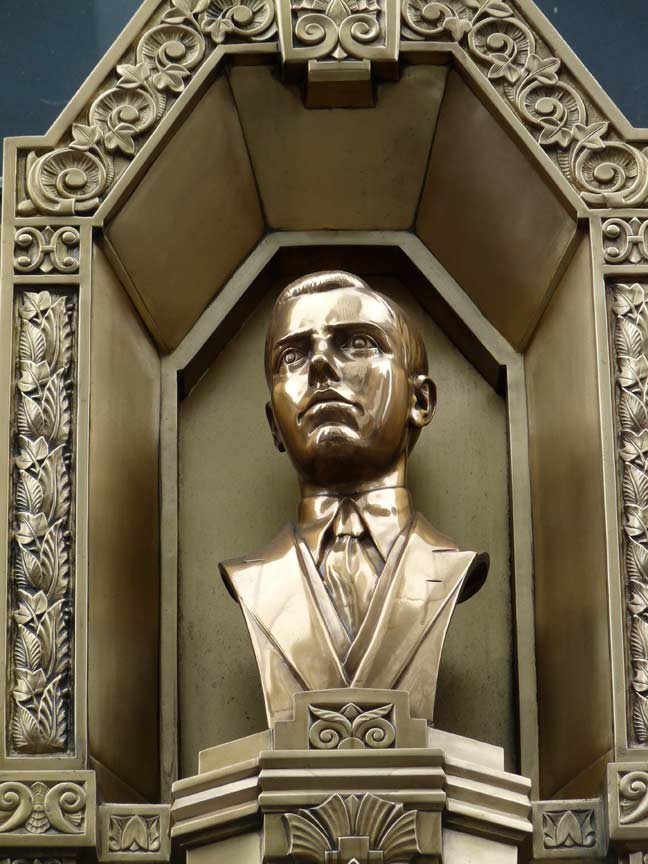 For years I had labored under the idea that the two busts (one above the door, the other on the top floor)  that you can see on the Brill Building, NW corner of Broadway and West 49th, honored someone in the Brill family for which the building is named. I was wrong about that. They honor the builder’s son.

In 1929, the Brill brothers sublet the site to developer Abraham Lefcourt to construct a new building by November 1931. Originally, Lefcourt planned to build a tower that would rival the Chrysler Building then rising on Lexington Avenue and East 42nd in height. But, two disasters befell the developer; the first was the stock market crash and economic cliff-fall of October 1929, and the other was the death of his 17-year-old son, Alan, from anemia. The building, known as the Abraham Lefcourt Building, was scaled down to a 10-story Art Deco structure that bear two unmarked busts of Alan. Abraham, meanwhile, defaulted on his sublease and the Brill Building acquired its current name in 1932. Abraham himself passed away that year.

Most pop music fans know the Brill Building as a center of music publishing where, by the 1960s, hit after hit was turned out by songwriters such as Neil Sedaka, Howard Greenfield, Carole King and Gerry Goffin, but it had been home to big bands and jazz bands of the likes of the Dorsey Brothers and Duke Ellington as early as the 1940s.