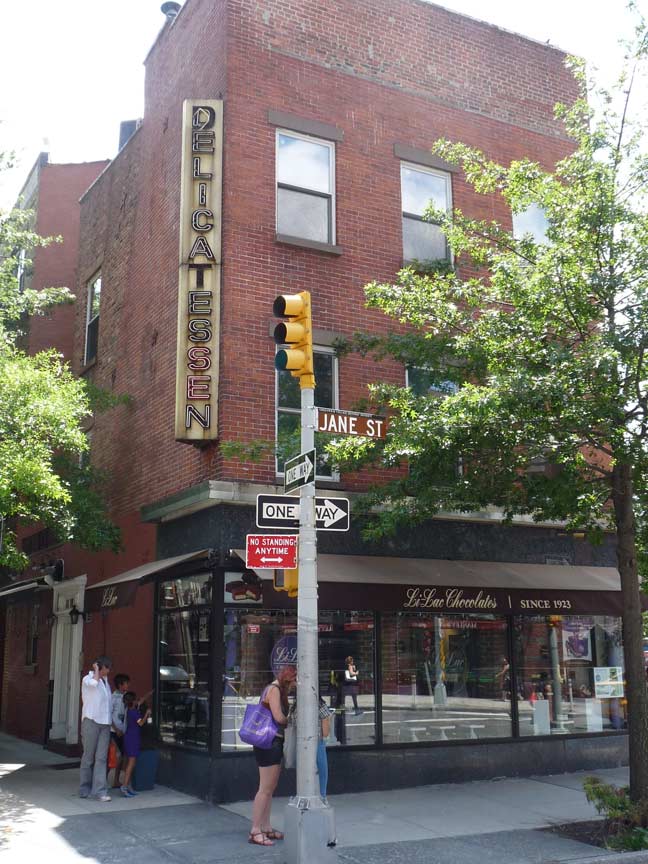 I have written FNY over 16 years (as of 2015) yet, a large number of items have escaped my view over that time, such as this neon vertical sign for a long-vanished deli on West 4th and Jane Street, just off 8th Avenue. The space is now occupied by a fancy-Dan chocolatier (I’ll take Hershey’s or Riese’s peanut butter cups. I probably couldn’t tell the difference in a blind taste test). One wonders how long it’s been since the deli was there.

Also of note is the cylindrical stoplight stanchion. It’s taller and thicker than the standard issue; these are placed in locations where the huge guy-wired stoplights won’t fit. They are relatively few in number. They also serve as a handy mount for no-standing, one-way, and NYC Landmarked District street signs.

La Parisienne was the name of the deli.

Anyone have a photo of the original La Parisienne deli on West Tenth and Hudson Street?

Yes, there were a number of La Parisienne’s around the Village into at least the mid-80s. The chocolate shop, btw, is LiLac, an old Village establishment that opened on Christopher Street in the 1920s. We used to get it as gifts for house visits, etc. when we lived around the corner on Barrow Street in the 70s, 80s and early 90s. From their site, it looks like they moved their retail space north and their production to Brooklyn in 2005. http://www.li-lacchocolates.com/About-Us_ep_7.html

If you can carefully position yourself in the middle of the intersection of W 4th and Jane, in google streetview, the “sen” in delicatessen is lit. How odd is that?

The Li-Lac chocolates were superb and probably still are. I used to get Li-Lac chocolates from the Christopher St location and recall being told that the owner on passing away gave the store to his employees who were now running it. My father used to bring a Li-lac assortment home every once in a while when I was a kid and it was always cause for celebration. I recommend you check out this old-school chocolatier. Still with us, should not be forgotten.

I’ve lived in that building for almost 15 years. I have a lot of information about it – from former tenants (Philip Seymour Hoffman; my apt.) to the restaurant and then deli that left around 2000 and 2003 respectively. Andy’s Deli was there for many years. The sign still works, but recently only the SEN. Not sure who controls it. If you ever want more info, let me know!