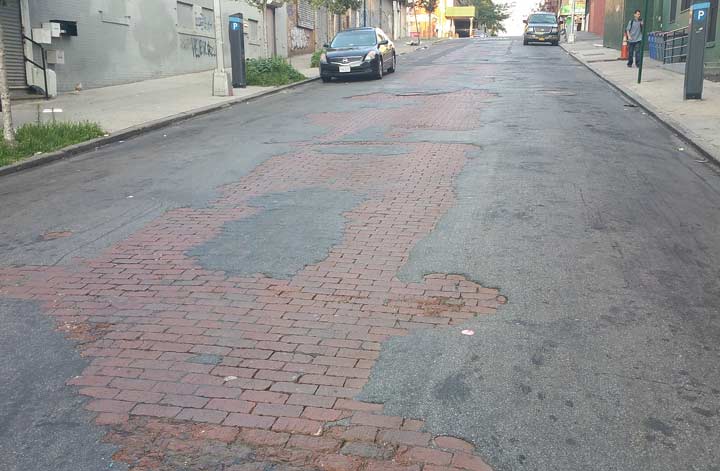 Enough asphalt has worn away on East 151st Street between Melrose and Third Avenues to allow some of the old red bricked pavement to show through.

Belgian blocks used to be the pavement of choice in NYC before asphalting took over, but there are occasional red brick pavements still around, such as West 230th Street in Kingsbridge Heights, Oliver Place in Bedford Park, 88th and 89th Avenues in Jamaica, and Bennett Place in Bay Ridge.

What timeframe would red brick been used vs Belgian blocks?

Kent Avenue, at one time, was also paved with red bricks from around Broadway to Williamsburg St. Too bad they were removed when DOT tore it up during the early aughts.

There red brick exits from the BQE in Queens as well.

Neighborhoods like the Hub, a major retail center located in the Melrose area in the heart of the South Bronx, where East 149th Street and Willis, Melrose and Third avenues converge, are reaping the benefits of the renewed interest. This area is the next frontier,” said Adelaide Polsinelli, a broker with Eastern Consolidated, which is handling leasing at at least two retail properties along the Third Avenue strip.

perhaps the last one in brooklyn