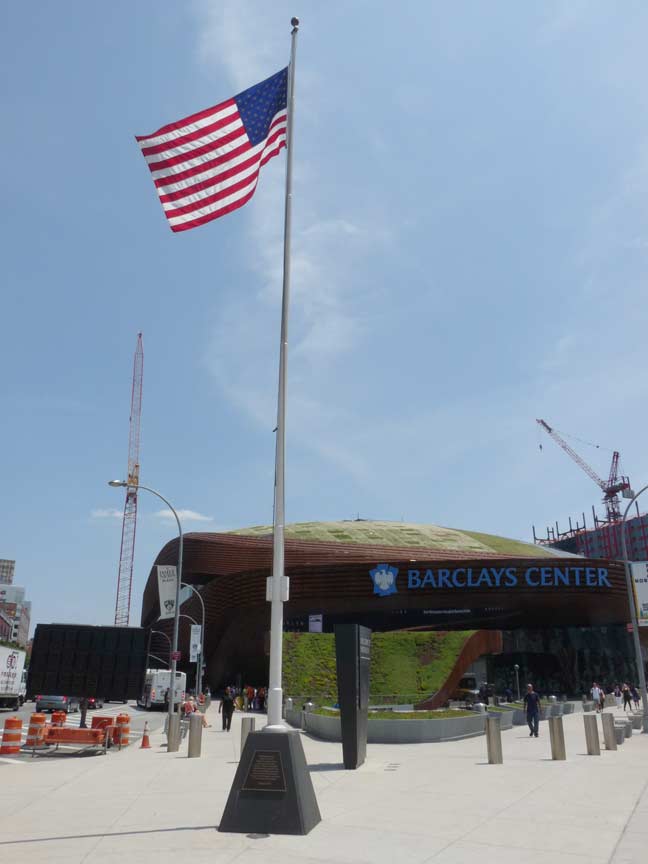 Few sections of Brooklyn have changed more than the eastern end of Downtown, about where it meets Fort Greene, at the confluence of Flatbush and Atlantic Avenues. I was a daily commuter to this part of town beginning in 1971 and for about ten years after that, attending Cathedral Prep High School and later Saint Francis College.

At that time this was home to the crumbling Long Island Rail Road terminal, constructed in 1908 but then pretty much left to deteriorate; its demise came in the early 1980s when only the underground section of the terminal remained, and a new station building didn’t appear in the early 2000s until it was constructed as part of the Atlantic Terminal shopping mall project. For twenty years, an enormous hole in the ground replaced the terminal building. In the 1970s, meat wholesalers still occupied Atlantic Avenue frontage, and I occasionally walked to school dodging hooks on which meat carcasses were swinging.

The “V” formed by Atlantic and Flatbush Avenues was home in those days, and into the 2000s, to a used car lot as well as the Underberg kitchen supplies office building. In the late 2000s, the controversial Atlantic Yards project wiped out blocks of factory buildings and dwellings along Pacific Street on the south side of the railyards, and Barclays Center, the home of the Brooklyn Nets and beginning in 2015, the New York Islanders, appeared.

When Barclays opened in 2012, an item harking back to Brooklyn’s last major league sports arena was installed at the corner, the Ebbets Field flagpole that was the last one in place after the 1957 season, after which the Dodgers left for Los Angeles. After Ebbets was demolished in 1960 the flagpole was moved to an American Legion hall on Utica Avenue in East Flatbush, which later became a casket company and a community church. Original Atlantic Yards developer Bruce Ratner acquired the flagpole in 2007, and it was re-dedicated when the arena opened in 2012.

I grew up in East Flatbush and there was a row of Ebbets Field seats also in front of a business onUtica Ave. near Glenwood. Have no idea if it’s still there.

The funny thing is — that particular flag never flew over Ebbets Field. It has 50 stars, and Ebbets Field met its well-documented fate in 1960.

Is there a pub or restaurant that has Ebbets Field of Brooklyn Dodger memorabilia?

Do you happen to remember the name of the used car business that was there? I’d like to find out if they relocated, or find the owners.