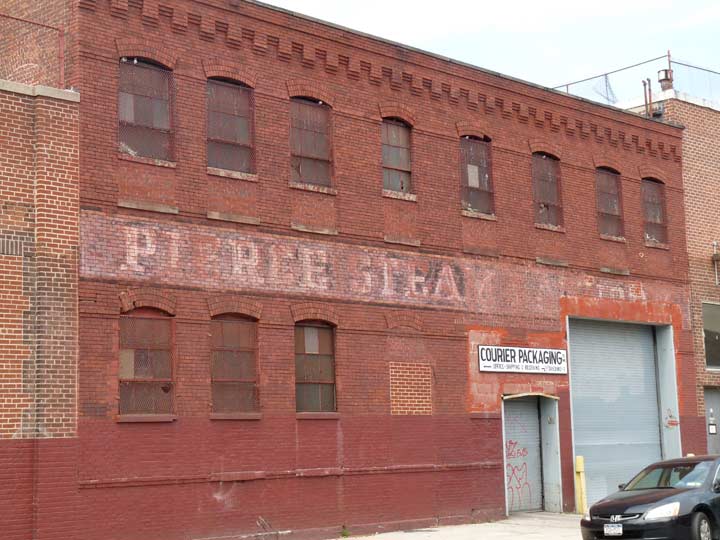 Ancient painted words on Freeman Street near West say “Pierce Steam” something. I’d say it was likely Pierce Steam Heating, founded by John B. Pierce and Joseph Bond in 1881. By 1892 it had merged with two other companies to form American Radiator, so if this sign refers to Pierce Steam Heating, it — and the building it appears on — are no younger than from 1892. For the most part it’s holding up well.

[The building may not be quite that old; see Comments]

WASHINGTON HEIGHTS TO YANKEE STADIUM, via THE HIGH BRIDGE, Part 2

The Pierce firm at this location actually appears to be a laundry outfit according to employment ads in the Brooklyn Daily Eagle from around 1944.

Additionally, the city database dates the building circa 1931. Tertiarily, Pierce Steam Heating appears to have been a Buffalo business concern.

Dept. of Buildings uses “1931” to date a lot of old structures for which it doesn’t have an exact year of construction. There are numerous structures in Greenpoint and the surrounding area, which I know for a fact were constructed in the mid-late 19th Century, that DOB lists “1931” for Year of Construction. 55 Franklin St. is one of them. It was once occupied by Wm. Gaskill & Son, which Produced nuts, bolts and other ironwork. The company had been at this address since at least 1887. The brickwork (brick arch window lintels were popular in the 19th century) looks like it was constructed around the 1880-1890 time period. It shares similarities to the Greenpoint Metallic Bed Co. building on Green Street, between Franklin Street and Manhattan Ave., which was also constructed during the same time.

Not the first time FNY has noted this location:
https://forgotten-ny.com/2005/05/greenpoint-top-to-bottom/

How soon we forget! 🙂

MY DAD WORKED IN THIS BUILDING IN THE 1940s WHEN IT WAS THE PIERCE STEAM LAUNDRY OWNED BY A WONDERFUL MAN NAMED PHIL JACOBS….