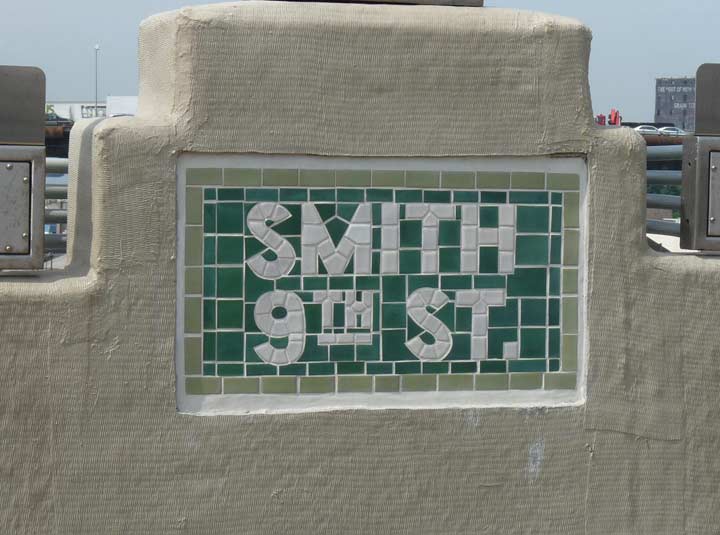 Two years ago [2013], when I checked out the rebuilt Smith-9th Street station serving the F and G trains, I was disappointed to see that the exterior identifying station plaques were photographs cemented onto the old stanchions.

However, I’m happy to report that the artisans have come through and produced brand new versions of the mosaic tiles, which are faithful restorations of the former ones.

These are the only IND station ID mosaics that appear on an elevated structure; the Independent Subway, which began construction in the late 1920s, built just two elevated stations in Brooklyn in 1933, the tallest station in the system, Smith/9th (tall enough to let tall masted ships on the Gowanus Canal) to pass beneath it; and the 4th Avenue station, lower because it is built just west of a tunnel entrance.

The IND intended to build some els as part of its “Second System” that would have built subways out to the hinterlands of Brooklyn, Bronx and Queens, but the Depression and WWII forever scrapped such intentions.

Note the green tiles with a light green border. IND tiles do have a color coding system, but it has nothing to do with symbolism or nomenclature. A group of local stations will have the same color tiles, but the color changes once an express station is reached. Thus, tiles on the F/G change color from blue to green south of the Jay Street station. They change to gold at the next express station, 7th Avenue.

I’m glad to see the MTA re-created the station name tiles, they look great. Are they going to restored, repaired, replicate the interesting light fixtures that once stood atop the signs?