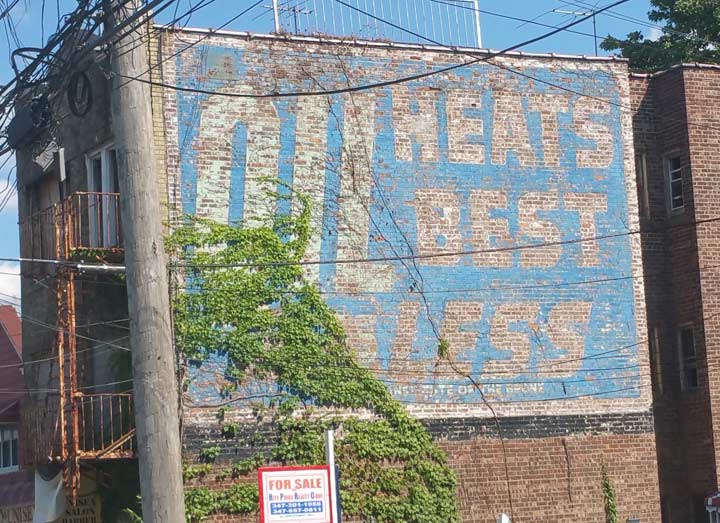 By GARY FONVILLE
Forgotten NY correspondent
This well preserved ad on 233rd Street, near Paulding Ave in Wakefield, the Bronx that extols the virtues of oil heat proclaims a fact that used to be true. But the use of oil as fuel has declined precipitously as the choice of homeowners.
In fact, according to my research, oil is only used by 8% of homes, mostly in the northeast United States.
As a homeowner, I can personally vouch for natural gas’ advantages. Natural gas’ rates are not volatile as they are with oil. Since natural gas is mostly produced domestically, prices are reliably stable.  Oil prices can fluctuate, mostly upward, anytime there’s any disturbance in the Middle East.
If there’s a huge snowstorm, and your street is impassable due to heavy snow accumulation,  you’re out of luck. Natural gas, which is delivered through pipes, is always there at the ready.
Since oil is inherently a dirty fuel, maintenance cost are higher, as your chimney has to be cleaned by a qualified technician on a regular basis.
And finally, the smell.  Oil furnaces leave that funny smell in your house when the furnace is on.
Full disclosure:  I am not in any way affiliated with any natural gas company.  I’m  just stating the facts.
7/30/15
BronxWakefield
7 comments
FacebookTwitterPinterestLinkedinEmail
previous post

I agree with you…Oil, which was the predominant heat installed in the 6 story elevator apartment houses built in NYC in the 20’s and 30’s, was dirty also and left residue in the apartments around the heat radiators….I grew up in a 4 story walkup, built in the early 20’s..We had coal fired steam heat until the mid 50’s when they switched to Natural Gas….

I recall a huge tank in the Coney Island yards when being driven as a kid to my aunt’s in Bath Beach. Near the southbound side of the overpass the display on the tank read ‘Gas Heats Best”.. Or did I dream that up?

I forgot to mention another negative aspect of oil heat. It’s that dreaded oil tank that often takes of valuable basement space.

Those sound like good arguments, but gas doesn’t give you the Vijax Man, who backed his truck down our narrow, hilly alley, and operated strange, smelly machinery, to the fascination of local 5 year -olds. For a time, we backed our tricycles through the alley too.

A huge sign on the side of an oil tank in jersey said that GAS heats best, as if in retaliation.

The house I grew up in in upstate NY was first heated by coal, then oil and then heat. Although I do not remember the coal, I do remember the furnace. This Gigantic box shaped thing in the basement encased in asbestos wrapping as were all the pipes that sprung out of it like a giant octopus.When I first knew this beast she was fed oil from a tank that was in the back of the cellar in a dark and spooky room. As a side, the house I owned had the oil tank buried outside next to the house, which eventually had to be dug up. Back to my childhood home, I remember when the oil furnace well, and the big truck that used to come down the street to make deliveries. I don’t recall any funny odor in the house, but there was a definite oil smell in the basement. When my parents decided to convert to gas, it was a big deal. They actually got rid of that beast and in its footprint was this tiny little box. . . the new gas furnace. We were all amazed at how small it was, and also how efficient and how that tiny little gas fired unit could keep this two story house toasty warm in the coldest of winters. Fond memories of furnaces!!

I should have proof read, my first line should read. . . heated by coal, then oil, then GAS. . not heat. sorry