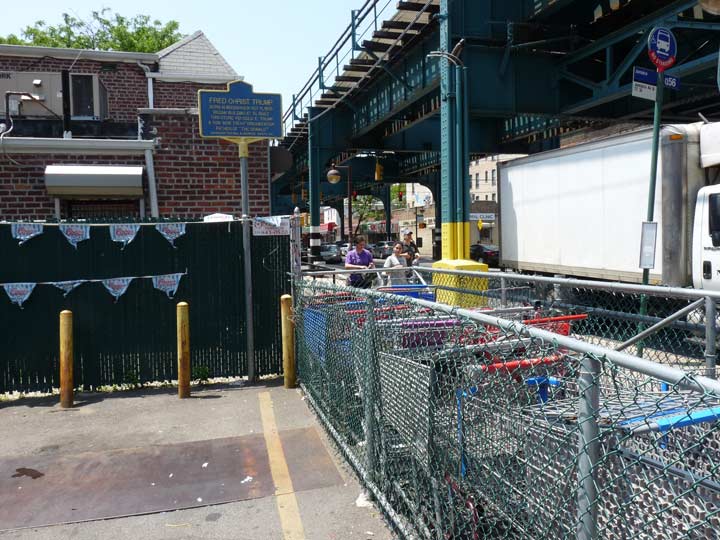 Fred Trump began building middle-class houses in Queens during the 1920s and built Trump Market here at Jamaica Avenue and 78th Avenue in the 1930s; he sold it to King Kullen shortly after he opened it, and there is still a supermarket on the site. Trump Village, the project for which he is best known in Coney Island, was constructed in 1963. He married Mary McLeod in 1936 and had five children, Maryanne Trump Barry, Donald, Elizabeth, Robert and Fred Jr., who passed away in 1981. One of his many philanthropic efforts helped fund a pavilion in Jamaica Hospital that bears Fred and Mary Trump’s names. 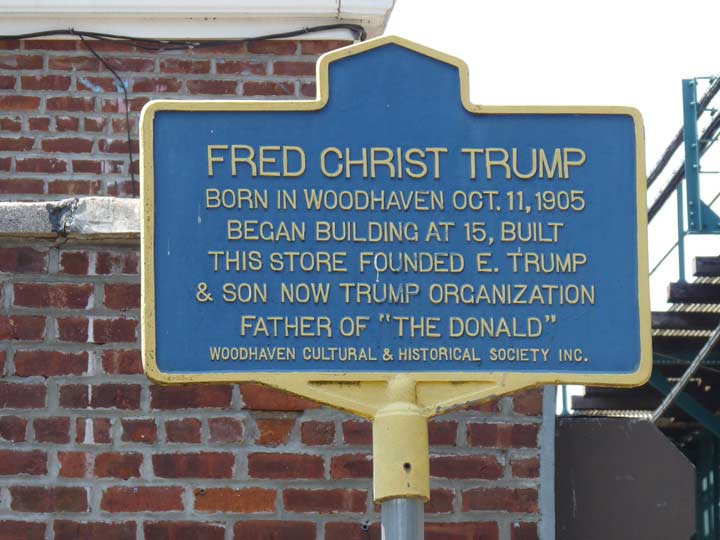 The “E. Trump” referenced on the sign comes from Fred Trump’s very first entrepreneurial effort, a construction business, founded when he was still  in his teens. He partnered with his mother, Elizabeth, who signed checks since he was still too young to do so.

In addition to Trump Village, Fred Trump also built the Shore Haven (Bensonhurst) and Beach Haven (Coney Island) projects. He employed his personal secretary, Amy Luerssen, for 59 years, and at his death lived with Mary Trump in a Jamaica Estates house he built in 1951.

New York Times: Fred Trump was a builder who loved his work. You can still see his achievement throughout Brooklyn today: hundreds of houses and apartment buildings, all of them dapper but not fancy — like him — and made of solid materials. Trump’s properties were maintained to a fare-thee-well. Brick was repointed; ironwork repainted. Signs over perfect lawns speak in Fred’s stentorian tone: ”Positively No Ball Playing Allowed.”

More at his obituary column in The New York Times.

I’ve always said that though he moved on to Manhattan, part of Donald Trump never left Queens. I’ve explained to my AZ neighbors why this is a net positive. It’s a said commentary on the political class that a NYC billionaire is the one populist in the hunt. (Hipsters, please, no snarky lectures; it only highlights how out of touch you are).

Last week the Village Voice reprinted a 1979 Wayne Barrett article about Donald Trump that has a lot of interesting background on Fred Trump, particularly around the financing of Trump Village.

Fred Trump had four children. You neglected to mention his daughter, Maryanne Trump Barry, Senior United States Circuit Judge of the United States Court of Appeals for the Third Circuit.

I worked as a concierge at Trump Tower back in the mid ’80s – mid ’90s and had the privilege to know the entire family. Fred Trump was down to earth, friendly and very generous to everyone. He and Mary, his wife were the nicest people you could ever meet. They were unpretentious and never were condescending or patronizing to any employee. Truly a great man.

To me he is best known for making a party out of the demolition of Steeplechase Park in 66,
complete with beauty queens lobbing bricks through all those panes of glass.

Fred’s middle name is Christ. Is that why Donald seems to think he is the second coming?

I am an ex-New Yorker currently living in California, and have defended Donald Trump’s business achievements against several vicious attacks in major media venues by ignorant — and probably jealous — readers. In one letter to a small New York newspaper (not against Trump) I mentioned that Ted Cruz’s ignorant attack on “New York values” was personally insulting to me as an ex-New Yorker and that (1) the world would be a better place if all nations embraced those New York values, and (2) those New York values have served me very well in business and my personal life since leaving New York.

Now, I have just recently become aware of Mr. Trump’s ties to Woodhaven (through his father.) I knew that there was something missing from my admiration for him. We both have Woodhaven values in our genes! Mine started when I attended St. Thomas the Apostle. Those New York values were further reinforced when I attended Brooklyn Tech and, later, Rensselaer Polytechnic Institute in Troy, New York.

With those Woodhaven and New York values instilled in Donald Trump, in my opinion, he could become of our best Presidents. I’m consider myself very fortunate to have grown up in Woodhaven.

Fred Trump was no friend of the people of St. Thomas the Apostle parish, I assure you. He was a proud Protestant, and, though not charged, at least seemed to be marching in an anti-Catholic rally in 1927, after he left Woodhaven and its values behind: https://www.washingtonpost.com/news/the-fix/wp/2016/02/28/in-1927-donald-trumps-father-was-arrested-after-a-klan-riot-in-queens/?utm_term=.d20cdf6fb64d

Fred Trump had FIVE children. You have left out Elizabeth, who was the middle child. Maryanne was the first born, then Fred Jr., Elizabeth, Donald, and Robert.

Fred donated to the church I attended as a child. I’d rather not give any more info as currently there is a huge IRONY going on. A journalist should research it, would make for a good story or even a movie ;0P