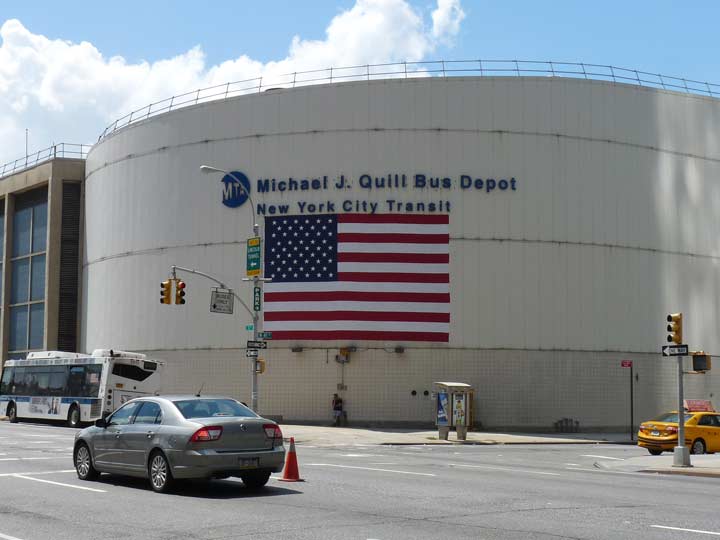 The MTA’s Michael J. Quill Bus Depot sits at 11th Avenue and West 41st Street at the entrance to the Lincoln Tunnel. Labor leader Quill (1905-1966) was the founder of the Transport Workers Union (TWU). He is, perhaps, best remembered for a quote after the TWU struck in January 1966 and Mayor John Lindsay had obtained a court injunction to force the union back to work. Quill and the TWU refused, and he was placed in jail for contempt. “The judge can drop dead in his black robes!” he railed. The strike lasted twelve days, and Quill had a fatal heart attack three days after it ended. 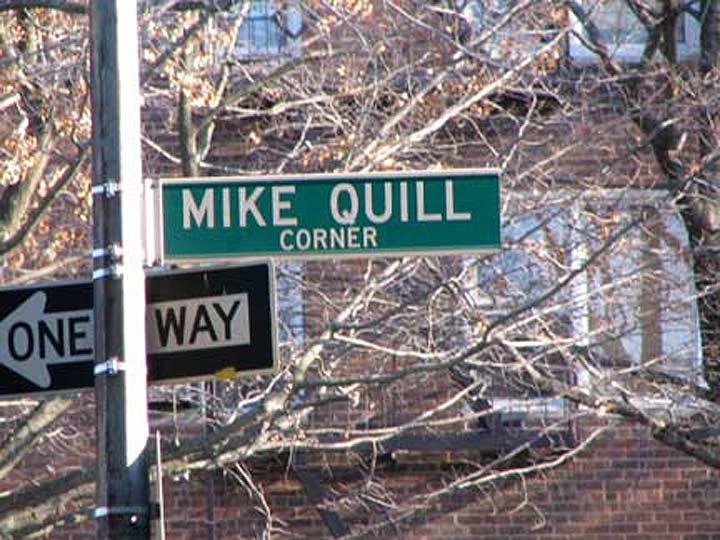 Quill is also remembered at the northern end of the line at the #1 train at Broadway and West 240th Street at the MTA’s 240th Street Subway Yards.

ALONG THE (OTHER) BROOKLYN WATERFRONT

The building was originally the Greyhound terminal in NYC.

In addition to the Manhattan lines that operate from there, a number of express buses from the outer boroughs spend the mid-day there to save wear and tear on the buses and fuel. The drivers can take a “shuttle” bus back to their home depot or stay in Manhattan for their PM trips.

It is interesting that Quill has an MTA building named after him. The adversarial relationship between Quill and the (then) Transit Authority management was extremely bitter.

I don’t think “Mayor Lindsley” as Quill called him would be too happy either.

There was much bitterness between Mayor Lindsay and Mike Quill to be begin with…Mr Quill had ranted and raved for years threatening to strike but never did and actually got along quite well with previous mayors, especially Mayor Wagner…

That was because Wagner (and his predecessors) always gave in to Quill at the last moment, and raised the fares to meet labor contract increases. In 1966 Lindsay held firm. The TWU was more corrupt than the Teamsters. Overtime was rampant because workers did their stint work in one hour, and spent the next seven in their lounge chairs. I know because my father was in the TWU.

Larry, there are some good videos on YouTube of Michael J. Quill, bringing New York to a standstill, I wish I could post them here for you.
My husbands cousin Michael, did so much and changed the lives of many for the better.
Rest in peace Dear Michael and may you never be forgotten..
Declan and Dolly Quill

I recall Mike Qill saying ” Mayor Lindsay can take his peanut package and give to the monkeys in the zoo “.

This was some year ! I recall the blackout of ’65 , riots in many cities, March on Washington , our country was racked by turmoil. The buildup began for Vietnam, civil rights protests and in my neighborhood, ” Jitterbugging ” was the thing for teens and those going to early 20’s. How many know what that term means. Or what a zip gun was then ?

Larry, there are some good videos on YouTube of Michael J. Quill, bringing New York to a standstill, I wish I could post them here for you.
My husbands cousin Michael, did so much and changed the lives of many for the better.
Rest in peace Dear Michael and may you never be forgotten..
Declan and Dolly Quill