Students, teachers and administrators on PS 36, on Castle Hill Avenue south of the Cross Bronx Expressway, if they even notice them, may be mystified about the carven street names on the corners of the building: “Avenue C,” “8th Street” and 9th Street.” The actual streets are named Castle Hill Avenue, Blackrock Avenue and Watson Avenue. 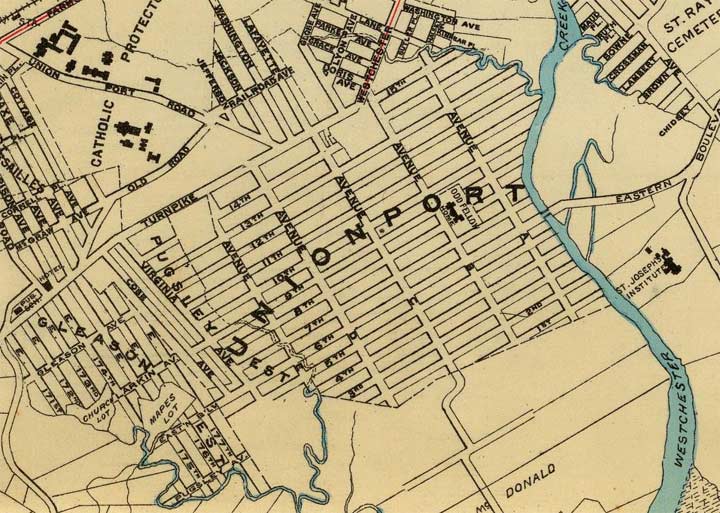 Unionport, laid out in 1851, was among the first towns in the Bronx to adopt a grid street system, and streets were named simply, by alphabet for north-south streets, by numbers east to west. Avenue A is now Zerega Avenue, Avenue B is now Havemeyer Avenue and so on. Its name seems to have something to do with the navigability of the adjoining Westchester Creek, and at one time it was hoped that a major port could be built here. 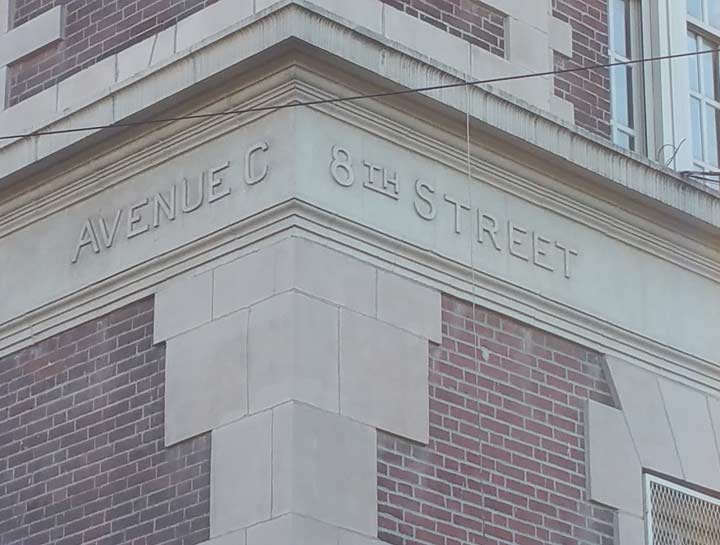 PS 36 was completed in 1901 and at that time, the bordering streets still carried their older names. Thus, the Blackrock Avenue side has “8th Street…” 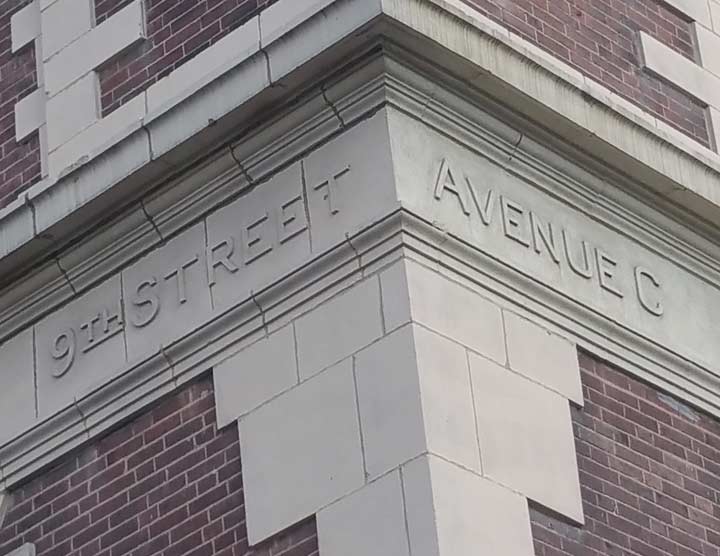 … and the Watson Avenue side carries the name “9th Street.” Both sides have “Avenue C” for Castle Hill Avenue.”

Soon after this, streets in Unionport were given different names and when adjoining neighborhoods were built up they did not extend the Unionport numbering system. In 1895, all of the Bronx became part of New York County, which also included Manhattan at the time, and in time, the house numbering became based on Manhattan’s; west of the Bronx River (and in some cases, east of it) Manhattan’s street numbering system leaches into the Bronx. The Bronx became a borough of its own in 1898, and a county on its own in 1914.

ALONG THE (OTHER) BROOKLYN WATERFRONT, Part 1

I was born & raised in the Parkchester section of the Bronx which is adjacent to this neighborhood. Parkchester was served by P.S. 106 on St. Raymond’s Avenue. Sometime in the late ’50’s P.S. 36 was closed for renovations & it’s faculty & students were reassigned to P.S. 106. Parkchester was a city within a city & we were very provincial so it caused mild culture shock (you had to be there to fully appreciate this). Somehow all survived the ordeal.

Another good one from Gary

Westchester Creek and Bronx River have Federally authorized channels. When I was working for the Corps of Engineers we dredged them by Federal contract periodically. With shrinking funds it now depends on how many tons of commerce move through the waterways for a dredging contract to be funded.

Very rare find, Gary. I had no idea that The Bronx had its own Alphabet City.

Sergio, Kevin wrote the text. I only took the pictures because U had known about those corner blocks for a long time.

Interesting…so it appears this part of the Bronx went the opposite as did Queens where names changed to numbers when the current grid system replaced the old names that date from when Queens was a collection of local villages? That’s a pretty elementary school.

What was the name of the music school on Castle Hill Avenue – Vinnie………………..?? Any help would be appreciated. Drawing a blank

I lived on Haviland ave across the hwy from PS 36 and went there as of 1951. My first girlfriend and first kiss was from Janice R.
On the second floor stairwell. I have great memories of that school and wonder if the two floor to ceiling paintings in the
auditorium and still there?

Cliff I made a general comment posted this morning that included an answer to your Q……Vinny Roberts Music Studio. Check out Karen’s full comment. Ed

As a member of the class of 1957, I would like to thank you for your research. You answered two of my questions:
a, When was PS-36 built.
b. The meaning, with documentation, of the enigmatic carvings.
Thank you again for this work.
B. Negrin

I lived on what would have been 14th St (Newbold Ave.) and attended PS 36 for only the 7th grade while we waited for JHS 125 to be completed. It was 1951-1952, when the Cross Bx Exwy was beginning to topple houses, cutting through our little ‘towns’ of Unionport and Castlehill. We could see and hear the work being done from the school windows.

I graduated from PS 36 in 1961. Never noticed the carvings shown

I went to PS36 from 1965 – 1972 Charles Elgart was the principle. I remember the carvings on the bldg yet never thought anything of it. At 60 I now look back and enjoy researching Different things about our history.

I went there starting in 1955. My kindergarten teacher was Mrs. Brady. I can still picture her. I then went to another school for 6th grade. Btw the name of the principal at PS 36 was Mr. Drescher.

Went to P S.36 from 1939 to 1947. Lived on Chatterton Avenue…1 block from the school which was on Castle Hill Avenue between Blackrock and Watson Avenues.

I went to PS 36 in 1960…bused from the Bronxdale Projects. This bio brings back memories of my
kindergarten teacher Ms. Kirshner. I then transferrl to PS 47 in 1st grade; when I was teenager I would
walk from Bronxdale to Castle Hill Ave with my then
girlfriend Teresa Moore…great times seeing that old
school building.

Cliff, I took clarinet lessons during 4th and 5th Grade at Vinny Roberts Music Studio. Funny, I started going to PS 36 when in 4th grade. I had asked someone (a teacher?) why the cornerstone doesn’t match the street names. I was told the original building was from Manhattan, taken down and reconstructured in the Bronx. Thanks for the research that busts that myth.