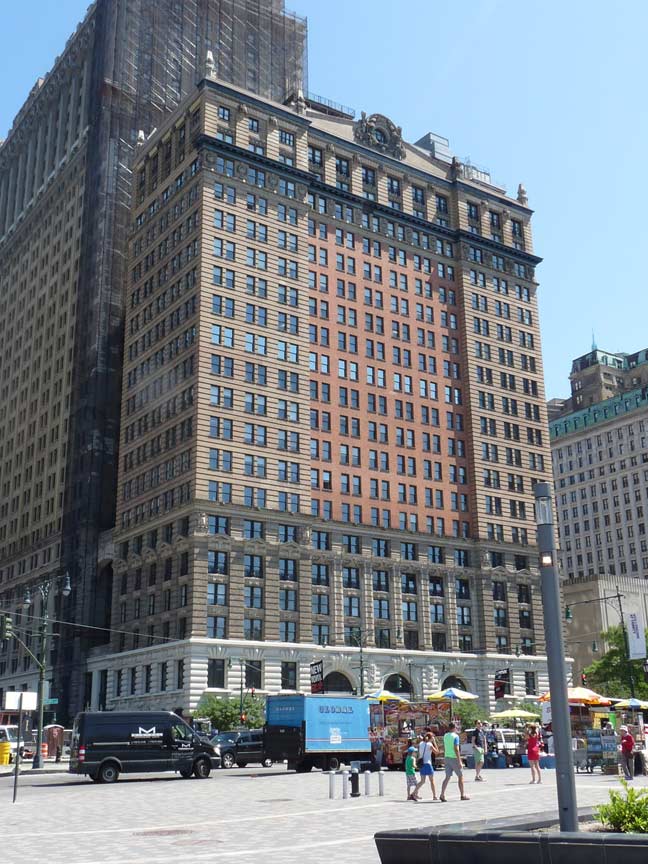 Seen prominently from the north end of Battery Park is the 20-story Whitehall Building at #17 Battery Place, constructed at the height of the Beaux-Arts era from 1902-1904. The architect was Henry Hardenburgh, who has many buildings around town, most notably the Plaza Hotel at Grand Army Plaza at 5th Avenue and Central Park. Shrouded in construction netting behind it is the Whitehall Building Annex, a 31-story tower completed in 1908. Though it was quickly superseded for the title, when it opened the Whitehall Building was Manhattan’s largest office building and took full advantage of views of the awe-inspiring New York Harbor. 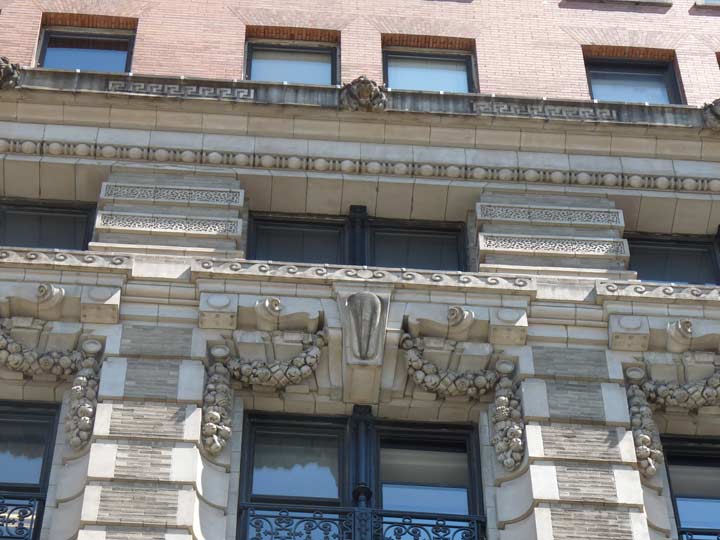 Hardenburgh used nearly the entire Beaux-Arts bag of tricks in the construction, with varied limestone and brickwork designs. Note the suggestion of undulating waves on the parapet in a building so close to the water. Above them we see some vermiculated blocks – they have designs cut in them resembling worm tracks. 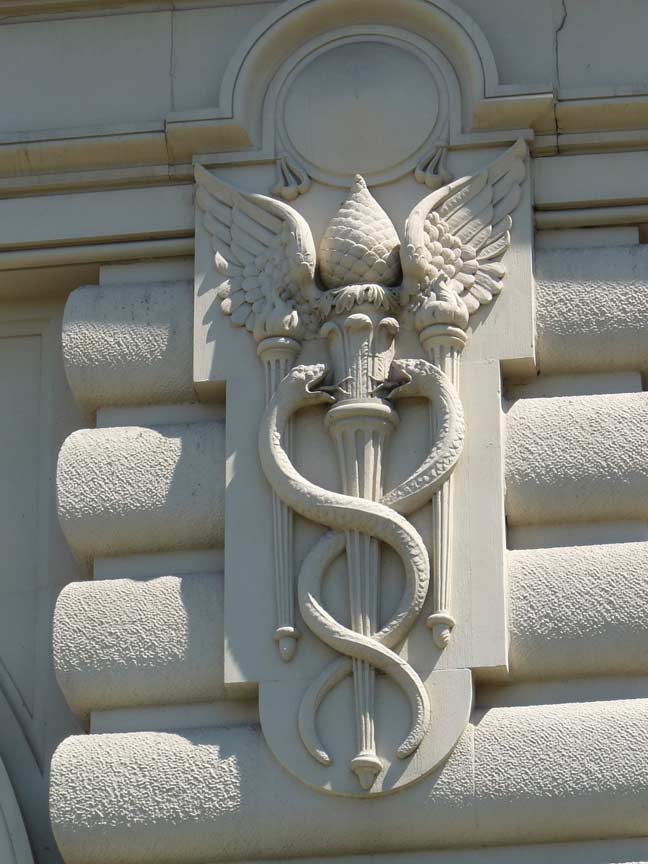 I had been operating under a false impression for many years. I assumed that every building featuring a staff with a serpent or serpents entwined on it had to do somehow with the medical profession. The symbol is associated with Hermes, the Greek messenger god (the Romans called him Mercurius) and it was generally found on commercial buildings from the 18th and early 19th Centuries. It was also used as a symbol for speed — a caduceus can be found on remaining stations or overpasses of the NY, Westchester and Boston Railroad in the Bronx, much of which is now the Dyre Avenue line (#5 train).

It’s a commonly made mistake equating the caduceus with the medical profession. In medicine the symbol is the Rod of Asclepius, which has one entwined snake, not two.

Since the building does not border Whitehall Street, one may wonder why this is the Whitehall Building. The building, as well as the street, are named for Peter Stuyvesant’s mansion, which was constructed in 1658 when he was Director-General of New Netherland. However, Stuyvesant didn’t give it that name. After the British took over New Netherland in 1664, they mockingly named it Whitehall, for London’s Palace of Whitehall, where Britain’s monarchs lived from 1530 until it burned down in 1698. Thus, Whitehall Street is one of the few street names bestowed by the British to remain unchanged after 1783 when they finally evacuated Manhattan after ceding government to the USA.

A mosaic representation of Stuyvesant’s house can be seen on the walls of the Whitehall Street subway station serving the R train.

This building housed the New York forecasting offices of the United States Weather Bureau (precursor of today’s National Weather Service). Presumably, there were weather instruments on the roof. The Bureau moved to what was the RCA building in Rockefeller Center around 1960.
They are now located in Brookhaven, Long Island where they remotely monitor the instruments near the Belvedere Castle in Central Park.

When joyriding on the Staten Island ferry in the 50’s, I would easily pick out the Whitehall bldg from the front of the ferry….Very pleasant memory..

And The Whitehall Club on the top floors. The place-to-be for lunch foranyone who was anyone in the NY shipping world

My father, Tony Rodriguez, was a bartender ther for 31 yearjs.

what were the names of the two main bar tenders, especially the one to whom we all chipped in for a bar of gold

My dad worked at The Whitehall Club any photos out there of the Club.

I would love to see vintage photos of what The Whitehall Club looked like inside around 1916-1930! My grandfather was involved in the ocean liner shipping world and his offices were in the Whitehall Building. Thanks!!

I have no photos, just memories. I worked at The Whitehall Club, either summer of 1982 or ’83. I was on summer break from college, and living at home in the Bronx with my family, which is where I was raised. I got the waitress position through a friend of a friend, who told me it was an all men’s lunch club where there is no tipping, no gratuity, and never an exchange of money. The club member simply signed the chit and just like that, the bill would be taken care of. I thought it was magic. At the daily staff mtg-one hour before lunch is served, we reviewed and were often quizzed on the menu items, which changed every day-what an education that was ! Everything, EVERYTHING had the upraised Whitehall crest: the water glasses, the plates, the linens, the rugs, the daily menu, etc. I couldn’t believe that the printer dropped off the daily menus every morning. The menu was nicer than my wedding invitations. It was thick white stationery with navy colored upraised embossed print. No prices were indicated either. I recall helping out once at the bar, and I thought it strange b/c it was all men. I recall the spectacular view from every window-wish I could go back in time and visit once more…

In my early twenties I had a job recording ships coming into NY Harbor from a window on one of the top floors. I forget who the employer was – might have been with the PA had to listen to Coast Guard calls as well. I was not that great at it.

think about it when I see that building. (I wonder if it was the Port Authority)

My grandmother Anna Conmy McNamara worked as first a waitress and then as the hostess at the Whitehall Club for decades! When she retired they thought she was 65, she was 84! She passed away at age 96 in 1971. She never forgot the kindness of the members to her and as a result her son, my dad, moved to Bay Shore-Brightwaters New York where many of the Morans and Torocomo’s (spell) lived!! The Whitehall Club has special memories for our family!

My father was assistant to Dr Kimball at the weather office on the 20th floor. We moved from Sandy hook nj where my father was in charge of the weather station there in 1940. Out family lived in west New Brighton Staten island and my father commuted by ferry boat. The Staten island ferry brought him within a close walk to the Whitehall building.
I was a high school student at Curtis high at the time and would visit his office occasionally along with my older brother. Great memories! Incidentally my brother and I both entered the weather bureau after WW2. J hand August 15, 2018

My great-grandfather Fillmore Condit was the New York agent of the Union Oil Company from 1904 to 1919. My mother remembered as a child visiting her grandfather in his office on the top floor (or near the top floor?) of the Whitehall Building and seeing all the ships coming and going in New York harbor.

My grandfather’s stock brokerage office (Breining & Company) occupied much of the ground floor offices from the mid-1920’s through 1953. He believed high-visibility offices promoted walk-in business. The Whitehall Building was often described at “The First Building on your right as you entered America.

He was also the President of the Whitehall Club for a number of years. He would apparently have lunch at the club every day. Very refined living – boy are those days over!

I must have been here a thousand times in the 70’s and 80’s to see my companies ocean freight forwarder and the many vessel line offices.
On July 4, 1976 my wife watched the fireworks over the Hudson… we were married a few hours earlier that day. We joke about having a million people at our reception.

I live in the apartments in the Annex (Ocean 1 West) and it’s very interesting to read you all’s stories of your times here. Happy to be part of the Whitehall Building’s history!

Oh my many memories of the Whitehall club lunching with my colleagues from Japan Line in the Mid 70’s. We were domiciled in One World Trade Center back then. I lived on Staten Island at the time. Took the ferry into battery park everyday. I sure miss those days. The shipping business was a fraternity of sorts gathering daily and nightly at the Whitehall Club.

I just discover the Whitehall as a result of looking for information on my French Italian Chef (Grandfather) Primo Mantegari. He listed it as his place of employment in 1942. He had quite a wonderful career at many hotels and finally Stonehenge, an Inn in Ridgefield Conn. Our uncle Raul Viarengo was at the Algonquin Hotel in the ’50’s. my email is trusert@gmail.com if there is any information to share.