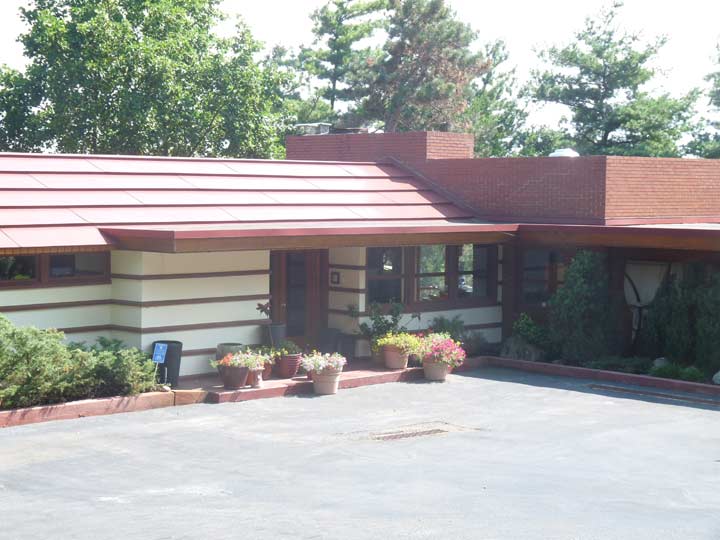 This beautiful building, #48 Manor Court in Lighthouse Hill, Staten Island, is Frank Lloyd Wright’s sole private home design in New York City, yet he never saw its completion, as it was finished the year he died, 1959. Wright did plan to visit the construction site in 1958 but illness kept him away.

The lengthy red and tan building is at the edge of Lighthouse Hill, 200 feet above sea level, and takes full advantage of the spectacular hillside and ocean views. It is in the mold of Wright’s famed “prairie” design ranch houses. The building was commissioned and built for New York personnel agency vice-president William Cass and his wife Catherine, who occupied it for forty years, selling it in 1999.

The Casses were fans of Wright’s work elsewhere in the country, and after seeing him on a Mike Wallace interview show in 1957, wrote the architect to inquire if he would build a house for them. Wright referred them to an associate, Marshall Erdman, a Lithuanian-born architect, who agreed to construct a design called “Prefab No. 1.” Prefabricated units were shipped from Madison, Wisconsin, and assembled here by another Wright associate, Morton Delson, who sited the house for maximum views of the valley and Richmondtown below.

The house is named for a copper beech tree that originally graced the property. A 1967 hurricane felled the original tree, but a new one was planted in its place.

Wright, who believed that a building’s interior furnishings should be designed in concert with the exterior, also designed the living room and bedroom furniture. A swimming pool was added in the 1960s as a break against forest fires on Lighthouse Hill.

Other Wright designs in the NYC area include the Solomon Guggenheim Museum on Fifth Avenue and East 89th Street, a Mercedes-Benz auto showroom at 430 Park Avenue, and the Ben Rebhuhn House in Great Neck Estates.

Unfortunately, the interior space at 430 Park Avenue was demolished a couple of years ago.