Years ago, when FNY was just getting started back in 1999, I got word that there was a hidden street in the Bronx, unmarked on maps and by the Department of Transportation. The alley; known as Garden Place, was accessible only by an alleyway on White Plains Road south of East 240th Street. I went up there, recorded the alley, which is a dirt road in a tough part of town, included it on my Bronx Alleys page, and mostly forgot about it afterward. 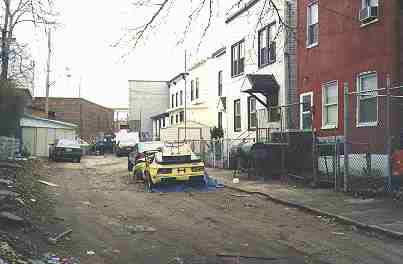 In 2015, I’m revisiting a lot of New York’s alleys because many of the photos I took with a film camera more than 15 years ago, were scanned at a 4″ width, and I now show FNY photos at 9 and 10-inch widths and blowing up such small photos to that width would render them fuzzy and hard to look at.

Here, I’m showing the image of Garden Place that I got in 1999. Since I don’t want to go to Wakefield during the week and pay the exorbitant weekly Long Island Rail Road and MTA fares, I asked FNY Correspondent Gary Fonville to see what he could make out of Garden Place these days. 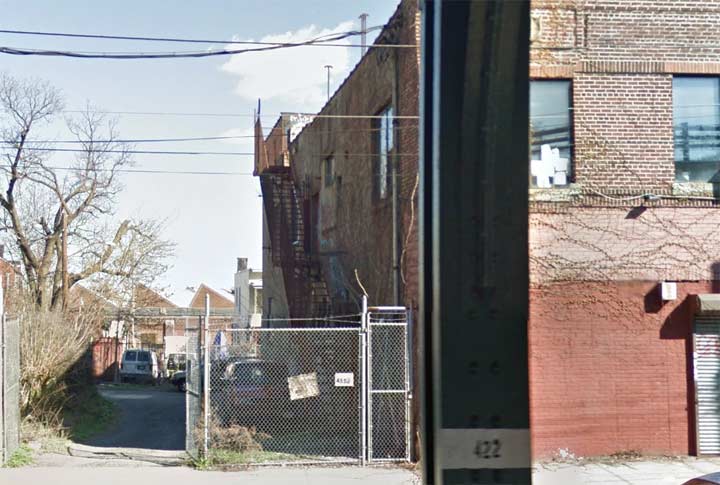 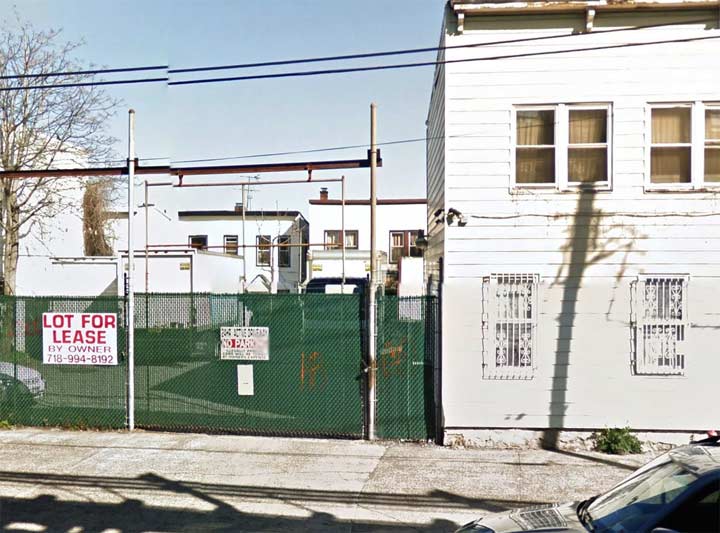 Unfortunately Garden Place seems to have been privatized, since both possible entrances on White Plains Road have now had fences installed. 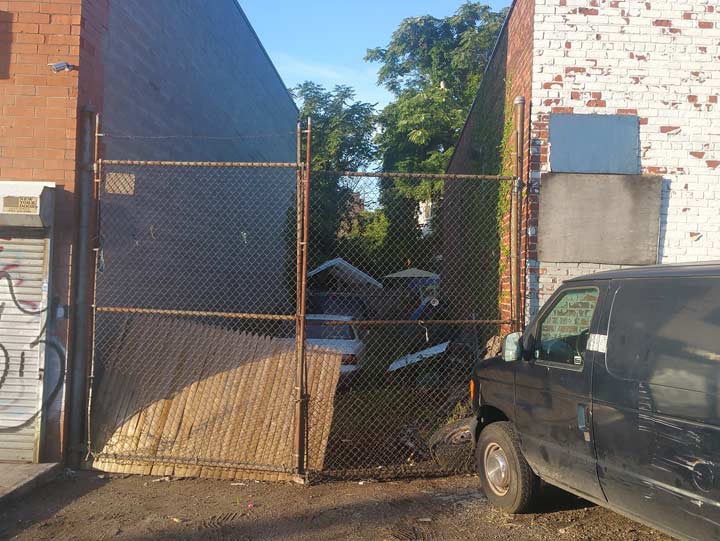 Going around the corner, Gary found another possible entrance from East 240th Street was also locked behind a gate. 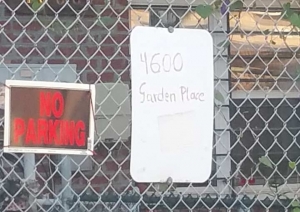 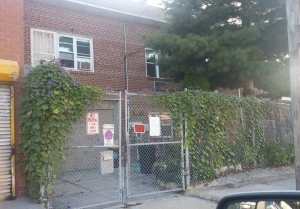 However, on the north side of East 240th Street, Gary found a curious thing. There’s another building behind a locked gate that is marked “4600 Garden Place.” But how could this be? Isn’t Garden Place’s north end on East 240th? Well, as the history reveals, not quite. 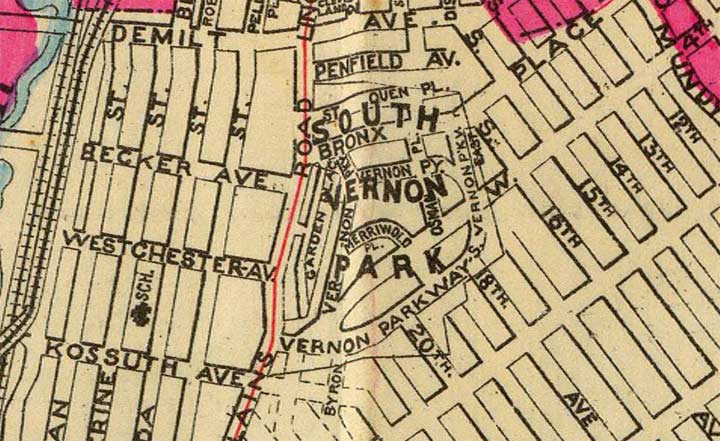 The earliest map in which I can find a reference to Garden Place is this Hyde map from around 1900, when Garden Place was part of  a (probably proposed) real-estate development called South Vernon Park, likely so named because it was just south of the town of Mount Vernon. Garden Place ran, then as now, just east of White Plains Road, with just an alley or two connecting the two thoroughfares.

Given the subsequent maps I discovered, I had doubts that South Vernon Park had been developed, since the late great Bronx historian John McNamara doesn’t mention it at all in History in Asphalt. However, I did find a 1935 court case that said it had been surveyed and laid out around 1890, became part of the village of Wakefield and was subsequently absorbed into the City of New York, which then included just Manhattan and the Bronx, in 1895.

On the map shown above, some streets are still on the NYC map: Garden Place, Osman Place, St. Ouen (Street) and Penfield Avenue. 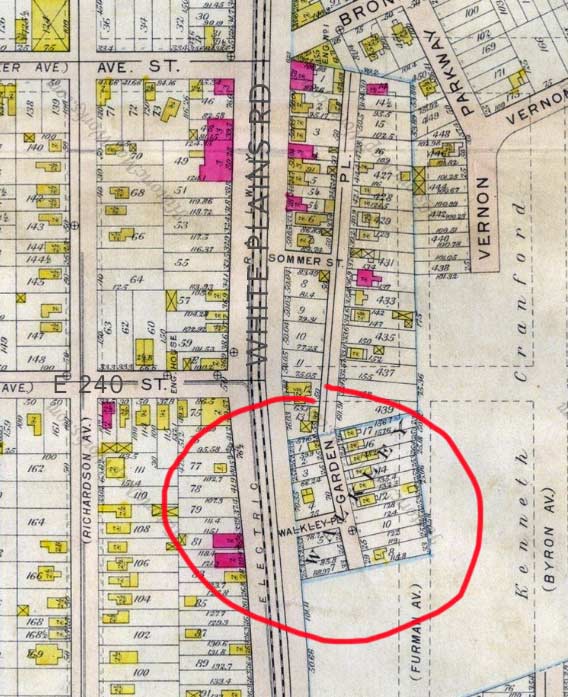 This map from just a couple of years later shows a much-changed situation. Only Garden Place remains, while the rest of South Vernon Park has been eliminated, if it was ever built. Since this map was made, East 240th Street has been extended east one block to Furman Avenue. By this time only parts of Vernon Parkway remained on the map.

Interestingly, one of the short alleys that today accesses Garden Place is still there today and was formerly marked as “Walkley Place” on maps.

White Plains Road was connected to this section of Garden Place by the now-vanished Sommer Street. 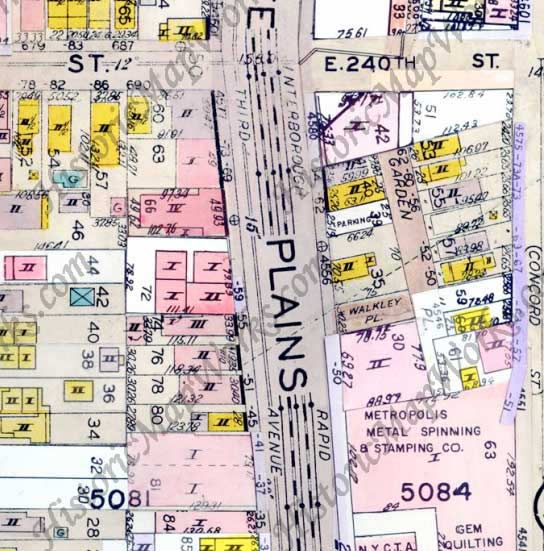 This map was drawn in the 1920s, but pretty much shows today’s situation, with Garden Place accessed by Walkley Place with about six homes located on its east side.  A short driveway is shown connecting it to East 240th Street today.

Since the mid-1910s the old South Vernon Park property has been replaced with a partial street grid, but also by a large train yard servicing the White Plains Road elevated. 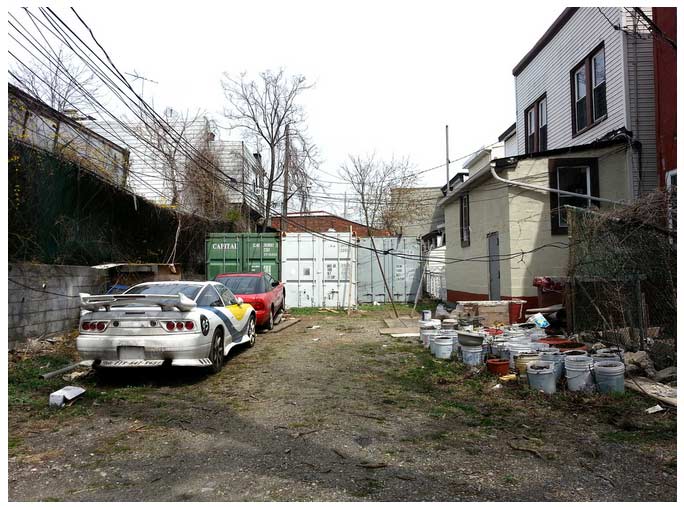 Finally, Matt Green of the site I’m Just Walkin’ in which he continues an ongoing project to walk every street and block in NYC, got this picture of the north end of Garden Place in April 2013; it still looks largely the same as it did when I saw it in 1999.

Now here’s Forgotten-NY at its best: old maps, in-person visits to the site and plenty of history.

Sergey Kadinsky (are you the author?). I am very interested in this history about Gardent Place and all the maps and photos you posted. Thank you for your pictures, research and detail…I am researching my family history. My mother was born at home at 4637 Furman Ave, a block away from this location in 1934. I’m interested in the histroy here from about 1930 to about 1945ish (more or less). I don’t know if a single family home existed there? (grandparents purchased) or if they lived in a high-rise apartment building there? My mom attended PS-16 and my aunt the middle school (what m.s. served that area back then?) I want to explore this area and check out Garden Pl. Is it safe? What are your recommendations? Thank you!

My husband and his family, grandparents and great grand parents lived on Garden Place. So they go back, I assume to the early 1900s. My mom told me that her parents were from Garden Place also. I wanted to find out if they lived close to each other thinking that they probably knew each other because Garden Place was only two blocks, I believe. My husband’s address was 4610 (house torn down now) but I can not find my grandparents’ address. I see on your map that each lot has numbers. I found out my grandparents’ address was 428. But by looking at your maps, I see that the lots were numbered 427, 428, 429 etc. Can you find out what address actually 428 was? Or what lot 4610 was and advise. I would appreciate it or can you direct me as to where I can find out this information. Thank you.

Mr. Walsh,
Thank you for your reply with the numbered homes on Garden Place. I will probably have to do more research to find the exact number of the home having lot 428. My husband studied your map and remembers
lots of information about the area – businesses, like the metal shop, ice house, lumber yard etc. He thinks 4610 Garden Place had a lot number of 433.

I own a house at 4563 Garden Place and 2 lots next to it. Some of the history I uncovered. The six private homes were all turned around when Furman Avenue was built. All of those homes had their fronts on Garden, and backs to what became Furman Avenue. The original street and curb still can be found on Garden Place. If you look at the houses, you can easily see the porches facing Garden Place. Walkley Place was originally called either Old McDonough or McDonough Place. And a major water main runs under Garden Place. The area (believe it or not) is quiet and we have not had a problem. I would say that all the houses on Furman Avenue are over 100 years old.

i am pretty good at discerning stuff like youmentioned. the 1st imaage in this article ccaught my eye as i said curbs but these are backs of houses now of course they were truned around for furman and that s why backs are here andcurbs were left from when as youj say these himes fronted garden place. do you know howmany entrances were ti garden place years ago? some articles images information at various times indicate (i am talking below e 240st. ) there were it seems 2 entrances on w plains rd and one on e 240 st, seems one on 240st used by a body shop did that become private a few years ago? 2 on w plains rd one thzt was walkley plc at one time do nt knoww if it still named that yoju saidit was in past mcdonough plc.? and a bit north of thjat seems there was another entrance closed now (how/why??). lastly they mention sommers st north of e240 st that was an access to garden plc but that is gonre somehow now, do you have info on it? thanks formyour time bob.

does anyone have infor. on what became of sommers street it seemsit was an entrace to garden place north of e 240 streeet but as said here and on google maps it is now a non entity. was it cosed off and sold by city to private people or integrsated somehow into surrounding streets? also i know as years go by stuff changes in odd ways. e240 st on google maps 4600 garden place is there but faces e240 strret any reason or knowledge why? seems fairly new house not one of those turn arounds to face 240st? of was it just given 4600 address by the post office when bukt? thankss. bob.

one last query that came to mind, if anyone knows or has idea(s) why? from google maps i seeas example 4569 was turned around and facing furman aveneu use to face from what i rrad gardent place the furtman avenue bldgs the whole lenght have 4 digit house numbers was it a case of garden place houses had 4 digits and they (post office?) just carried over 4 digit addressesto newly made furman avenue??

My grand parents live at 4560 garden place ,4575 furman ave. the neighbors on one side The Retta’s and the other side The Flanagan’s . It was the best time going there especially the chicken market. I was in shock how that man killed and prepared the poor chicken .I would walk around the neighborhood all alone as a kid with no worries and garden Place was not blocked off.