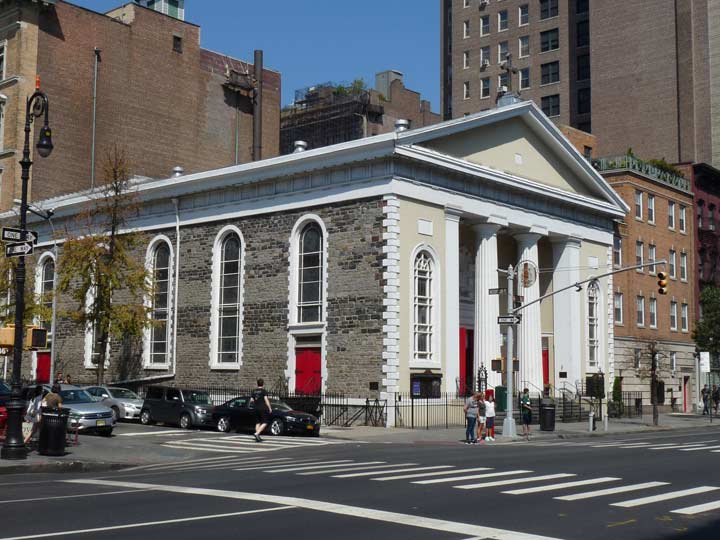 It doesn’t get a lot of ink in the guidebooks, but St. Joseph’s Church, at Sixth and Washington Place, designed by architect John Doran in 1833 (the date is prominent on the facing) is the 3rd oldest Catholic Church building in NYC (the Church of the Transfiguration, built on Mott Street, in 1801, and Old St. Patrick’s, built on Mulberry and Prince Streets in 1809, are in older buildings). It is a mix of Federal and Greek Revival styles. The facing is actually a later addition and the actual 1833 exterior walls can only be seen from Washington Place.

Though the location and walls are still those erected in 1833, the church has suffered several devastating fires over the years that have necessitated both the rebuilding of the 6th Avenue front as well as the interior and most of the stained glass windows. The last such restoration took place in 1992.

Kevin — Do you know the date of the colonnade?

My paternal grandparent’s parish. My Dad’s and Uncle’s names are included on the WWII plaque to the right. KIA’s are denoted by a star.

Actually, St. Mary’s on Grand Street is both an older parish (it was the third Catholic parish in the city, founded in 1826) and an older building. While you wouldn’t know it from the brick Patrick Keeley facade added 30 years later, the building behind it is the original Greek Revival structure begun in 1832 and dedicated in 1833. The sides are still stone, rather like St. Joseph’s, and it also originally had a portico, as can be seen in this photo from the Museum of the City of New York:
http://collections.mcny.org/Collection/%5BSt.-Mary's-Church-corner-of-Grand-Street-and-Ridge-Street.%5D-2F3XC5IWV6QO.html