Construction began for the Long Island Rail Road between Brooklyn and Jamaica, and points beyond, in 1836. The railroad ran down the center of Atlantic Avenue, a major route running from the waterfront into Jamaica. At first, all service was at grade level on the surface, but by the early 1900s, a series of tunnels and viaducts was completed that avoided conflicts with horse and wagon and later, automobile traffic.

One stretch of track on Atlantic Avenue was not placed underground or elevated for a long while: a stretch between Highland Park and Jamaica. This stretch remained adamantly at surface level until a tunnel was finally completed in 1942 that ran from the East New York station east to the Boland’s Landing workers’ platform in Richmond Hill. At that time, all passenger stations between East New York and Jamaica… except one, at Woodhaven. 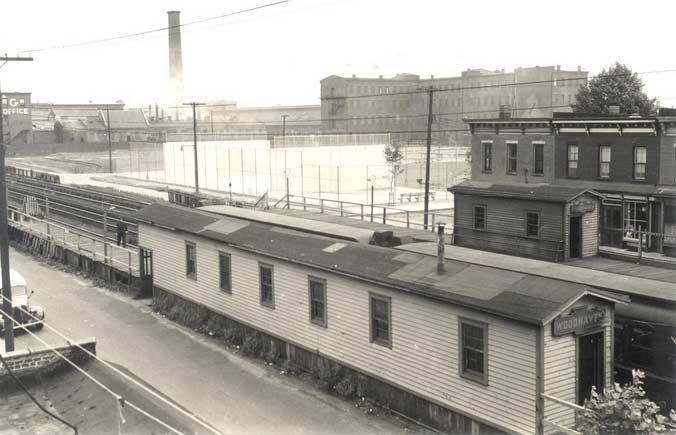 This photo from Art Huneke’s Arrts Arrchives shows the grade-level Woodhaven station, probably in the 1930s. 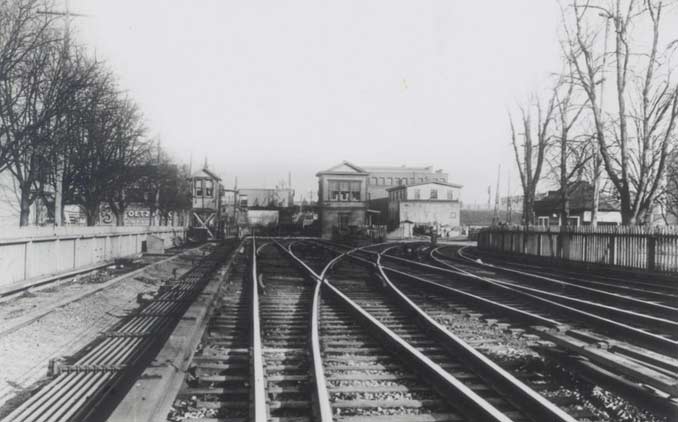 This photo from Arrts Arrchives shows a connection from the Atlantic Avenue LIRR tracks to the north-south Rockaway LIRR branch. 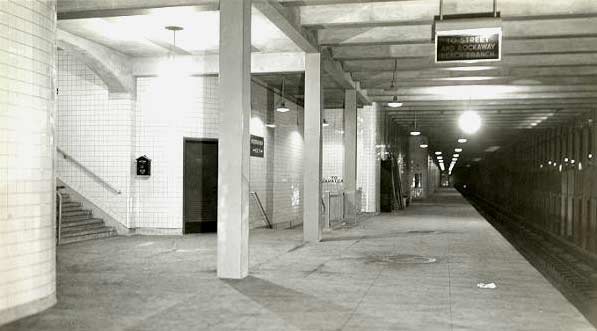 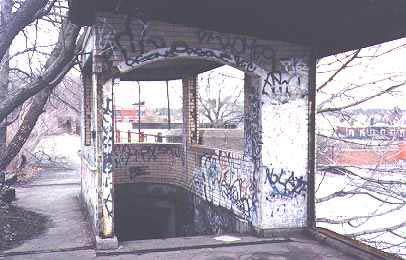 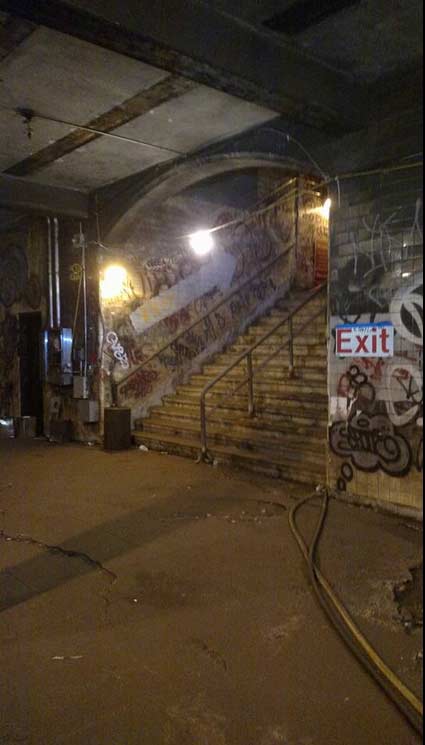 I’ve received an anonymous donation of recent photos taken at the underground Woodhaven LIRR station. Trains whistle past here at speeds of 60-80 MPH, and today riders are completely unaware of a closed station. 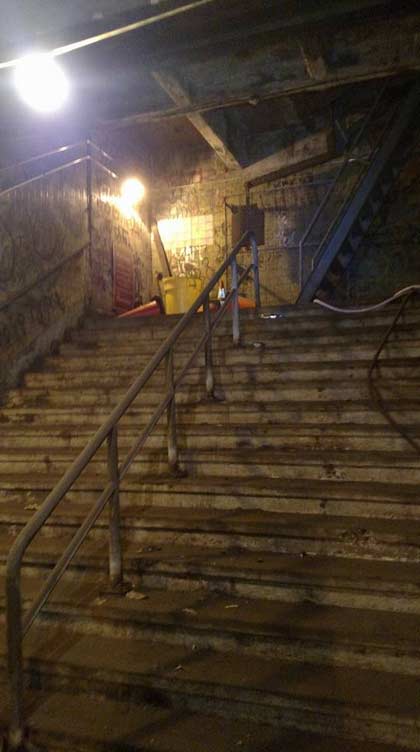 Original stairs, rails, and some original tilework is still in place. 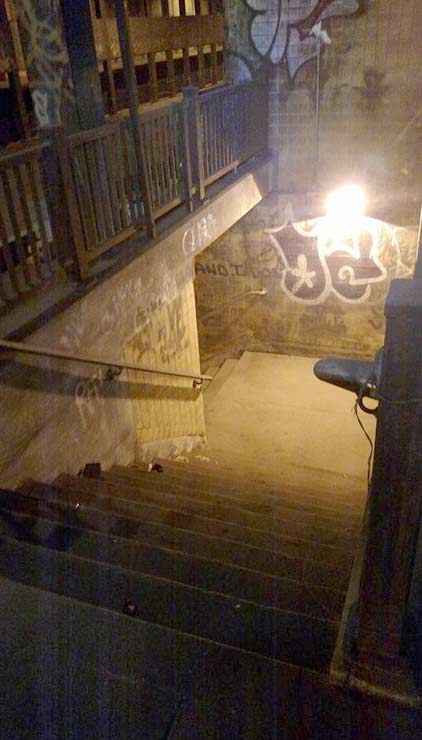 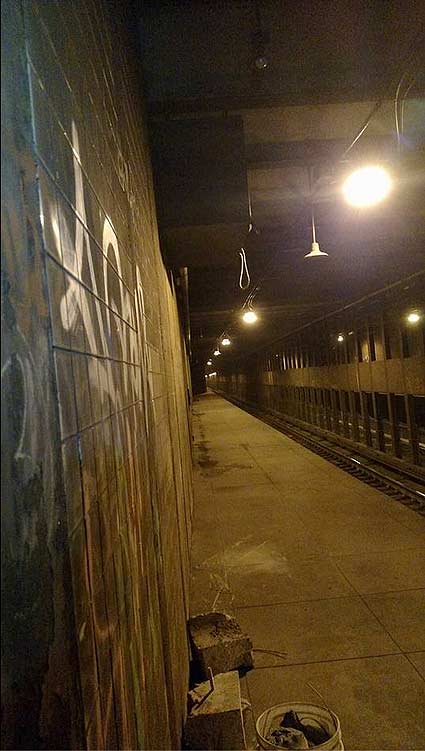 Along the Woodhaven station platform. 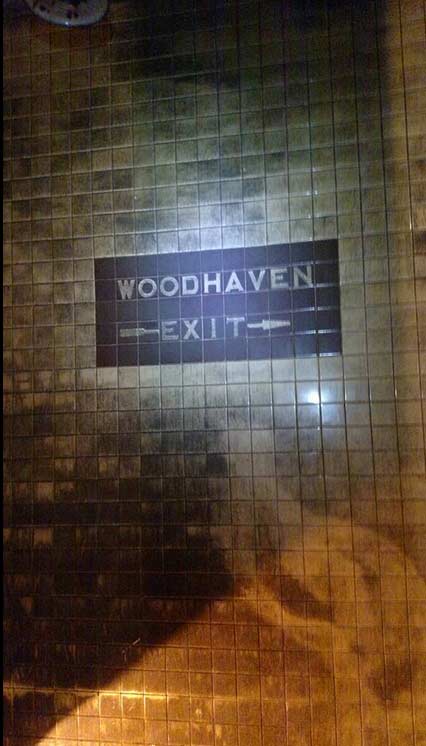 An interesting feature of the Woodhaven station is, as it was opened in 1942, it adhered to then-current designs, which meant that machine-Age IND-type signage and lettering was employed for station signage.

The East New York station at Van Sinderen Avenue was opened at the same time as the Woodhaven station and uses the same type of lettering, which appears in most IND subway stations that opened between 1933 and 1950.

It’s doubtful that Woodhaven, built to be a twin of sorts of the IND subway stations of the same era despite being a Long Island Rail Road station, will ever see passenger service again.

Are there any possible sources that can connect this station and the underpass of the East New York station to architect Squire Vickers, who was responsible for the same design not 10 years earlier on the IND subways? His work generally included a crossunder tunnel and the same font of inlaid directional tiles.

Vickers did design the look and feel of the IND stations.

Yes, and it’s well sourced and documented. Let me clarify. The question is if he designed these stations himself, with his hand, as well (stations which use almost exactly the same elements of his IND designs – directional tiles and crossunders), or if his designs were appropriated for this expansion whether he had input or not.

My inclination is to believe they used his designs that were on file and did these without him. The thick extra tile border around “WOODHAVEN” is uncommon, along with the directional sign, which he’s never “double lined” before. The “AND” that’s forced in is a little sloppy too.

Finally, brand new pictures of the abandoned Woodhaven LIRR station. Until now, the only pictures I’ve seen are the ones on Joe Brennan’s site and some youtube videos.

The Woodhaven Station, and the associated LIRR tunnel below Atlantic Avenue, were all part of a Robert Moses project to grade-separate the entire LIRR Rockaway Line in Queens and eliminate all street grade crossings. On the Rockaway peninsula, that mean raising the tracks onto the current viaduct that opened in 1941. The viaduct stations were deliberately built using rapid transit designs to expedite the conversion to subway operation and turnstile fare collection which occurred in 1956. Ironically, this was one Robert Moses project that benefited transit riders. Of course, private autos benefited from a much wider and faster Atlantic Avenue as well.

I had heard of a Woodhaven station, but this is the first time I’ve actually seen pictures of it.

This station should be reopened once they convert the Atlantic Terminal branch to “scoot
” service.

what is scoot service?

the original plan was for the IND to take over the atlantic branch from faltbush ave to Jamaica station.henceforth the ind type subway station at atlantic ave.

I like that idea….Brooklyn service was always treated as a step-child anyways. When they put air conditioned trains on the Penn Sta service, they ran older trains to Flatbush Ave in the 50’s and 60’s,

Interesting theory, Steve. Do you have any resources for further reading? It wouldn’t surprise me as takeover was the IND’s claim to fame. Though it confuses me a little why they’d want the Atlantic Avenue railroad when they were getting the Fulton St. subway just 2 blocks away.

not a theory,this is from the long island press circa 1937.the lirr wanted to abandon all train train service west of jamaica station and have the IND take it over.i,ve heard old time ind[t.a.] employee`s saying that the lirr was to come into the ind tracks around laffeyette ave thru a new tunnel.

Also, at the Roosevelt Avenue Station on the Queens Boulevard Line, the mezzanine level was a fully built station intended to be a terminal station that would have ran tracks to the Far Rockaway line. This was named the Winfield Spur and was part of the IND Second system. See Subway.org link: http://www.nycsubway.org/wiki/Station:_Roosevelt_Avenue_Terminal_Station_(Queens_Boulevard_Line)

I thought that too once, but looking at a few maps I realized it was actually supposed to go to closer to the Myrtle Avenue Line, and then run on an extension of that which was supposed to run on Central Avenue then make a sharp turn on 98th Street near Forest Park before heading towards the Rockaways.

It would’ve made more sense to have a direct route from Rego Park, and believe it or not, Robert Moses actually wanted to reuse the entire Rockaway Beach Branch for a subway line.

Guess that also explains the New York Subway signs at Nostrand Avenue station, rather than Long Island Rail Road ones.

I’d like to know how that anonymous person got into the station. As early as 1980, I’ve tried but could find absolutely no access. One former LIRR branch manager who of course could get in told me there was nothing to see there, but from these pictures I’d say there is. Thanks to that anonymous photographer for finally giving me a chance to see what’s down there. Even when the station was open, I unsuccessfully tried to stare out the window at what went speeding by and catch sight of something. The stairs leading up to the street and the outline of a WOODHAVEN tile sign on the wall were about it. I should have boarded one of the few trains that stopped there (until about 1976).

closest i got to that (boarding at a soon-to-be-closed city lirr station) was catching a train from union hall street to hempstead. but i do remember seeing the pocket schedules showing the few trains stopping at woodhaven.

Your handling of this topic was very helpful. Sadly, Art Huneke handling of this topic along with Rockaway Brach is horrible. He fails to provide a comprehensive explanation of the photos he supplies(which really defeats the purpose of showing the photos). As for your site, I was hoping to read about the tunnel at Woodhaven which connected Rockaway Beach trains access to Atlantic Ave /Flatbush Ave station. I was wondering if there is a photo of that tunnel/incline.

A friend of mine and I used to walk from our East New York neighborhood to Woodhaven blvd and hangout in the station, during the late 1960s, watching the trains speed by.
Usually on a Saturday when the station was always empty. We were about 12 y.o.and we were both fascinated with trains. They sped by the station at a very high rate of speed.

Here’s something I always wondered. Where exactly does the staircase lead to on Atlantic Ave? On the street level there’s only the old stairs on Atlantic Ave between 99 and 100 street that used to go from the street level up to the old Woodhaven Junction Station which is now closed off, but no where in the area is there any indication of a passage way to the underground station.

I question the 1942 date of the completed LIRR tunnel along Atlantic Avenue. I lived in Woodhaven on 88th Avenue between 80th Street and 85the Street. I was 2 in 1942. My cousin, who is 10 years my senior, used to take me up to 85th Street and Atlantic Avenue when I was 6 or 7 to watch the trains run on tracks on the Street. I can still remember the strong smell of the creosote as we stood adjacent to the tracks. I love that smell to this day. The late Ron Zeal told me they were temporary tracks, laid down while the tunnel was under construction. That would have been 1946 or 47 by my age at the time. I know I wasn’t 2 when my cousin rode me up there on his bike.

At least one of the tunnels from the Atlantic branch into/onto the Rockaway Beach branch/division (the first electrified passenger line in the world I believe, and the reason Cross Bay Blvd is not an interurban but a road), the eastbound onto the southbound is (or was) used to store buses, so that might be a way into the tunnel, but as to clearance between tracks and wall, that I don’t know…

Here is a rarely, if ever, mentioned fact I found in an old 1920s newspaper:

In 1885, Fr. Aloys Steffen purchased the Woodhaven Station of the Long Island Railroad and moved it to St. Elizabeth Church property at 87th Street and Atlantic …

Whether this structure is still extant I do not know.

I lived on 96th Street in 1945 when I was 4 – until 1953 or so.
I remember hearing the train as I went to sleep. My siblings say there was no LLRR there then and that it was the Jamaica Ave. “el”
They are wrong, aren’t they?