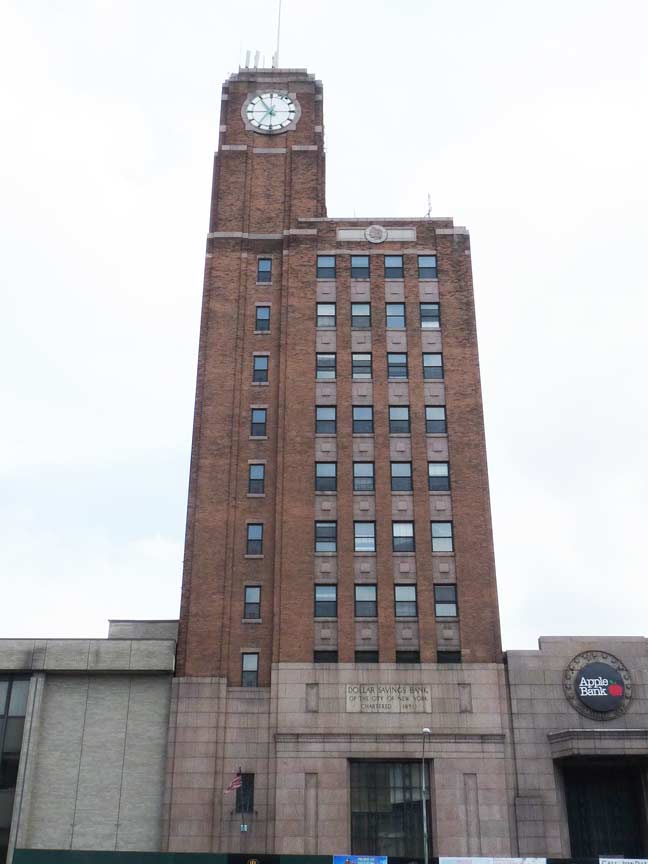 One of my favorites in Fordham is the Dollar Savings Bank tower on the east side of the Grand Concourse north of Fordham Road.  This Bronx landmark was built by Halsey, McCormack and Helmer, who also built Brooklyn’s answer to the Empire State Building, the Williamsburg Savings Bank, now known as One Hanson Place. Like that building, the Dollar (most recently an Apple Bank branch, but now has available space for lease) is best known for its towering four-faced clock. The building is really two buildings in one, constructed in two separate decades. 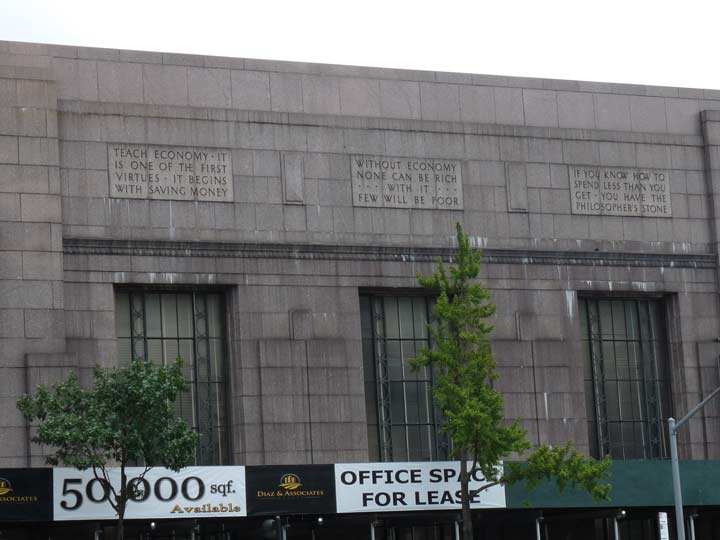 The Dollar, founded by paper box manufacturer Brian Hughes in 1890, was the first savings bank chartered in the Bronx. The Dollar Bank building was first built between 1932 and 1934 in the teeth of the Depression. On its exterior are chiseled some epigrams devoted to the importance of saving: “Teach economy: it is one of the first virtues – it begins with saving money”; “Without economy none can be rich; with it, few will be poor”; and “If you know how to spend less than you get, you have the philosopher’s stone, ” referring to a mysterious, unknown substance which alchemists believed to have the power to transmute base metals into gold. 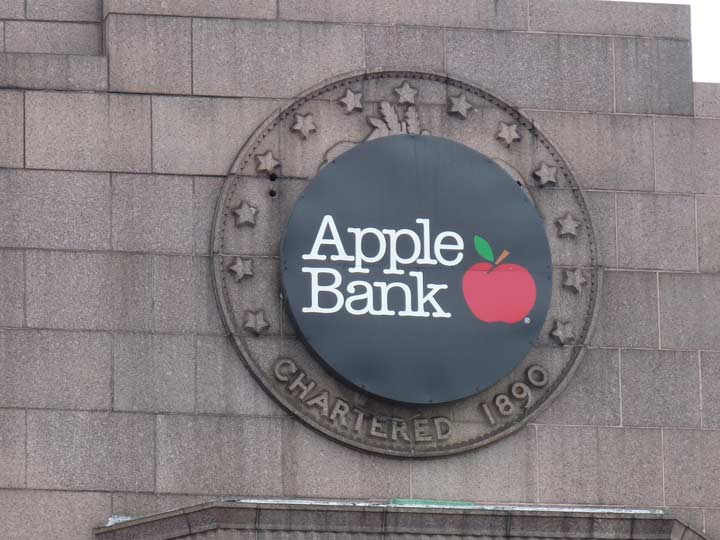 Two medallions featuring the profile of the allegorical female figure Liberty are on the exterior. The one on the original building has a bank logo affixed onto it, but an intact specimen can be seen at the roofline.

The clock was a later addition: its red-brick 10-story tower was constructed in 1950 to house the Dollar’s offices. The clock hasn’t worked for about 15 years.

Why did you call it the “Dime Bank Tower”?

That was an error.

Are you being sarcastic?
It looks awful

I was in there many times as a kid. It looked like the biggest bank in the world to a five year old!

It WAS a big bank, I think, and that granite interior! Do you recall brass fixtures? I was a toddler when we lived nearby in the 1950’s, but a trip to this bank, a pecan coffee ring from Schrafft’s, and a hop over to Alexander’s- was heaven.

I had the same experience as a kid only I preferred Sutter’s Bakery and their Napoleons..

There must have been dozens of State chartered Savings Banks in New York State…..I remember when they heavily advertised for opening accounts with as little as $5.00, by mail……..Money orders were either free or as little as a nickel up through the 60’s…Dollar Savings Bank was one of the biggest

In 1946 or 1947, when I was in the 6th or 7th Grade at St. Barnabas School in Woodlawn, we were strongly encouraged to open a savings account at the Dollar. I vaguely remember a Bank representative came to our classroom. Somehow, I extorted $ 10 from my Folks, and signed up. Several years later, when I was n High School, I found my passbook, took it to the Dollar at the Concourse and Fordham Road — in your photo — and closed out my account, for $10 plus some cents. I’ve long wondered how many of my old classmates’ forgotten savings lie fallow in this building’s vaults.

Can I get a list of employees that worked in the school savings dept. In 1956 to 1958. I worked there then. Would love to connect with friends on facebook if still living.

I would like to know if you have a old school savings bank book from Dollar saving bank. Is it still good? How can one find out?

I have the Manila envelopes the reps used to collect the money at schools. My dad was a rep for awhile.

Stew McMullan I worked there during my junior and senior hs. years and then again after graduate school. The Bank President was Robert J Zeller. If you look up the
definition of class in the dictionary I’m sure it be a picture of him. I worked with a girl name Doreen that made my time there enjoyable. The bank floor was awesome.

My father, William Buchsbaum, worked there in different capacities, but mainly as a Teller, from about 1947 until 1964,

My father, Warren Loeffler worked at the Dollar from 1945 and remained there for 47 years. He retired as a VP.