I did not include the 110th Street station at Central Park North, serving #2 and #3 trains, on my Original 28 subway survey of a few years ago — because while those Original 28 opened on October 27, 1904, this 110th Street station, along with most of the other #2 and #3 stations running up Lenox Avenue/Malcolm X Boulevard opened on November 13, 1904, just a couple of weeks later, as did the elevated portion of the line running up Westchester Avenue and Southern Boulevard as far north as West Farms Square at 177th Street.

Incidentally this station should not be confused with the other 110th Street station, which was named Cathedral Parkway when it opened in October 1904. The IRT likely named these two stations differently so that they wouldn’t be confused, since they are two avenues apart. 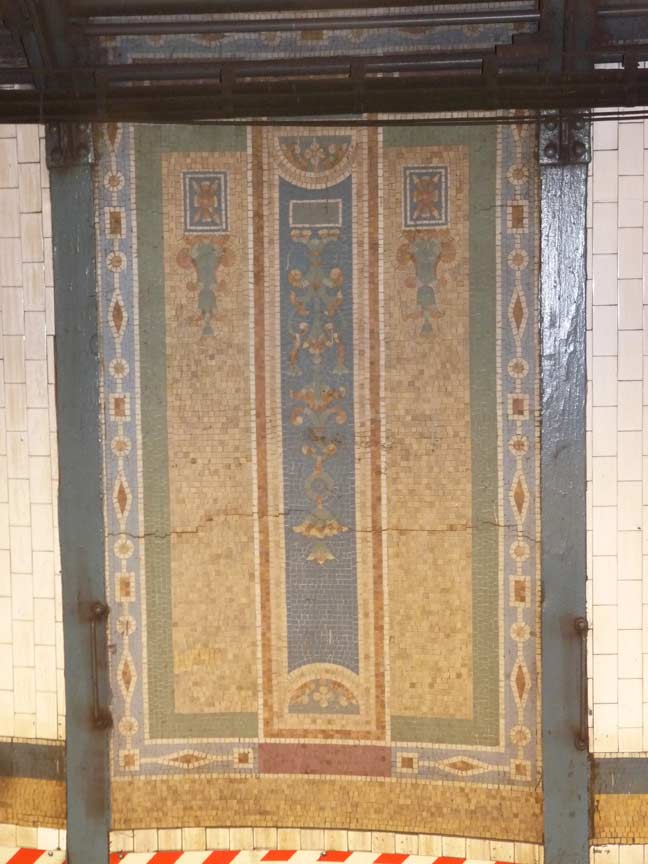 Since the station has an island platform, original subway station designers Heins & LaFarge had to come up with something different in subway decor for 110th Street as well as two other early subway stations at Bowling Green, way downtown, and 72nd Street, on the Upper West Side. The subway walls are concave, or slightly bent inward, and are covered with the same variety of shiny white tiling used on other stations.

At intervals, though, a “tapestry” of mosaic tiling in earth-tone colors like light brown and green are used to form a design, in this case what looks like a Persian rug, with a border of blue, ochre and brown tiles arranged in diamonds, squares and circles, as well as an intricate inner design:

“While the mosaic panels at 72nd Street relied chiefly on geometric patterns, these compositions resemble a strand of jeweled strings bordering an interior panel suspending a series of hanging bells and rings of jade. Any Buddhist monastery would be the envy of all Tibet — and not just by a tidbit, either — to display such a charming construction in its bell tower. It is to his credit that Grant LaFarge didn’t give all his ‘oriental rug’ stations the same pattern to wear…” — Philip Coppola, in Silver Connections, Volume 1, Book 2

Evidence that 110th Street was a little hastily opened rests with the panels being linked by mosaic bands toward the bottom on the uptown set, while the downtown set doesn’t have them.

The “tapestry panels” at Bowling Green, incidentally, were covered over when that station received a wholesale makeover in the early 1970s, when the then- Transit Authority was obsessed with burnt orange. 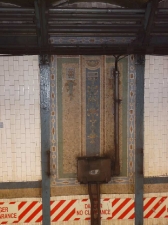 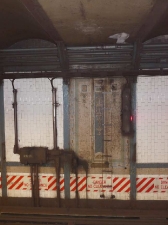 Unfortunately the Metropolitan Transit Authority doesn’t place a lot of value on the tapestries, since a number of them are obscured by electrical equipment and signals. One wonders if these could be moved off the tapestries and onto some of the blank panels. Compare what has been done with other stations, where ceramics and mosaics have been restored and even accentuated with strategic lighting. 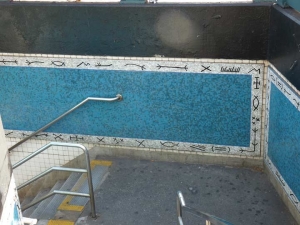 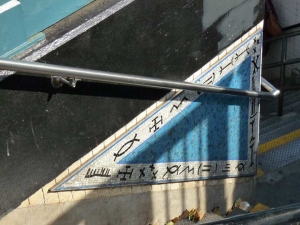 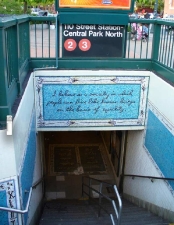 It’s appropriate that at the foot of Malcolm X Boulevard, subway artwork was installed honoring the civil rights leader assassinated in 1965. “Text from some of Malcolm X’s speeches in the fashion of Islamic [Kufic] writing is included, along with African and African-American ideograms symbolizing unity, love, word, speech, meeting and prowess.” nyc.gov

The two IRT stations were named differently because Cathedral Parkway refers to the stretch of West 110th Street west of 8th Avenue/Central Park West, in deference of course to the Cathedral of St. John the Divine. The street alongside the north side of Central Park was in 1904 simply called W. 110th St. About 50 years ago the subname Central Park North was added to that stretch.

Hello Kevin,
I remember seeing at least one of these tile tapestries at the Grand Central shuttle station, prior to the April 1964 fire. It was on the wall above the former southbound local track (the only track still connected to the East Side IRT).

I looked over nycsubway.org’s photo collection for the Grand central shuttle station and found no pictures of any pre-fire tileword at Grand Centerl shuttle station. The shuttle’s walls, like the other original IRT stations, were also concave and tiled with the shiny white tiles you mentioned.

I’m sure that in some photo archive, there must be other pictures of this IRT tapestry tilework, that may include the original one(s) at the GC shuttle station.