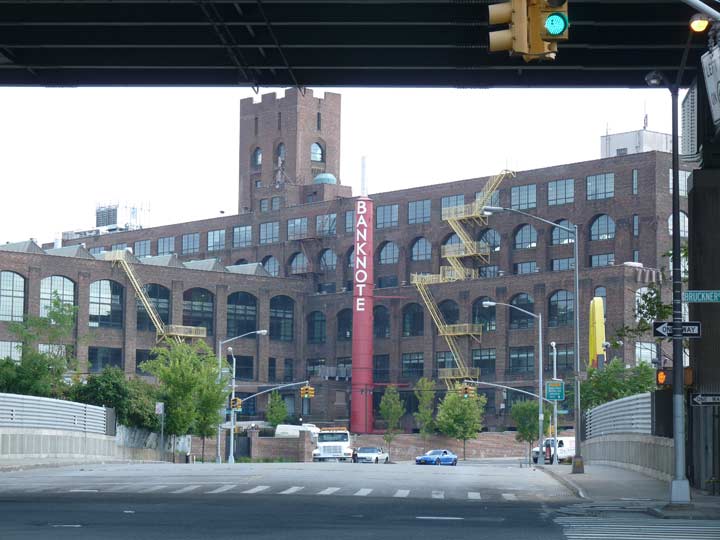 It looks like I’ll be spending some time in the Port Morris-Hunt’s Point areas in the Bronx, since a new pedestrian/bike bridge has opened spanning the Bronx Kill between the mainland and Randall’s Island. Until then, here’s a photo of the American Bank Note Building seen from Bruckner Boulevard and Tiffany Street.

From the ForgottenBook: This fortress-like building at Lafayette Avenue and Tiffany Street has produced Mexican, Brazilian, Costa Rican, Ecuadorian and Haitian stock certificates, travelers’ checks and stock certificates, as well as paper money. The company later to become American Bank Note was founded in the 1790s by engraver Joseph Perkins, a Massachusetts native from Newburyport; the company was incorporated in 1858. American Bank Note did produce US currency from 1858 to 1879, and for a short time in 1861 produced Confederate money. The company also entered into printing stock and bond certificates in association with the New York Stock Exchange in the later 19th Century. Its Bronx factory was built in 1911 and it was designated as a NYC Landmark in 2008.

Later, the American Bank Note Building was home to artists’ studios and Wildcat High School, established for troubled students by the Wildcat Service Organization. Developed in 1972 by Mayor John Lindsay as a “program of last resort” for the chronically unemployed, the organization provides job skills and training for the economically disadvantaged. It is also being refurbished and new apartments and new retail constructed.

By 2012 it had gone the luxury condo route, as The Banknote.

For many years the ABNC employed an engraver named Joseph Ford, who was a legal counterfeiter! He duplicated various currencies produced here; his successes in counterfeiting banknotes prompted changes in their manufacture. His son, William, became the world’s most successful portrait engraver (the type that appear in the Wall Street Journal).

Nice that it’s not being destroyed.
Would be better if it had some use other than part of the endless stream of “luxury condos”.

The American Bank Note Company also produced postage stamps for many of the above-mentioned nations.