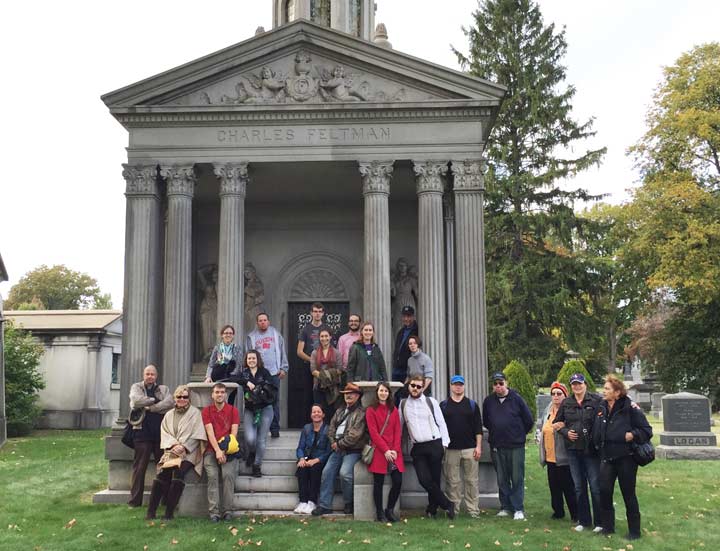 Above, fans gather at Charles Feltman’s tomb. Feltman, the purported inventor of the hot dog (it was originally a sausage served on a roll; the roll’s distinctive shape and the hot dog’s mild recipe evolved later on) operated a food wagon in Coney Island beginning in 1867, and by 1874 the profits from his hot dogs enabled him to build his Feltman’s Ocean Pavilion. By 1946, when the restaurant finally closed, billions of frankfurters (also called since the sausage on roll treat had also arisen in Frankfurt, Germany as early as the 1500s) had been sold.

This, one of the more elaborate tombs in the Cemetery, must have cost a lot of frankfurters. 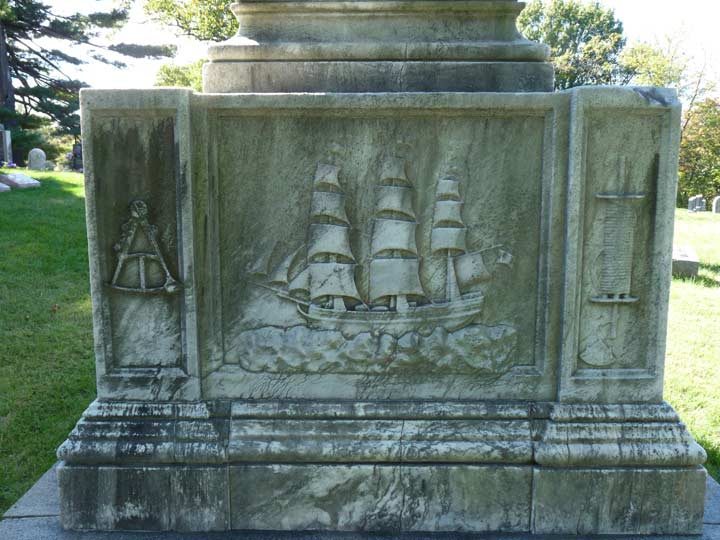 This large marble monument shaft honors shipping magnate Memnon Sanford with a clipper ship on the base, capstan, ropes and a figure of Neptune at the apex. Neptune is accompanied by a horse with webbed feet and a tail; Neptune, in the myths, is said to have created horses. 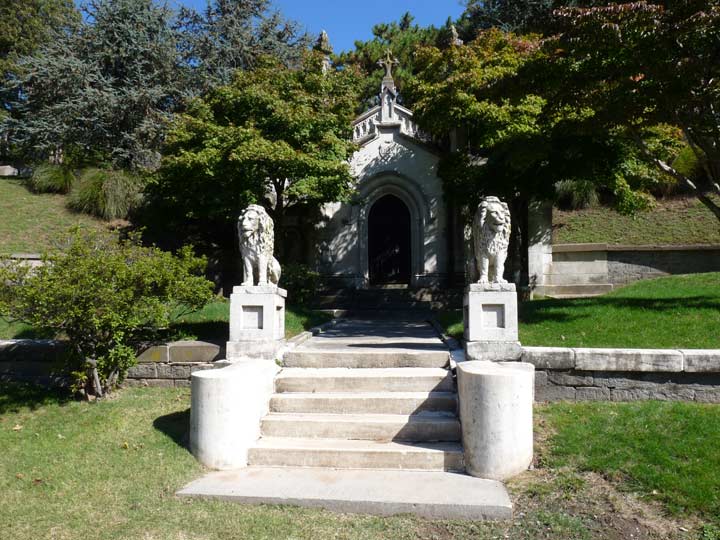 William Niblo (1789-1875) gained fame as the proprietor of Niblo’s Gardens, a theatre at Broadway and Prince Street from 1823 until the Civil War years. Featured over the years were Shakespearian actors Edwin Forrest and Charles Kean, as well as attractions like an acrobatic troupe as well as drama and early vaudeville presentations.

Niblo is entombed by Crescent Water in a cemetery spot where he liked to picnic with friends. He stocked Crescent Water, as well as other Green-Wood ponds, with goldfish.

Keep up the great work, I hope to be at a tour one of these days.

When will your next tour of Greenwood be.

My great great grandparents are buried at Green-Wood. Your tour sounds great. I hope to visit one day!

So many of us who now reside in the suburbs of NYC can discover our family lineage lies in Greenwood Cemetery. Few people realize that Manhattan Island was the original pinnacle for a growing New York. Expansion into Brooklyn led to many of our ancestors being laid to rest at Greenwood and many other “local” cemeteries. My Genealogy research discovered quite a few folks from my past interred at Greenwood.