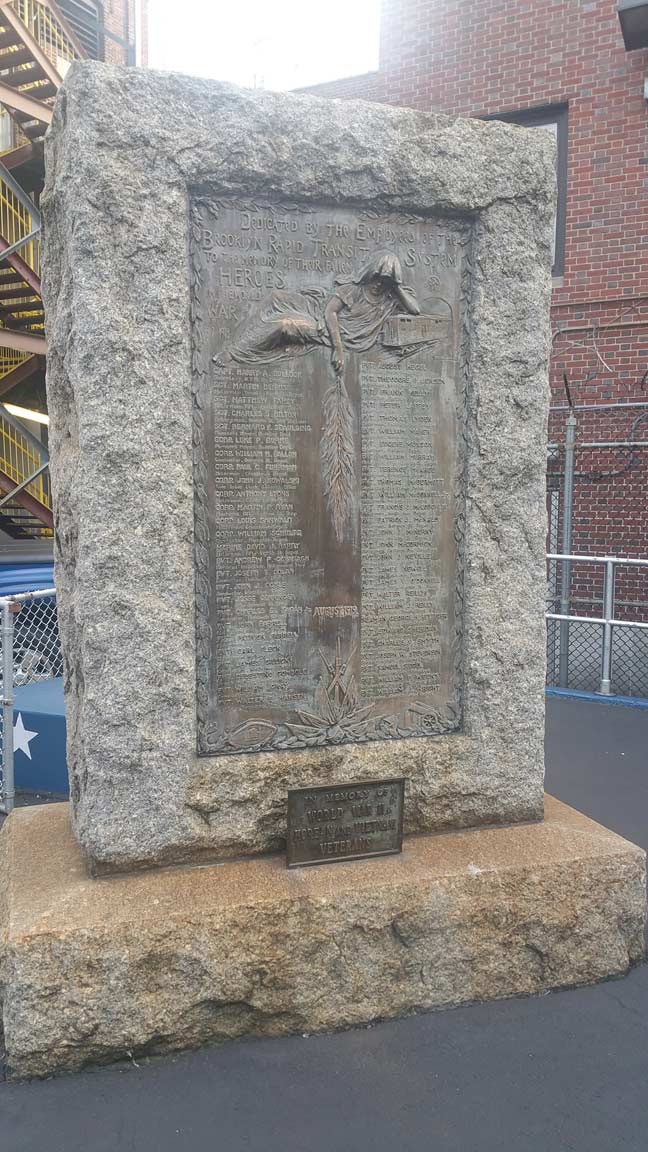 The Brooklyn City Railroad was first incorporated as a horsecar line in 1853. Later, trolley lines drawn on street rails by overhead electric wires replaced the dobbins and the BCRR became the largest company operating streetcars in Brooklyn, with lines fanning out to the far reaches of Brooklyn such as East New York and Bushwick, and further into western Queens in Ridgewood, Maspeth and Corona. Cemeteries were common destinations, with lines going to Cypress Hills, Green-Wood, Calvary and Holy Cross Cemeteries.

After the BCRR was acquired by Long Island Traction in 1883, it reorganized into Brooklyn Rapid Transit in 1895, the precursor to Brooklyn-Manhattan Transit. Under the Brooklyn Rapid Transit operations, great changes came to NYC transit lines, a surface steam railroads such as the Sea Beach line, the West End Line, the Brighton Line and the Culver Line were all converted to electric-powered trains with third rail and were elevated or placed into open cut trenches to avoid intersecting with roadways in the dawn of the Age of Automobiles. Older subway hands still use the old steam railroad names instead of modern-day letter designations (which seem to be reshuffled every 15-20 years).

Brooklyn Rapid Transit ran into financial trouble after the Malbone Street Wreck on November 1, 1918, when an inexperienced motorman was running a Coney Island-bound unit during a strike, and rounded an S-curve too quickly, crashing the train and killing and injuring dozens. The BRT was reorganized again into the BMT, which ran subways, trolleys and elevated lines, in 1919 and lasted till most transit lines were unified under the NYC aegis in 1940, while trolleys were gradually phased out from 1940 to 1956.

Secreted behind a seemingly impenetrable metal fence in an alcove at Broadway and Jamaica Avenues at the East New York subway and bus yards is a fleeting final remnant of Brooklyn Rapid Transit operations, and also one of the handsomest, detailed war monuments you’ll ever see. FNY Correspondent Gary Fonville, an MTA employee, has access to the ENY Yards and snapped the photos seen here.

At the top of the monument, in the florid yet sanserif script employed on decorative manuscripts and signage in the early 20th Century (cf. the lettering used on some entrances of the Metro in Paris) is inscribed “Dedicated by the employees of the Brooklyn Rapid Transit System to the memory of their fallen heroes in the World War, 1917-1918.” The names of BRT employees, most of them privates, killed in action are listed below. 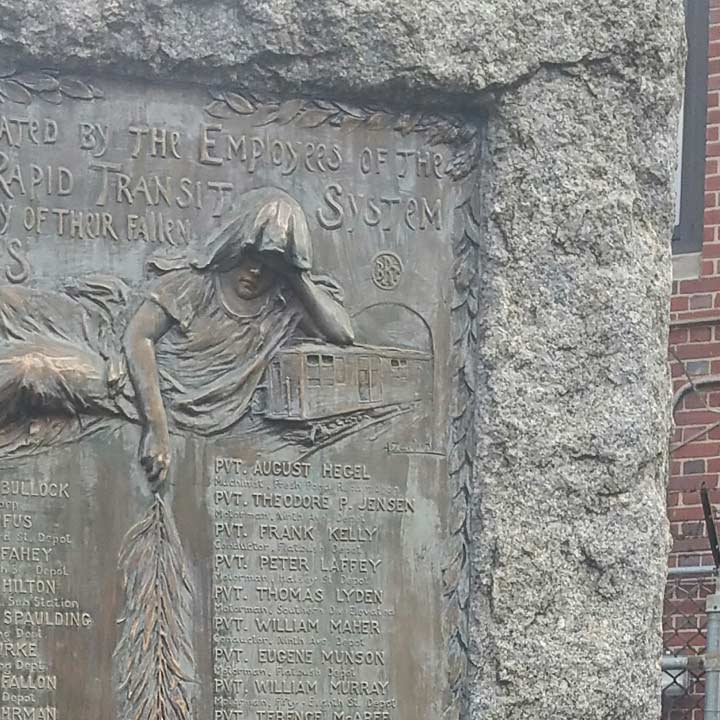 Best of all, though, the detailed bronze workmanship displays a mourning, veiled woman, holding a peace offering, reclining on a BRT car in a model common in 1918, emerging from a tunnel. Perhaps one of the transit buffs reading this can note in Comments what the exact model is.

Lastly, the old circular BRT logo is displayed above the traincar.

More BRT images. Each photo links to a story.

Some of the retired trolley cars were remodeled into cabins for the Sanita Hills Camp in Holmes, NY which was used for recreation by NYC Sanitation workers and their families. It was later sold to the Boy Scouts. I fondly remember many weekend camping trips there. For a kid from Brooklyn it couldn’t get any better!

And for a kid from the Bronx as well. Troop 92 had many winter outings there because the cabins were heated & featured full kitchens. I too have many fond memories of Sanita Hills.

The subway car is called both an A/B or Standard Steel. Scroll part-way down this page: http://nycsubway.org/wiki/The_BMT_Fleet_(Elevated,_Subway,_Experimental)

In the movie “Sgt. York” York has a colorfull buddy in his unit named “Pusher” Ross who was a NY subway employee before the war. He is later killed in action. Was this based on a real person ? I was not able to find any info. Anyone know ?

Any idea who did the bronze work? The art? Any names?

No idea, and I doubt anyone does anymore…

Notice how the “War to End All Wars” has a massive list of the honored dead.

The wars that followed “The Great War” only rated a tiny little plaque, with no names.

And there’s no new plaque for Iraq, Afghanistan, or the various wars of peacekeeping since then.

It’s very sad, in a way…it says something about killing and warfare becoming increasingly ordinary and less horrifying…

My uncle, Charles Beacroft Attlesey, dedicated this monument in 1919. See article for a great historic read!