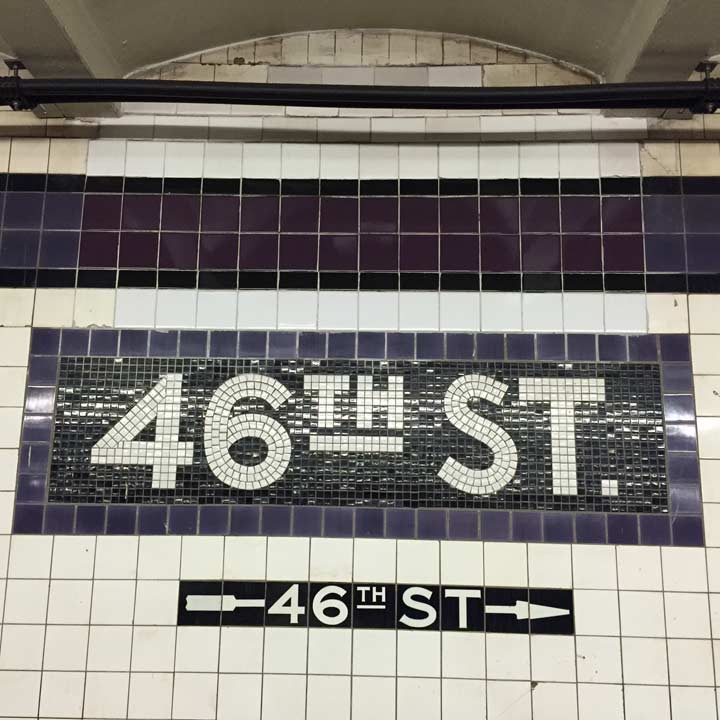 We’re fortunate to have a subway system old enough to have several different design schemes imprinted on it. The Earth is about five billion years old, old enough so that critters from several paleontological ages are still running or swimming around, like jellyfish, honey bears, Galapagos turtles and Vince McMahon. Similarly, when the subway first appeared in 1904, Beaux-Arts and its exquisitely crafted and ornamented architecture was current. A few years later, a more humble “Arts and Crafts” regime took over, with its mosaics and tiles. The regimented Machine Age followed, and most subway stations built in the 1930s and 40s looked the same, except for the colors. After that the streamlined International Style took over, a subway stations built during that time were all burnt orange, brushed steel and Helvetica.

I’m putting in a good word here for the Machine Age style used for most stations in the Independent Subway built between 1925 and 1950. The nameplates are big and bold and the colors eschew pastels and subtlety, announcing themselves like a rush hour express. It isn’t mentioned much in the subway books but I also like the directional signs in black and white, in a font resembling Copperplate but not quite. These are stations of their time and it’s miraculous that most of them remain as they were built, some of them now over 80 years old.

The tiles that had letters and numbers printed on them, had about six or seven variations:
– The first known was previewed on the BMT’s Fulton Street and Broad Street stations of the Nassau Street loop, and the 8th Avenue terminus of the 14th Street / Canarsie line, all opened in 1931 (and its tiling since reworked); this would be used on the original 8th Avenue subway from 207th to 116th Street stations, and then again from West 4th Street to what was originally tiled on the sidewalls as “H AND M” (not, of course, the clothing store chain – though you could use that layout to direct people there); the Concourse line from 205th to 174th-175th Streets; the 7th Avenue and portions of the 5th Avenue station in Manhattan, then in Queens the 23rd Street-Ely Avenue station (opened 1939, the last new station to bear this type variation), then the Queens Boulevard stations from Queens Plaza to 46th Street (the last-named as seen above), Elmhurst Avenue and Grand Avenue – Newtown, then finally 75th Avenue through Van Wyck Boulevard (now Briawood – Van Wyck); all stations on the Houston-Essex route from Broadway-Lafayette to York Street; the Jay Street / Borough Hall (now -Metrotech) station; all underground stations on the Smith Street to Church Avenue route; the Brooklyn-Queens crosstown from Court Square to Nassau Avenue, and again from Flushing Avenue to Fulton Street; and the Fulton Street line itself, from Hoyt-Schermerhorn to Kingston-Throop Avenue; it should be noted the ‘5’ used on 5th Avenue / 53rd Street, 36th Street in Queens (pointing to 35th Street exit), and 15th Street – Prospect Park in Brooklyn, was different from that on all others with ‘5’ within either the station name or exit designation; to say nothing of the four-part arrows at Spring Street differing from any other stations with this type variant
– Embossed tiles, used on the 8th Avenue line from 110th Street – Cathedral Parkway to 14th Street (with 14th, 34th, 42nd and 59th Streets all since rebuilt); part of the 205th Street terminus of the Concourse line; and a part of the Queens Plaza station (since rebuilt)
– Unless these are three separate variants, the Broadway-Nassau (now Fulton Street) and High Street / Brooklyn Bridge stations along the Cranberry Street tubes; the Northern Boulevard, 65th Street and Roosevelt Avenue stations of the Queens Boulevard line; and the Concourse line from 170th Street to 155th Street – 8th Avenue; don’t know if the Broadway (with the infamous “Brodaway” spelling along the way) and Metropolitan Avenue – Grand Street stations of the Brooklyn/Queens crosstown would be of this group or the one to be described after the next set
– Three of the Fulton Street line stations from Utica Avenue to Rockaway Avenue; and Queens Boulevard stations from 71st – Continental Avenues to Woodhaven Boulevard – Slattery Plaza
– The five stations of the Sixth Avenue line (from 14th to 47th – 50th Streets) and the Sutphin Boulevard, Parsons Boulevard and 169th Street stations of the Queens line; this variant is the one that was used for tiling on extensions from circa 1948 of original 1904 IRT station platforms between 181st and 137th Streets, 116th and 103rd Streets, and 33rd and 23rd Streets; plus southbound platforms from Astor Place to the closed Worth Street station, probably some Brooklyn stations too such as Hoyt Street
– The Broadway – East New York (now Broadway Junction) station of the Fulton Street line, opened 1946; several sections of some Queens and Concourse stations were retiled with this variant when the original tiles fell off or whatever
If you check all the stations recommended, notice subtle differences in the shapes of such letters as ‘S’ and ‘K’, to say nothing of the numbers, positioning of arrows, etc.