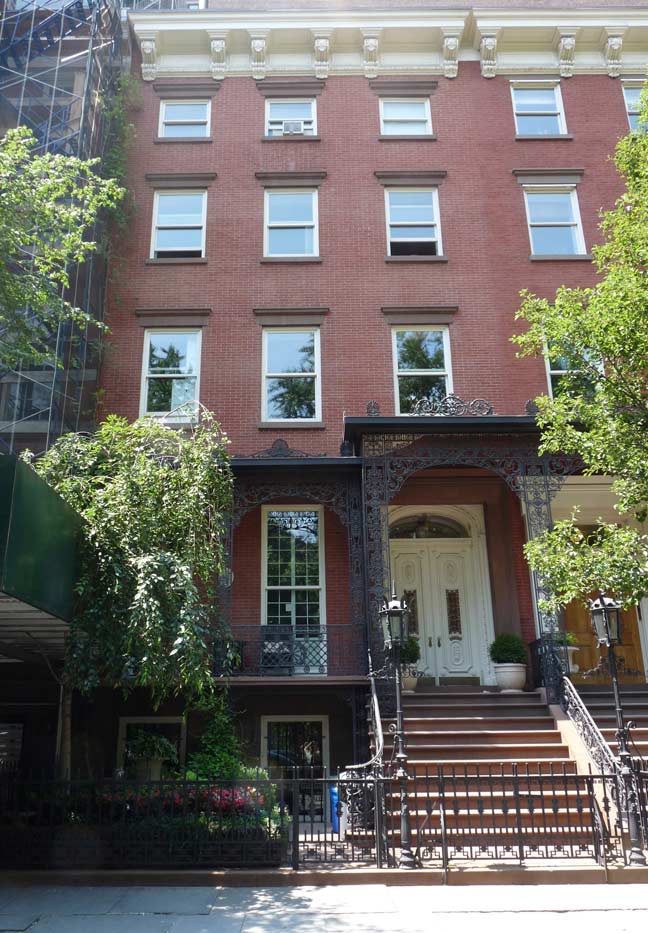 #4 Gramercy Park West is a pleasant 4-story brick mansion with a porch framed by intricate metalwork (that it shares with the adjoining #3 GPW) that has an indirect connection to me, despite my utter inability to afford such a place. It also has two prominent lamps flanking its entrance, which help identify what it used to be: a former mayoral residence. It was a colonial Dutch tradition to display two lit lanterns outside the burgomaster’s residence, as a sign he was home and should not be disturbed. The building was converted to separate apartments in 1953. Tom Miller, in Daytonian in Manhattan, has other tidbits about the twin buildings.

Between 1847 and his death in 1869, #4 was the home of James Harper (1795-1869), publisher and, for one year (1844-45) Mayor of New York; terms were shorter then. Originally a printer by trade, James Harper with his brother James founded the publishing house of J & J Harper in 1817, which became Harper & Sons in 1825, Harper & Row in 1962 and in 1991, HarperCollins after merging with a British publisher. Harper has published works by Mark Twain, Agatha Christie, J.R.R. Tolkien, and me: the ForgottenBook came out on the temporary Collins imprint in 2006.

As mayor, Harper founded the city’s first municipal police force, which was also the first to outfit the corps in blue uniforms; and began work on a municipal sanitation system and banned free-roaming pigs from NYC streets.  Harper returned to the company he co-founded after a re-election defeat. Like many avenues in the northeast Bronx named for NYC Mayors, Harper Avenue bears his name.

As far as other mayoral residences marked with entrance lamps, I can only think of one  other surviving example at #6 St. Luke’s Place in Greenwich Village.

Kevin: Thank You! for another year of fabulous memories….

I think I speak for all of us who follow your postings: I never cease to be amazed at the depth of your research, your keen eye for things I would never notice, and your ability to educate and entertain us at the same time.

I wish you and your family a VERY HAPPY, HEALTHY, AND PROSPEROUS NEW YEAR!

Thanks for another terrific FNY year! Best wishes and blessings for a great 2016.

I thought the purpose of the mayoral lanterns were to signify that the mayor was in and you COULD call on him for business. Kind of like the old White House when you could just drop in and bother the President. So maybe the lamps were more “invitation” rather than “do not disturb.”

Happy New Year! Methinks ye were celebrating when posting “James Harper with his brother James founded the publishing house…” To a grand 16!

HAPPY NEW YEAR!!!! And thank you for running this website that fascinates this fourth-generation New York native.

So Mayor Harper banned free-roaming pigs? Would that we could do so again today…