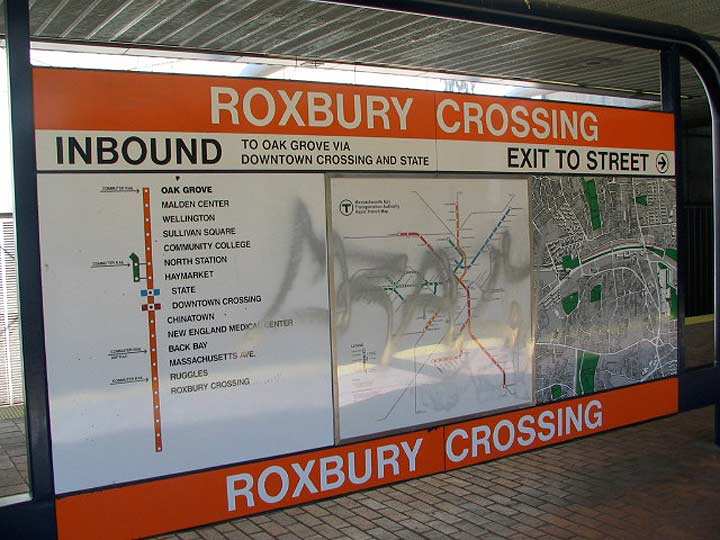 I’ve always preferred Boston’s “T” route maps to the MTA’s in New York (though apparently the locals disagree with my assessment). One one large surface, you have a line map, a system map, and a local street map. With some exceptions, you have to look in several different walls or surfaces for these maps in New York subway stations, and NYC doesn’t bother with line maps at all — likely because several lines can operate on one set of track. Boston’s subway predated New York’s, and on some lines, subway and light rail service is combined. At Park Street and other downtown stations, you can actually cross the tracks on Green Line stations as the light rail trains using the underground stations take power from overhead lines. This was a revelation when I first saw them in 1983!

Another bit of decor that Boston is able to do that New York cannot is assign an individual color to different subway lines. In New York, trunk lines carry colors based on what north-south avenue or street they travel under, but in the other boroughs different lines run on different sets of track on different roads; for example, the 2 (red) and 5 (green) share tracks in the Bronx.

In both cities, Helvetica is the font of choice.

MEMORIAL OF THE “FOUR HUNDRED”

Regarding the colors in Boston, though on a smaller scale compared to NYC, the Green Line has four branches and the Red line has two branches. One of the Red Line terminals actually gives you a cross the platform transfer to a trolley (Mattapan-Ashmont).

Boston’s system is much smaller than NYC’s. The three heavy rail subway routes (Red, Orange, Blue) are simple point to point routes with no express services. Only the Red has a service variation – after JFK/UMass trains alternate between two south terminals, Braintree and Ashmont. The Green Line has four branches that all merge into a downtown trunk that continues to Lechmere. So a simple system only requires a simple map.

Another transit system using color for its routes is Chicago. Even the destination signs are background colored for it’s named route.

The T since color coding of the trunk lines in the 60s has been in the habit of bolting on new maps on top of old ones. The Red Line and Orange Line have maps that date back to the 60s in some stations with at least one if not two bolted on top of the original.

The T has a nasty habit of leaving old, out of date maps up for decades. Take the neighborhood map in the picture for instance, the vast majority of them are decades out of date to the point of being a hindrance to passengers than a help.