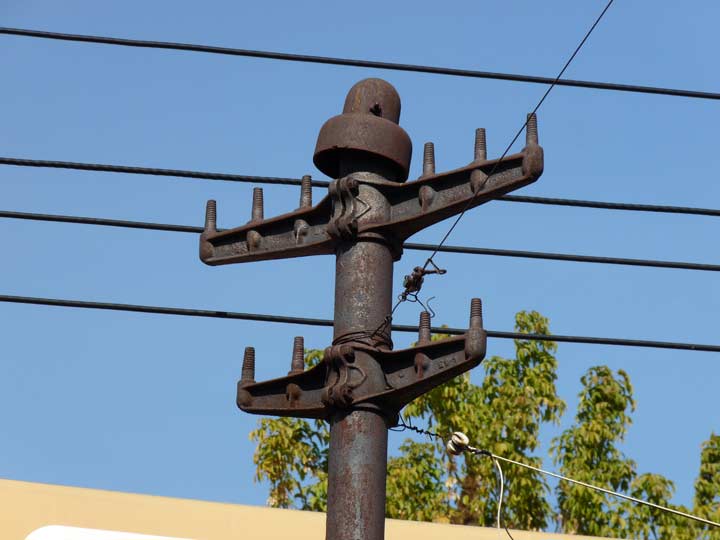 This massive, rusty pole with a pair of crossbars at the top has been in place on Glenwood Road near Rockaway Parkway for almost a hundred years, and pure inertia keeps it there. I suppose one of these years the city will get around to removing the remaining cluster of poles that supported trolley wires at the terminal  of the Canarsie Line subway, as the city has done in just about every other place the poles were except for Surf Avenue in Coney Island, but you never know when that day will come and so I keep making pilgrimages down here to see them. Trolleys haven’t run on Rockaway Parkway since 1951, but this pole didn’t support wires on that line.

Instead, the brackets are at an angle facing away from Glenwood Road. That’s because they faced a trolley right of way that was an extension of the Canarsie Line that ran through back yards parallel to East 96th Street and ran all the way down to the Jamaica Bay waterfront, where, in the early years of the 20th Century, there was an amusement park. That trolley line hasn’t run since 1942, when much of Canarsie was still rural.

But every time I pass this pole on Glenwood Road, and notice the strange angle, I’m mindful of that trolley line I never saw and what Canarsie used to look like, and that’s why the webmaster keeps Forgotten New York going, now close to 17 years as of late 2015.

Much more upcoming in Canarsie, since I did an extensive walk in its southern reaches in October 2015, looking for old farm lanes.

Some other existing trolley poles(haven’t passed them for many years, still show on google view)-
1-On Liberty Avenue,between Pennsylvania and Sheffield Avenues.
2-Corner of Tillary and Cadman Plaza West.
3-On Queens Blvd. between Van Dam Street and Skillman Avenue.

All trolley poles are under New York City Transit jurisdiction.

At the station, you can imagine from the last station where the Canarsie line continued past Rockaway Parkway at grade level.

When I was a kid, once my dad walked me through the park next to the Canarsie Pier and showed me where rides of Golden City were. Apparently, the park’s paths were from the old amusement park.

How did such a weird-looking thing work, anyway? Just wondering….

There were glass or porcelain insulators on top of each of the pegs. Wires were attached to the insulators. These were not the trolley contact wire, they were most likely used for trolley wire feeders, signals or communications.

And the reason the crossarms (not crossbars) are made of steel is that the 600-volt DC feeder cables were HEAVY – in some cases, well beyond what wood can handle.

In some cases, the sheer weight of the cables was sufficient to keep them in place on the insulators without the need for the second ‘tie wire’ normally wrapped around the insulator’s top to bind the wire in place. However, since these cables were prone to expansion when the system was running at maximum capacity, some trolley feeder insulators have nuts and keepers to screw down on top of the cable or have metal fingers that are bent over the wire instead.

Then, at certain points along the line, a wire would then run from these feeders to a insulated messenger cable, and in turn to the actual overhead contact wire.

Most of these insulators would often be made of various composite materials (glass is typically too fragile for this application and porcelain was often considered overkill). The trolley systems in San Francisco actually made use of insulators crafted of wood (Lignum Vitae)!

There used to be a pole like this on Nostrand Ave. just off of Flatbush Ave. (The Junction)

Is it still there ?

The Wilson Ave trolley used to end at Rockaway and Hegeman Aves at the then car barn,,When buses came on, that line was extended to the end of the Canarsie Subway line.

I don’t remember a car barn but an open area of at least an acre. I also remember it being down in a ditch, probably the original grade of the street. I remember trolleys climbing a hill to get out.

There’s still a trolley pole at the bus turnaround at Richmond Ave and Hylan Blvd on Staten Island. The turnaround area for some S59 buses was once a trolley terminal, and the pole has been there since at least the mid-1930s. Staten Island (sadly) was the first borough to discontinue trolley service and switch to diesel buses in the latter part of the 1930s.

That was not a trolley terminal. The Richmond Avenue trolley terminated up near Victory Blvd. Those poles are Brooklyn trolley poles but they were installed only to hold the overhead lights for the bus loop area. Apparently they were surplus items that the TA put to use in the 1950s.

My father rode that trolley line a few times…we went out there to see it. The route still has the poles.