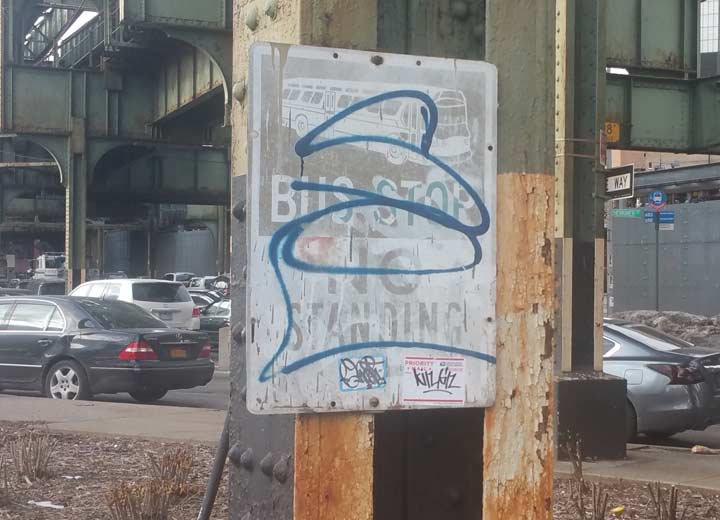 You never know what strange creatures will show up under elevated trains. Here on a pillar supporting the BMT Broadway Brooklyn line (J train) on East New York Avenue at Broadway is a 1960s-era bus stop sign, depicting a General Motors “fishbowl” bus with its, for the time, ge-normous glass window in front. The Fishbowls were phased out of the MTA bus fleet in the 1980s, but several municipalities and private bus companies still use models of varying age.

It also gives you a good idea what sun bleaching will do. Some street signs look like this!

There is still a bus stop here for the B12 but it’s further up the block at East New York Avenue and Fulton Street.

Actually there were some Fishbowl buses which lasted till 1995. These were late 60s/early 70s models that underwent a total rebuild at a third party vendor and soldiered along till the mid 90s. One is preserved in the Vintage Fleet.

There used to be a similar sign on Austin Street near the Kew Gardens LIRR station. It was when I was younger and when I didn’t have my own camera. I hope someone at some point took a picture of it as it isn’t there now. It was there around 2007-2008 maybe at the latest.

“It also gives you a good idea what sun bleaching will do.”
Tell me about it! When I was training at Coney Island Hospital in the mid-90’s, I had to park on the side streets in the early morning. I’d come back in the evening to find a ticket on the car. The signs were so sun bleached that you had to live there to know what the alternate side of the street parking rules were.

Suggestion for the MTA. Start using graffiti paint for your signs. Judging by the photo it seems to remain vibrant longer.

I remember when the ‘fishbowls” came in in Manhattan about ’63.
Oh boy,I remember thinking.Now theres more room for passengers.
Wrong.