A COUPLE OF KEAP-ERS, Williamsburg

Many of the streets in Williamsburg and northern Bedford-Stuyvesant are named for signers of the Declaration of Independence. Not every signer is represented, but most are. Ben Franklin, George Clymer, George Taylor, James Wilson, John Morton, and George Ross of Pennsylvania; Caesar Rodney of Delaware; William Hooper, George Hewes and John Penn of North Carolina; Edward Rutledge, Thomas Heyward Jr., Thomas Lynch Jr., and Arthur Middleton of South Carolina; George Walton of Georgia; Elbridge Gerry of Massachusetts; Josiah Bartlett, Matthew Thornton and William Whipple of New Hampshire; Stephen Hopkins and William Ellery of Rhode Island; Richard Stockton and John Hart of New Jersey; George Wythe, Richard Henry Lee (or Francis Lightfoot Lee), and Benjamin Harrison of Virginia… all have named streets in Williamsburg or Bedford-Stuyvesant named for them. John Adams, John Hancock, Francis Lewis, Thomas Jefferson, and Charles Carroll have named streets in other Brooklyn neighborhoods.

Some are missing: Rush Street (Benjamin Rush of Pennsylvania) was lost to urban renewal in the 1970s…Gwinnett Street (Button Gwinnett of Georgia) was absorbed by Lorimer Street in the 1800s; and then there’s McKean Street, named for Thomas McKean of Pennsylvania…

Of course, there never was a McKean Street.  The street is actually named Keap Street; a long-ago administrator or mapmaker mistook a handwritten transcription as being “Thomas M. Keap”, and not being a student of history (to be fair, can you name more than five signers of the Declaration?) misnamed the street, which has never been renamed. 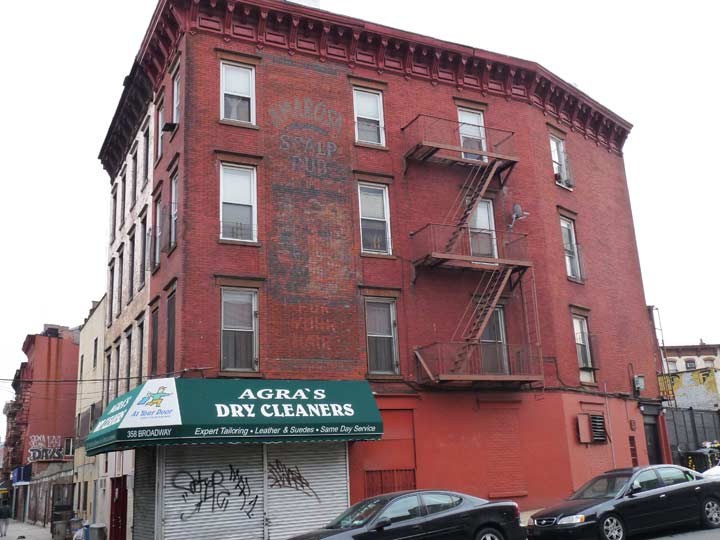 A pair of anomalies can be observed on Broadway where it intersects Keap Street. Here’s a (very) faded ad for Amarosa Scalp Rub; most of it is obliterated except for the “For Your Hair” tag at the bottom. The name makes me think of Omarosa, the queen bee contestant on Donald Trump’s The Apprentice.

Almost completely faded near the roofline is listed the advertising firm Disoway & Fisher. The firm was headed by an Arthur Berger but that’s the extent of my knowledge about the company. 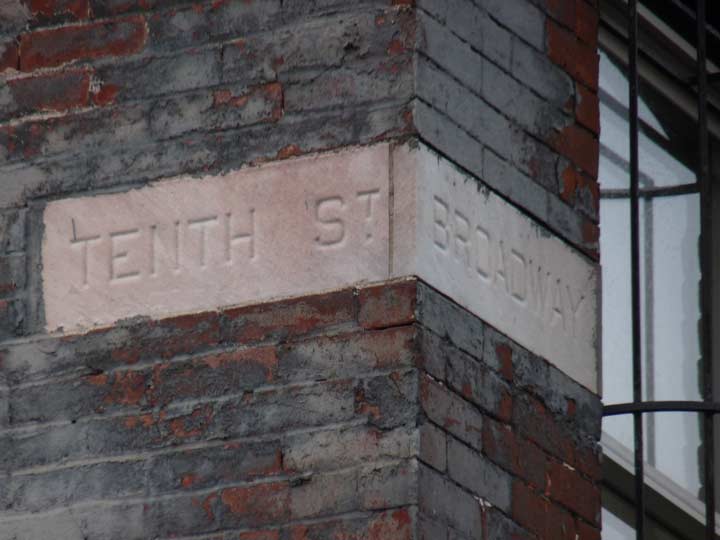 Other Signers: Rockaway Avenue was once Paca Avenue (William Paca, Maryland) and Mother Gaston Boulevard was Stone Avenue (Thomas Stone, also Maryland). Farther afield we have Sherman Street (Roger Sherman, Connecticut). Windsor Place was once Braxton Street (Carter Braxton, Virginia). All these streets were laid out on the Commissioners’ map, circa 1836, and I’m sure that a search will show that at one time Brooklyn had a full compliment of Signers in its street names.

When my mother’s maternal grandfather, Morris Korzon emigrated to New York from Lithuania at the turn of the 20th Century, he purchased a three family home at 321 Keap Street, in what was then a German and Irish neighborhood transitioning into an Eastern European Jewish neighborhood. The Williamsburg Bridge which had opened in 1903, had in essence created an easy passage out from the overcrowded tenements of the Lower East Side to Williamsburg, thus precipitating a demographic change at the time. My great grandfather died in 1946; At that time the city was requesting that the house be retrofitted with fire escapes, among some other upgrades, so my mother’s family decided to sell the house rather than to make the improvements to the aging property. The house was subsequently razed, and a small synagogue was erected on the site. Today, I can not determine what’s existing at that address, as Google Maps street view shows no house numbers or building names.

I must make a correction to my comment above. My mother states that the house was not razed upon sale, and that the synagogue I was referring to, was to the east of my great grandfather’s house, and that there was a one story commercial building to the west; This would mean that there is a whitish aluminum sided building which appears to be residential,l where my great grandfather’s house was.

You forgot Floyd Street, now MLK Place, named after William Floyd of Brookhaven, New York, a signer of the Declaration of Independence. Floyd St. once ran from Nostrand Ave. to Broadway/Lewis Ave. There is only a one block stretch which still exists between Throop and Tompkins Ave. Most of Floyd St. was demapped when housing projects were constructed along most of its length.