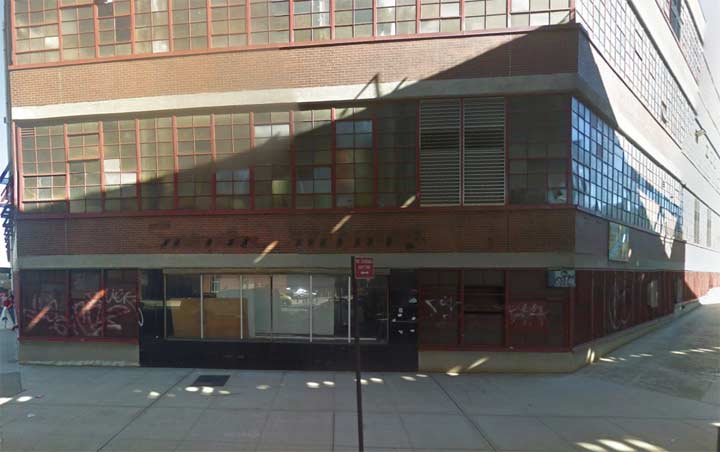 Now home to the Prop N Spoon Company, which provides props for retail shows and conventions, and the City View Racquet Club, this building which fills an entire block and contains over a thousand windows is the former home of Swingline Staples, founded by Jack Linsky in 1925 as the Parrot Speed Fastener Company, changing the name to Speed Products in 1939 and then Swingline in 1956. The company moved to this new headquarters on Skillman Avenue in 1950. In 1998 Swingline eliminated its Queens factory, moving it to Nogales, Mexico.

In 2002 the Museum of Modern Art was renovating its East 53rd street building and moved for a year into another Swingline building on 33rd Street north of Queens Boulevard. In a way, that was fitting because Jack Linsky and his wife Belle were collectors of fine art, including works by including paintings by Peter Paul Rubens, Gerard David, and François Boucher. The works were donated to the Metropolitan Museum of Art and can be found there in the Belle Linsky Galleries. The Linskys were also famed philanthropists, donating millions to charity. But the Swingline jobs have disappeared from the USA.

33-02 Skillman Avenue is home to three large studios for dance and theater artists and a rehearsal studio for musicians.

Swingline was famed for its giant neon Swingline staples sign on the roof, featuring a working stapler. In 1998, when Swingline decamped to Mexico (and from thence to China later), the neon lettering was removed. The 60 by 50-foot sign’s lettering required six men working three ten hour days to pull down.

Above we see additional signage on the Queens Boulevard entrance of the building and, while that signage was also removed, it left a ghost in its place, the only remnant of Swingline remaining in Queens.

A COUPLE OF KEAP-ERS, Williamsburg

My understanding is that there are no good pictures or videos of the sign—or I’ve never found one. Just curious if the vast knowledgeable and quirky audience of this site has any links to one.

Swingline departed LIC for Mexico in 1998; Ford is moving production of 2 models (Focus, & Fusion, joining Fiesta which was never built in USA) to Mexico also. I-Phones are assembled in China, etc., etc. The USA became the first & only nation where the middle class was the majority. How times have changed. Hipster artisans & racquet ball courts are no substitute for a manufacturing economy. Meanwhile, the ruling class has panic attacks over the rise of Queens born Donald Trump, who breaks all of their rules (which don’t work for the rest of us). Are you ready for the American Restoration? Make America great again!

Donald Trump quoted in People (1998):
“If I were to run, I’d run as a Republican. They’re the dumbest group of voters in the country. They love anything
on Fox News. I could lie and they’d still eat it up. I bet my numbers would be terrific.”

Thanks, Kevin. Here’s the proof:

Andy: Either YOU have been played or you’re trying to play us. So how would you prevent more Swingline type defections?

Andy, do your research. That quote is entirely fictitious, another media hatchet job on Trump. I am no fan of the guy, but I like even less the hypocritical media elites that truly run this Country…

So right you are! This is the fall of a nation we are witnessing but alas no one ales seriously or cares.

I used to work in the area in the 1980’s and remember the factory very well.

I still got my USA made Swingline.
No,Condos and apartments provide a bigger tax base than manufacturing,why else would the City
have a long and great tradition of hostility to it.

Can we ban dumb political arguments from this website? The internet is so full of brainless back and forth, and this site is a wonderful respite from that crap. It’s a pleasure to see people talking about history, architecture and NYC culture. Not sure of the mechanism, but once a poster gets into political attack, the discussion belongs somewhere else.

I have great childhood memories of riding the LIRR into Penn Station. As the train went through LIC, just before entering the tunnel, it would pass all those factories where popular products were made, such as Swingline, Dannon Yogurt, Adams Gum, Sunshine Biscuits. And greeting you as you traveled by car or bus across the Queensboro Bridge, were the Silvercup Bread bakery (with its wonderful aroma!), and Eagle Electric. Sadly, all relics of the past.

Like Chris, I still have my treasured LIC-made Swingline desk and Cub staplers from the 1970s. I use them on a regular basis. They still work perfectly and never jam: something that definitely can’t be said about the modern-day ones. I doubt any of the ones made overseas will still be going strong 30-40 years from now.

Hi I am looking for stapers for go Swingline #101 tacker 101-4 .in will be of great help if you know wereI can get some.

After reading this, I had to check my stapler sitting here at my work desk. Yup…Swingline, Long Island City, NY stamped on bottom.

Me too, Hubby and I were just talking that we’ve had our stapler for our whole married life and before 42 years ago!!, Ive had staplers at work that we’ve bought and the new Swinglines (built in Mexico and China), but they don’t last. “They Don’t build em like they used to eh?”

Greetings from central Australia, I found an old stapler where I work and I use it on my desk every day. I like it because it is old and very well made and it looks good next to a 1970s era Casio Nixie tube calculator which also works fine. I decided to google Swingline and discovered the history of this lovely stapler, wish all items of today are made of the same quality as my stapler which never jams.

I have an original Long Island City Swingline stapler and can’t remember when I got it…a long time ago, but it’s still as good as new. I am running out of staples and, on an impulse, searched out this website — which confirmed my suspicions: Another rollicking American manufacturing enterprise sucked dry by China. I can just picture the thousands of employees who worked there, flooding Stillman Avenue when the bell sounded at the end of a shift. They’re all gone, and their paychecks too…a metaphor for the America that was, and no longer is. Can’t tell you how sad this makes me feel. Ave atque vale.

From the New York Times, January 17, 1999: “When Swingline closes completely, 450 jobs will be gone. That is the largest single job loss in New York City from the North American Free Trade Agreement, or Nafta, the 1994 pact that lowered trade barriers among the United States, Mexico and Canada.”

The metaphor for the idiocracy America has turned into, is you.

I have had nothing but Swingline staplers ever since I was a teenager. I’m 74 now. They still work great and never had any problem at all with the heavy duty ones. I was born and raised in Queens and to see all out products go to China and other foreign countrys has been a heart breaker. Putting so many of our people out of work and China making such garbage. They steal the our patents and plans and put their names on it and sell it for much less. We fell for it all! USA needs to start training our people all over again and protect our patents! No more garbage!

My Swingline 444 from the 80s failed today. Looked on the bottom. Long Island City, NY. There’s got to be a way to blame China and the Chinese for this, though.

I have a Speed Products ‘4’ stapler chrome on a black base. The rubber cap is becoming old and deteriorated. Are replacement caps available?

I worked at the Swingline Skillman Avenue factory, as a union electrician, powering up new equipment, in 1987. It was a three week job.
What I remember the most about being there, was the noise of the stamping machines, punching out parts for the staplers. It started with a low chah-chah, followed by- BOOM, all day long.
I always thought that the poor factory workers, must have had that noise, in their heads, for the rest of their lives.

I have a Long Island City Swingline Stapler. I use these staples in it. the staples are 1/2 inch across and 1/4 inch deep:
https://www.staples.com/Stanley-Bostitch-Standard-Premium-Staples-1-4/product_504183

Love my red Swingline, loved it as a metaphor in the movie (office space), fond memories of seeing that huge stapler sign riding the LIRR into Penn Station coming back from my summer trips from CT (reminded me the Marx Brothers movie Love Happy) and thankful for the people who made them.

Just a point of correction- this building’s actual address is 32-00 Skillman Ave. 33-00 is two blocks east. Nice write-up though!

I’m having trouble finding #416 staples for my Swingline 200 tacker. Can anyone help me?

Where can I buy staples for my swingline model no. 10060

I read this because my Swingline stapler stopped
Working, keep getting stuck down. I told my husband I’m going to throw this thing away but it’s our newest one!
He looked, made in China. Pulled out 2 older ones,
easily 1970s 80s, (and look it) made in USA, NY. Work perfectly.
Threw the new one out.

My train from Penn Station to Boston was
often delayed near the Sunnyside Yards
(passenger cars in the Queens. I could see a
giant sign for Swingline Staples.

My Swingline 444 from the 80s failed today. Looked on the bottom. Long Island City, NY. There’s got to be a way to blame China and the Chinese for this, though.