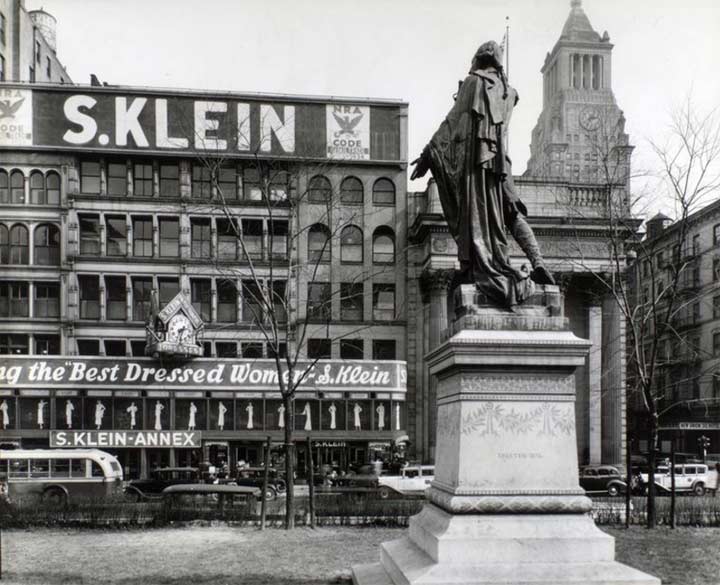 Samuel Klein founded the discount chain S. Klein in 1906, with the flagship store at Union Square East and East 14th Street, and the business eventually grew as large as 19 stores in the metropolitan area before the inevitable decline. The Union Square flagship closed in 1975 (the space is currently filled by the 1987 Zeckendorf Towers apartment complex; the S.Klein Union Square building remained vacant for over ten years after the stores closed). Samuel Klein maintained control until his death in 1942, and the Klein family sold the franchise in 1946 but retained the property.

The company emblem was a measuring square, seen with the clock above the word “dressed” in the 1930s photo shown above. The catchphrase “on the square” was a play on the company’s flagship location at Union Square and its profession of fair business practices.

Two substantial remnants of S. Klein remain, in a doorway on Clinton Street in the Lower East Side marking a former branch, and a giant illuminated sign in Newark, NJ that has never been torn down. 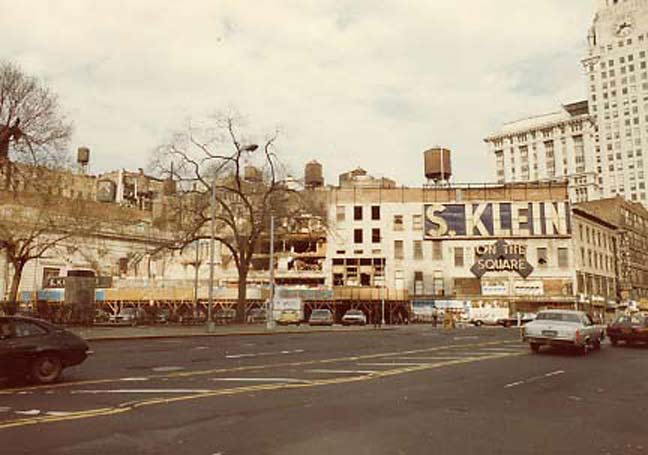 S.Klein on the Square  — note the large measuring square logo under the words “On the Square.” The building is finally under demolition in this 1986 photo by Bob Mulero. 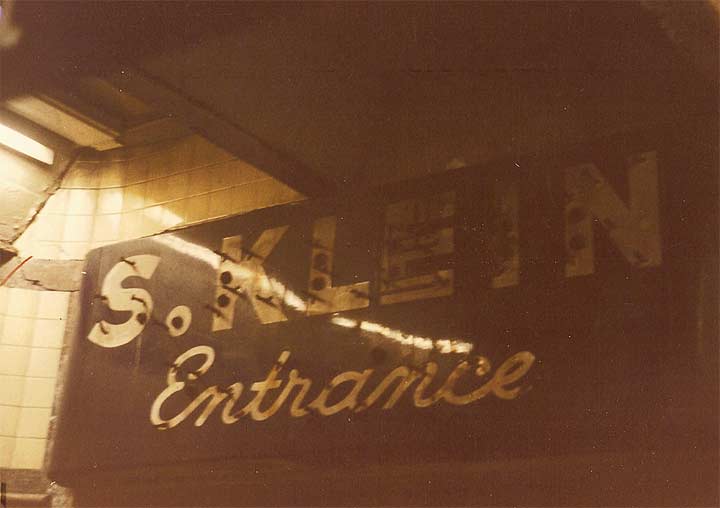 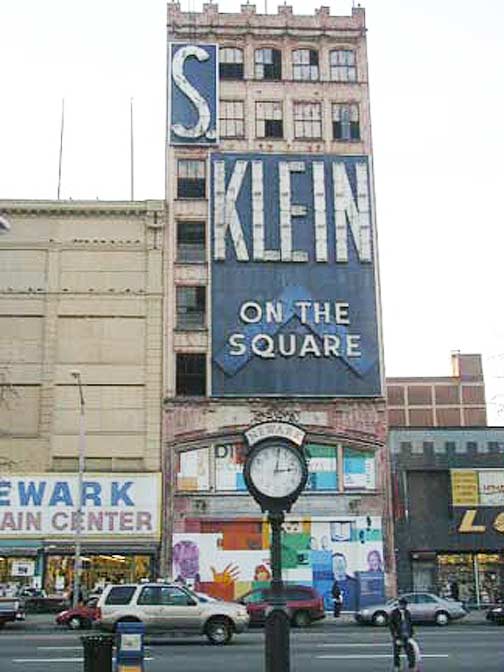 This illuminated S. Klein sign stood silent sentinel on Broad Street in Newark, NJ across the street from Military Park for 37 years after the store closed in 1976. The buildings shown here were demolished in 2013 to give way to a new 20-story building owned by Prudential Insurance. Photo by me in November 2003. 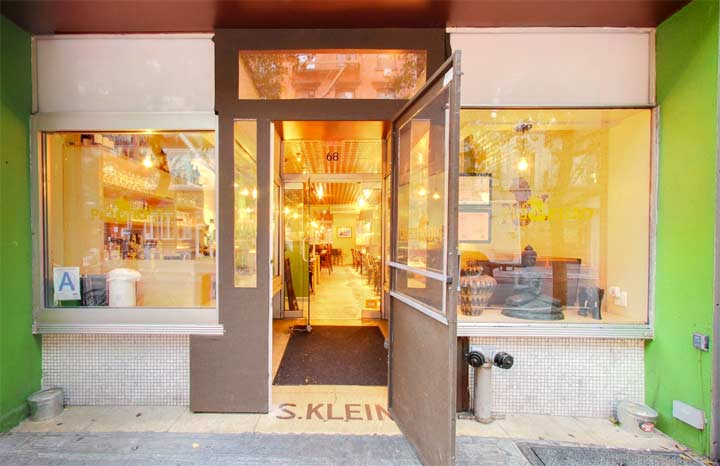 The only immediately apparent sign that S. Klein stores ever existed is in front of 68 Clinton Street in the Lower East Side, currently (206) home to a Pig and Khao, a Filipino-cuisine themed restaurant. Photo Google Street View, which allows you to go right in.

I remember shopping the “bins” upstairs, then opening the drawers underneath them for more. Well worth the effort. My finds were authentic Mary Quant and Rudi Gernreich dresses among other equally fabulous stuff.
There was an old shabby woman on the corner of 14th St and Union Sq in front of the store selling comics daily in the 70’s, one of the the old time “real NY characters”.

They were the first ones to sell Lindt chocolate bars when they were good. went to Kleins store on Long Island.

I lived in that neighborhood 1973-78. May’s never had a store in Flushing. The Gertz store on Roosevelt Avenue became Macy’s, which is still there. You’re correct about Klein’s – became Alexander’s when I lived there.

Growing up in Hempstead on Long Island ca, 1965-68, S, Klein was also a big part of my world. I actually was living more towards the West Hempstead border where E. J, Korvette’s ruled near the intersection of Hempstead Avenue and Turnpikes and Fulton Ave., but Kleins was the classier of the two. Of course, if your family had any money and cared about appearances, you went up to Garden City to places like Lord & Taylor or Arnold Constable, though these were mostly limited to clothing, Kleins or Korvettes were where we bought our appliances and “useful” stuff.

I grew up in West Hempstead and used to ride my bike to KLEIN’s and buy record albums in the basement area – It had three floors as far as I can recall. Somewhere in the 1970’s it became a Korvette’s which was okay, although it wasn’t Korvette’s for terribly long that I can remember. It then became Shopper’s Village and to me, was never the same. I live in Las Vegas now and don’t even LIKE to shop – LoL – part of getting older I guess – as I grew up I worked at Lord & Taylor, A&S, Macy’s, and even JC Penney’s at Roosevelt Field – while going to College – and when you’re a kid you’ll work anywhere and I was cute (back then anyway) so that’s usually what the Stores wanted – I surely wasn’t a very good Salesman because if someone asked “does this make me look fat?” I would be tempted to give an honest response.

The S Klien store at Union Square was like a medieval village – many different buildings with different floor heights, you could walk along the fourth floor and continue on the fifth floor. Chaotic and crowded, it was an NY institutional that had lines outside for sales in the early 70s, but had to shut down only a couple of years later.
I went to Xavier High School nearby in the early 70s, and Union Square was such a neglected place then, all the buildings surrounding the park were dusty and poorly maintained. It was actually a bright spot when the McDonald’s opened in about 1974 – finally something new & clean!

You can see S Klein and a lot of the Union Square area on film in the original “The Taking of Pelham One Two Three” which came out in 1974.

The square could also be a masonic reference.

What was it that Ratso Rizzo said to Joe Buck in “Midnight Cowboy” about Kleins?
It was almost what Tom Cruise said to Dustin Hoffman in “Rain Main” about K-Mart
Somewheres along those lines.
Help me out here

“Where does it tell you to go ? The basement at S. Klein’s ?

I think that is what Ratso said

Still have a tie a bought “on the Square.”

Thought it might be fun share. I found a tuffy electric lighted truck in an old home we are cleaning out. Still in the pkg. I loved reading about the store. Nostalgic memories are literally non existent.

Remember too the “S. Klein” store on Central Avenue, Yonkers.
I am from Westchester county. Central Avenue was full of wonderful stores.
Some smaller businesses did not last long. I do not remember
S. Klein as much as I do Korvettes, also on Central Avenue in Scarsdale.

We lived on Staten Island but a good shopping trip was always to Manhattan. S. Klein was the first stop. If you couldn’t find it there, you had to pay full price somewhere else.

I visited my aunt and grandmother every summer in Yonkers, NY in the 1960’s. I was only a teenager, but the memories of Klein’s and Alexander’s will always remain with me. Shopping on Central Ave was an adventure. Absolutely accurate about the clothing spread out on top of wooden display chests with large drawers holding more items for sale. Everyone would try on clothes right out on the open floor, and that was pretty cool. Right on top of your clothes. My teenage nephew did that a few days ago, and a rush of memories came back.

I used to sell hot pretzels in front of flushing store.10 cents e for a quater

I remember that the big Christmas toy was the Rock’em sock’em robots.

My husband worked downtown and when he
ot off work early in the morning, he rushed
over to Klein’s to get the deals they were giving on the Rock’em sock’em robots. My son was a mere five years old at the time. Of course
Daddy brought them home and hid them under the tree ☺

I went often with my Mom or my Aunt Erma for clothes.

My aunt live downtown for several years. It was always a fun time to visit and Shop in Manhattan.

In 1962 I worked for $1.00 per hour in the women’s hosiery department in the West Hempstead store. Not a very exciting job.

I worked in the Central Avenue store, Garden Department, I was 16, and it was a great store. I loved going to work.. This was 1970. I loved horticulture so Lou Labrandi, the manager let me deal with the clients.
The pay was low, but i would get great tips for bringing plants and peat moss to cars. That job lead me into becoming a Landscape Architect. Lou recommended I go to the University of Georgia, which I did, and loved every minute there too.

Since my name is Susan Klein, I was always a little obsessed with the store, although I have no memories of shopping inside one. (We were always an Alexander’s family). When the Union Square location sat empty in the late 1970’s I was just out of college and I tried very hard to find out how I could purchase some branded signage, but alas, in the pre-internet days this was not as easy as it may sound. I love reading everyone’s memories of S. Klein stores, both in the city and in the burbs.

I remember going to the S. Klein on Union Square and
14th Street in N. Y. when I was a teenager with my older Brother. If it hadn’t been for his buying me clothes and
shoes for School? I wouldn’t have had clothes for
school. May he R. I. P.

I worked at the S. Klein on Central Avenue, Yonkers in 1971-72 as a cashier during my Junior and Senior years at Mount St. Michael H.S. in (the northernmost
section of) The Bronx.

The pay wasn’t great, but the co-workers were all our age and we helped each other out. Favorite departments: Housewares and outdoors Garden. Least favorite: Cameras, because I knew NOTHING about photography!!!

I remember as a young boy in the 60s going to S Klein’s in Woodbridge NJ…… got a Yellow Submarine toy!!!!!

Does anyone remember Empire(‘s) Department Store? I’m from LI, but don’t remember where it was. I believe they had several locations, probably in Queen’s also, but can’t recall. Any help with me “remembering” would be greatly appreciated!

I worked in the Greenbelt Maryland store 1970 to 1971. They were a great store for their time before being acquired by McCrory. But if they stayed in business, Target or Wal Mart would have eventually killed them..

In the 1950s I went to Washington Irving High School until 1pm then to work at S Klein’s department stores which was 2 blocks away from the school on 14 street union square until 9pm. Then I would take the subway to sSouth Bronx where I lived, those were the days.