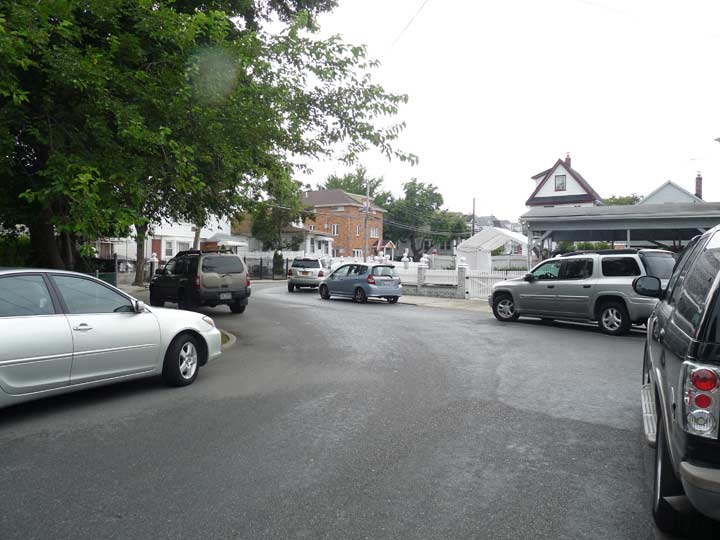 While aimlessly wandering in Hollis the other year, I noticed, when walking north on 184th Street, that it had to make a rather drastic S-curve between 90th and 91st Avenues. The photo is looking north from about 91st Avenue. 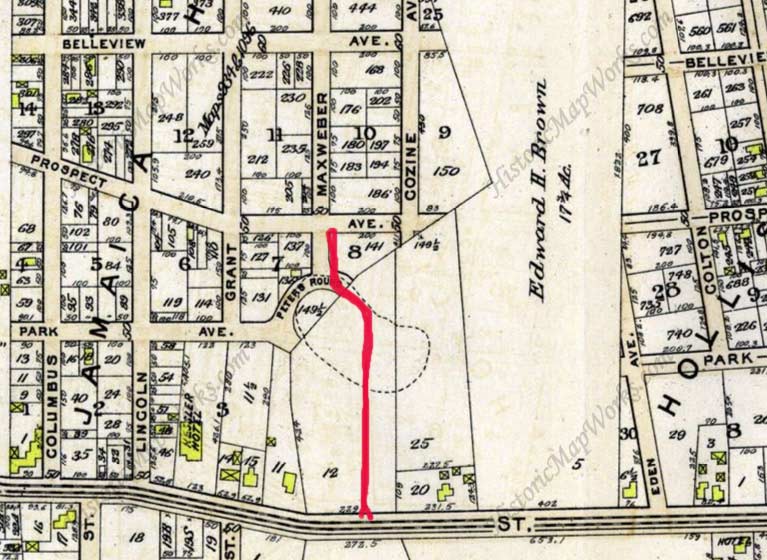 There’s a cause for every effect, so I consulted this Bromley atlas from 1909, and the reason is made clear there. What became 184th Street was originally part of a large parcel owned by Edward H. Brown, and there was a pond on the western edge of the property. When streets began to be laid out in the early 20th Century (the street names were changed to numbers in the 1920s) the pond was originally maintained, and an oval named Peter’s Round was laid out on its northwest edge. Some time after that the pond was filled in, Park avenue (91st Avenue) was extended east, but part of Peter’s Round was included in 184th Street as it was extended south to Jamaica Avenue at the bottom of the map.

What’s more, 184th Street’s former name, Max Weber Avenue, speaks of a former German influence in the area. Weber (1864-1920), from Erfurt, was considered one of the greatest political philosophers of his era.

It’d be cool if the old Peter’s Round name was once again appended to the S-curve, but no one alive now remembers it. Except… Forgotten New York.

How did German philosopher Max Weber get a street in Hollis?

Interesting article; However, the neighborhood referenced in your article is not a part of the Holliswood subsection of Hollis, but is located in Hollis proper. Holliswood takes in only the part of Hollis north of Hillside Avenue.

Lived in Holliswood 40 years ago. Doesn’t it start on its western border at 188th Street to its eastern border of Francis Lewis Blvd? So this isn’t in the area.

Also, it’s on the north side of Hillside Avenue. I lived in the Hilltop Village co-op for 6 years & I had many opportunities to explore the area. It’s an enclave that has many named streets (as opposed to numbered); many of them are serpentine & have no side walk. A genuine urban oasis.

Grew up in Holliswood and you are absolute correct.