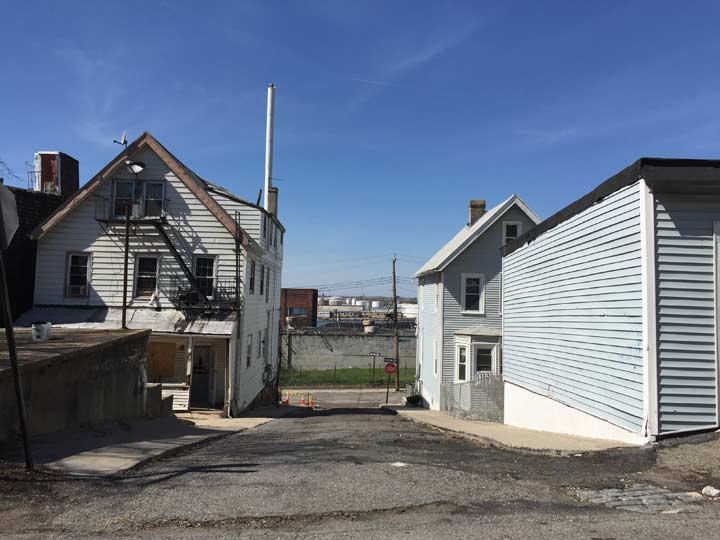 Parts of New Brighton, Staten Island contain some of the handsomest streets, house for house, in New York City. Other parts are utterly forlorn and downright forbidding in spots. Guess which I’m highlighting today.

The New Brighton waterfront is lined with warehouses and abandoned factories that used to produce such products as gypsum, a material used to make blackboard chalk, drywall and fertilizer. The streets are named for obscure United States Presidents such as Marin Van Buren (who hailed from NY State), Millard Fillmore and James Buchanan.

Tucked between East Buchanan and Van Buren Streets near Franklin Avenue is lowly Minerva Place, named for the Roman goddess of wisdom who leaped, fully dressed for war, directly from the head of Zeus according to the myths. It does not rate an address of its own, nor does it rate even a streetlamp. It has not been paved in years and some of the Belgian block pavement is poking through.

It is the Staten Island embodiment of the old classic…

I was born in a trunk.
Mama died and my daddy got drunk.
Left me here to die alone
in the middle of Tobacco Road.
Growin’ up rusty shack,
all I had was hangin’ on my back.

Only you know how I loathe
this place called Tobacco Road.

Actually, it’s nice to see some just plain old unpretentious buildings which look the same today as they did 50 years ago- as opposed to so many which have had fancy windows installed and have been made to look all the same and artificial, because the people who live in them have to play Keeping Up WEith The Jones’s and are trying to deny the fact that they paid half a million bucks to live in an ancient bungalow or row-house.

These are the kinds of places I used to go hunting for when I lived in NYC- old streets with old sidewalks and relatively unmolested buildings (Which are so much nicer than the Fedders Specials which will no doubt replace them sooner or later).

The building on the left especially appeals to me- it hearkens back to a time when people just lived, and the American Dream was still alive and well, even in NYC and even on a blue-collar/tradesman’s [sans corrupt unions and City contracts) salary. When one family could own a house and not have to rent out rooms and apartments to illegal immigrants in order to afford to live there. Life was real….houses were real. Today it’s all facade and appearance- no substance. (And yes, I’m aware that the building on the right has vinyl siding…but tastefully done, at least)

“These are the kinds of places I used to go hunting for when I lived in NYC- old streets with old sidewalks and relatively unmolested buildings.”

Then the North Shore of Staten Island is the place for you! Literally hundreds of unmolested buildings going back to the late 18th Century can be found along Richmond Terrace, Henderson Ave and Castleton Ave (the main east-west corridors in New Brighton, West Brighton, Port Richmond and other neighborhoods in this part of the Island). On the one hand, it’s a bit sad to see so many bedraggled buildings waiting for a little TLC, but on the other hand, it’s nice to see the trust fund kiddies haven’t bought them all up and turned them into “hip” bars or bike shops (yet).