In May 2016 I decided to walk up Pearl Street’s entire length from Battery Park to Tribeca. It’s an oddly positioned street, as far as downtown goes, first running northeast, then gradually turning northerly and even westerly. Its entire length once ran to Broadway and Thomas Street, though it has been trimmed back from that due to mid-20th Century constructions. Because of the Landmarks Preservation Commission’s two separate landmarked districts, Pearl Street, unlike most downtown Financial Street ways, looks much as it did in the 19th Century along some stretches; other streets downtown run through concrete, masonry or glass canyons…

At the end of Part 2 I had just passed the South Street Seaport area. If you look at an older map of the area…say 1850… 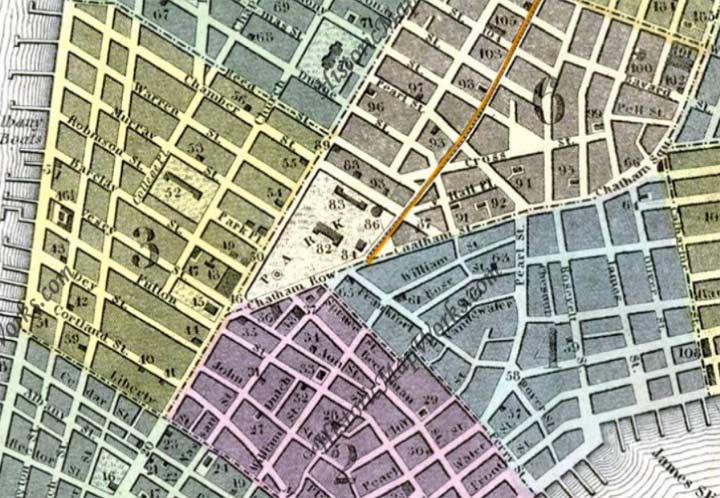 … Pearl Street here begins a turn to the northwest and acted, at the time, as a divider between the street pattern of lower Manhattan and the streets that edge up the spine of the Lower East Side, such as Monroe, Madison, Cherry and Henry. Over the centuries this particular aspect of Pearl Street has been obliterated as major projects like the Alfred E. Smith Houses have been constructed as well as the Brooklyn Bridge and, decades later, the East River (Franklin D. Roosevelt) Drive and its approach roads, which have served to obliterate the street pattern you see at the lower right corner of the map.

Pearl Street, however, is the sole street that has been mostly retained. Until about 1812 the section west of Chatham Street, now Park row, was called Magazine Street, after a storehouse for gunpowder — a leftover name from the Revolutionary War. The city decided to rename the section as a northwest and western extension of Pearl Street at that time.

Note the number 58 on the map at what used to be the place where Pearl Street turned north and forked into what was then Cherry Street. 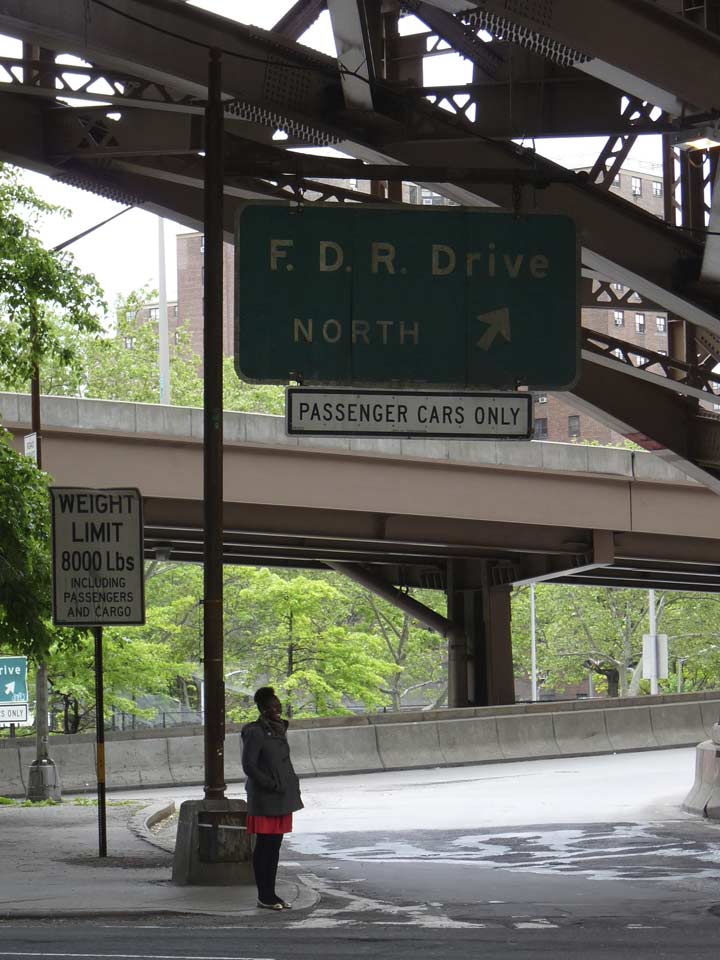 That spot is approximately where Pearl Street passes under the Brooklyn Bridge. In the colonial period, however, the home of George Washington during his time as US President, 1789 to 1790, #3 Cherry Street, stood there. The three-story brick residence had been built in 1770 by Walter Franklin and during British rule, the intersection was called St. George Square for the patron saint of England; after the Revolutionary War the square was changed to Franklin Square — for Walter Franklin, not Benjamin.

The national capital, and George Washington, moved to Philadelphia in 1790. The mansion itself was demolished in 1856. 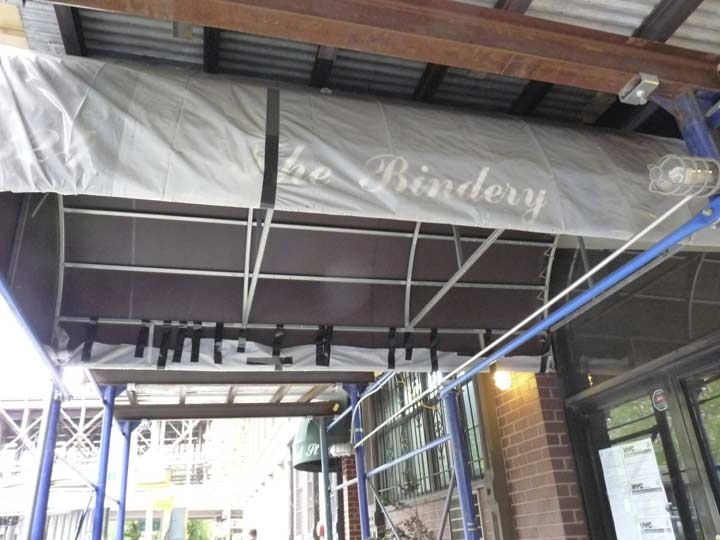 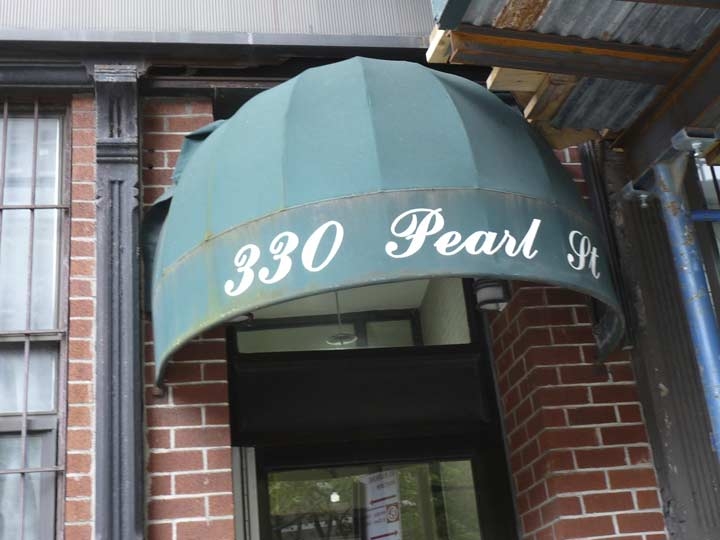 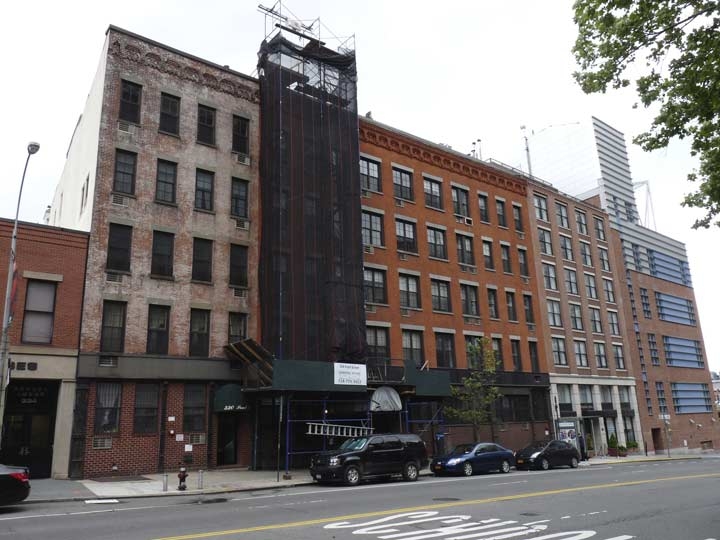 A group of surviving brick buildings on Pearl Street’s east side is dominated by #330, “The Bindery,” a video production studio, which used to be home to a German bookbindery, and probably headquartered others. We are still in an area of NYC once dominated by printers of books, magazines and daily newspapers. 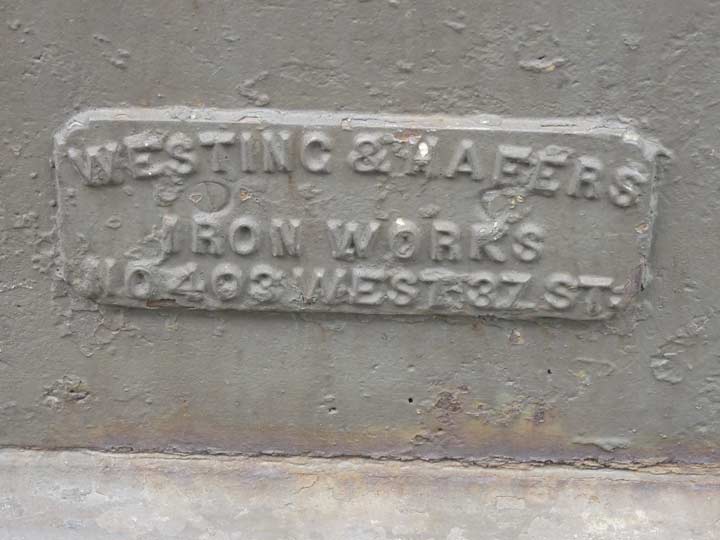 A name plate on #330 Pearl near the sidewalk identifying Westing & Hafers Ironworks, 403 West 37th Street. The Indispensable Walter Grutchfield reports that the W&H was in business from 1874 to 1946. 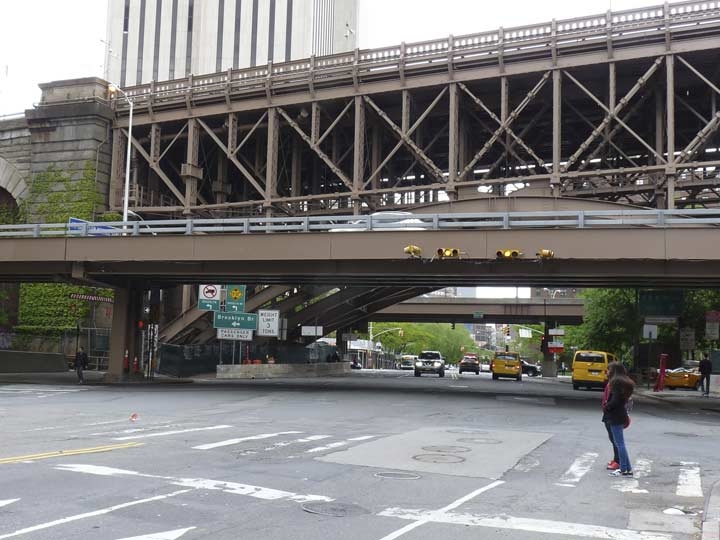 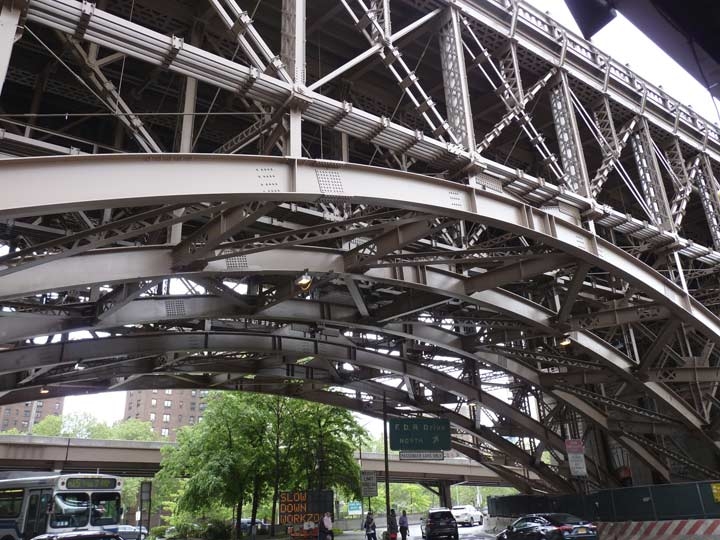 The Brooklyn Bridge is rightly remembered as the first bridge to span Manhattan and Long Islands when it was constructed from 1870-1883. However it also includes a handsome metal arch bridge spanning Pearl Street at Dover at the same spot where George Washington’s Manhattan residence once stood.

Help me out with something, though. An elevated train that would split uptown into the 2nd and 3rd Avenue Els once ran above Pearl. Was the arch bridge built to replace something else after the El came down in 1942? kevinjudewalsh@gmail.com.

Courtesy ForgottenFan Dovid Simcha Freiman, this is the original bridge from 1880. 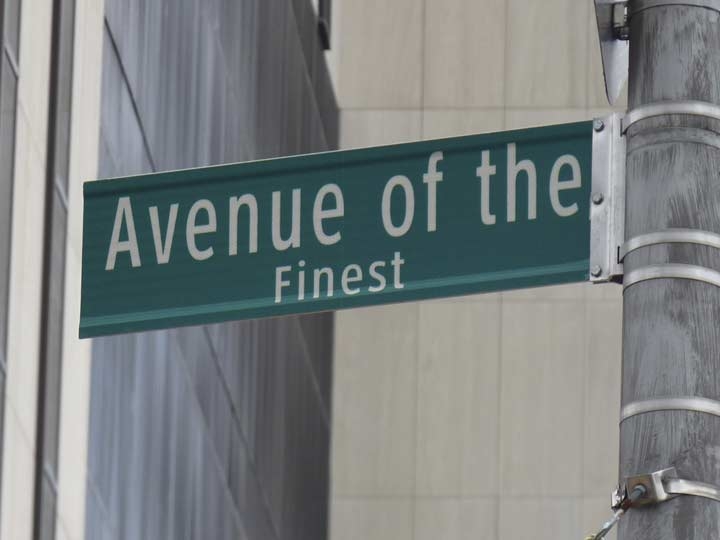 When the new NYPD headquarters was constructed in 1973, and earlier when the Al Smith Houses were built in the 1940s, an entire warren of interlocking small streets was eliminated and two new streets were built: Avenue of the Finest (commemorating the NYPD) between Park Row and Pearl Street, and Robert F. Wagner Sr. Place (1877-1953), between Pearl and South Streets, for a German immigrant who became a state senator, NYS Supreme Court justice, and NYS Senator; his son, RFW Jr., was NYC Mayor from 1954-1966.

The Department of Transportation sign shop no doubt has spec sheets and templates that say “large letters on top, small on the bottom,” which leads to situations like this and in spots on the Avenue of the Americas signs. In the type biz, we call this “following specs out the window,” and you are usually injured that way. 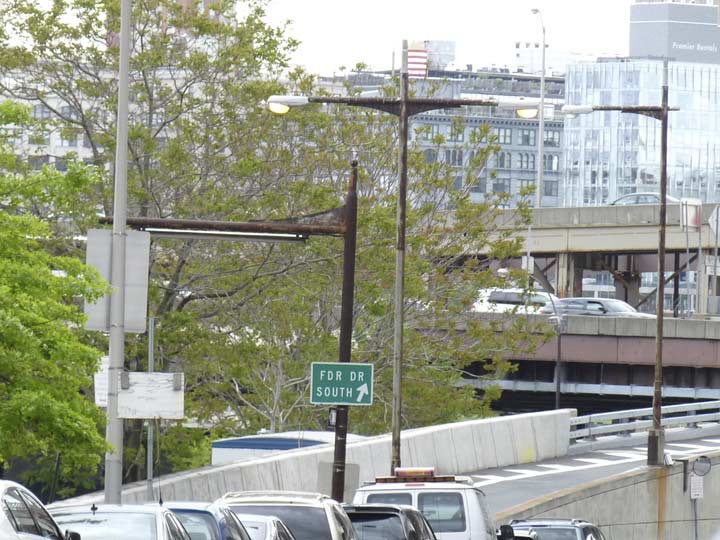 The off ramp from the FDR Drive onto RFW, Jr. Place is a repository for 70+-year old “Whitestone” style lampposts and sign stanchions. both were formerly fitted with incandescent lights. They are, of course, waiting for the next overhaul to wipe them out of existence. 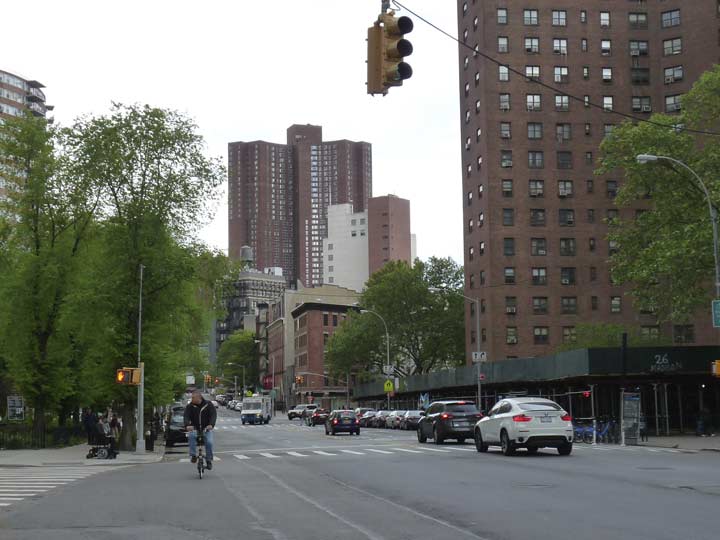 Looking north from Pearl Street at Avenue of the Finest. However, past the white crossing stripes, you’re actually looking at St. James Place with the Al Smith Houses on the immediate right. Beyond the stripes the road is called St. James Place.

In 1856 the Bowery was extended south from Chatham Square to meet Pearl Street at the point it began a sharp turn west. This bit of new road was christened New Bowery, and it remained thus for 92 years until it was renamed in 1947 for St. James Church on nearby James Street, the parish church attended by Al Smith, one of NYC’s most prominent figures in the Democratic Party in the early 20th Century, a 4-time NYS Governor and unsuccessful Presidential candidate in 1928.

In the photo, the street trailing in from the left side is Pearl. 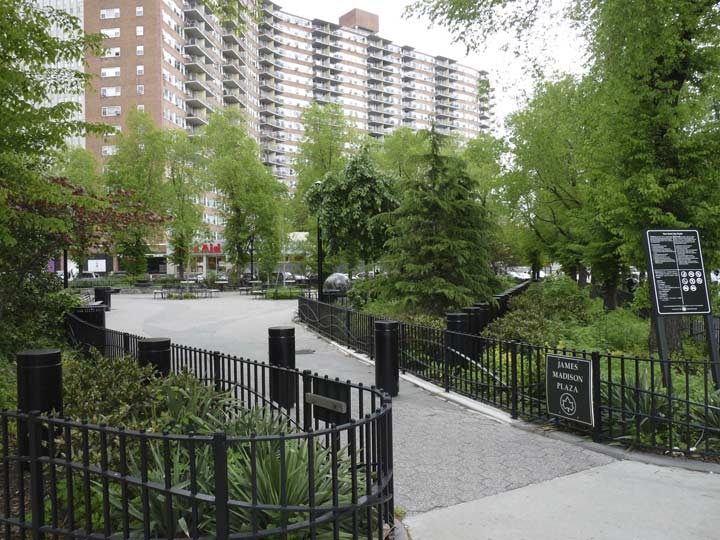 The public park sitting in a triangle defined by St. James Place, Madison Street and Pearl is known as James Madison Plaza, after the USA’s 4th President and two of the bordering streets. A fountain in the shape of a granite sphere was installed during park renovations in 2013. 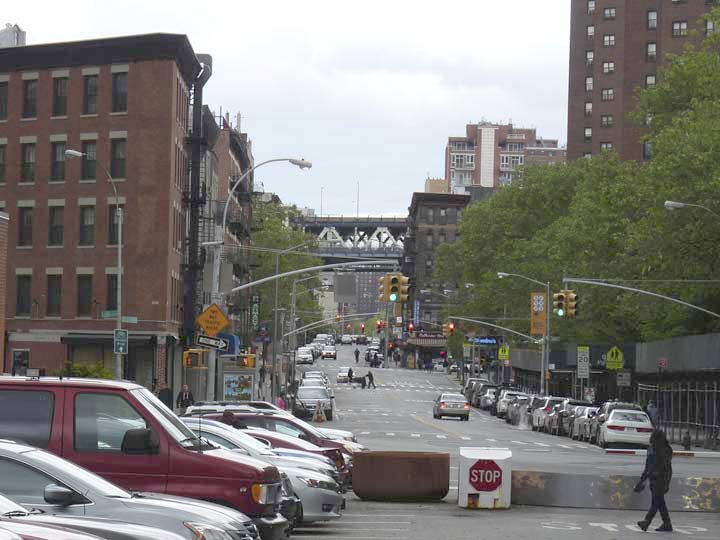 We’re now in realms where the Google Street View truck cannot enter. Looking northeast on Madison past an NYPD barrier toward the Manhattan Bridge. 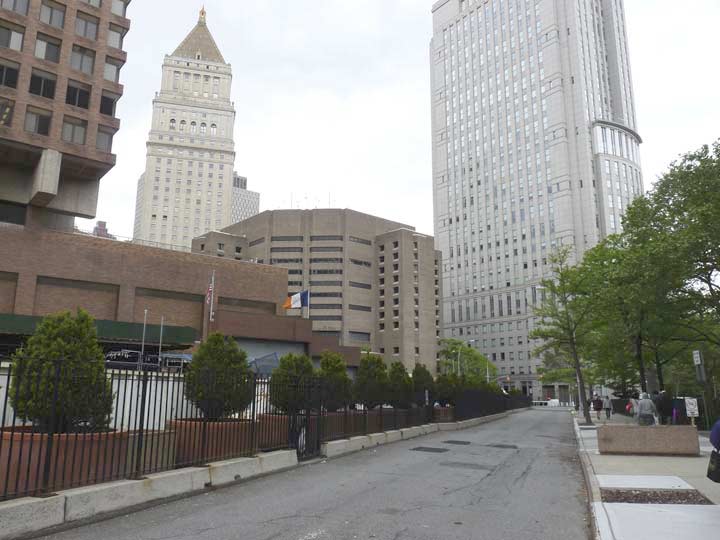 Pearl Street narrows to a single lane west of St. James Place. Ahead are the Thurgodd Marshall US Courthouse (1936, left) NYPD Headquarters (1973) and the bland skyscraper US Courthouse Annex (1995)at 500 Pearl, since sub-named for the late Senator from NY, Daniel Patrick Moynihan. 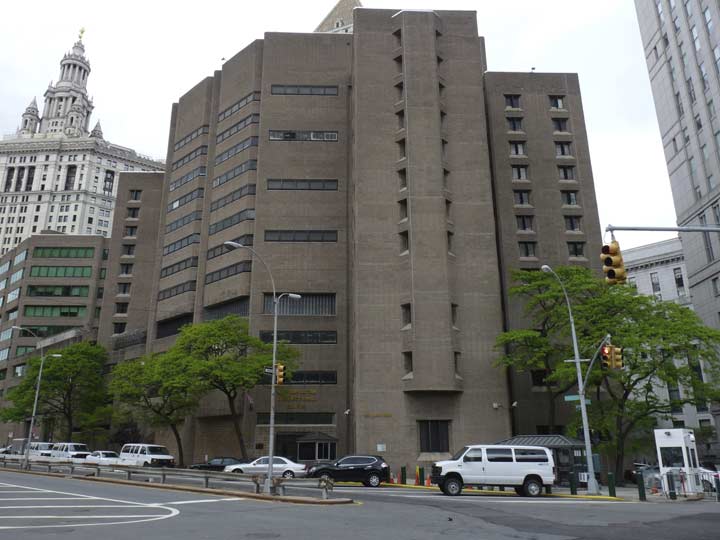 As stated previously when it was first constructed in 1973, the “new” NYPD Headquarters helped erase from the map a large number of streets, including the north end of William, the north end of Cliff, Vandewater and Hague, among others. The HQ replaced a beautiful domed building at Centre and Broome that still stands and is home now to million-dollar condos. Park Row, the only surviving NYC street called “Row” (there are a number of them in London) runs from Broadway at City Hall Park northeast to the Bowery at East Broadway (Chatham Square). It is an original part of the Post Road to Boston, which was built atop a Native American trail in the 17th Century. Much of it except for Park row and the Bowery has vanished in Manhattan. Between 1774 and 1886, Park Row (named for City Hall Park) was called Chatham Street for William Pitt, Earl of Chatham (1708-1778), who favored American independence; the city of Pittsburgh, PA was also named for him. Pearl Street, looking west from Park Row. The light green Bishop Crooks at right are among the first examples of the revived form, which reappeared in the early 1980s. On the far left is the back end of the Marshall Courthouse. The Moynihan Courthouse Annex stands on the right side. A pair of skybridges spans Cardinal (Patrick Joseph) Hayes Place, one of the old warren of streets that was surprisingly preserved from the old days, connecting the NYPD HQ with the Marshall Courthouse. The short lane, which dead-ends at St. Andrews Plaza, was once called City Hall Place and was was renamed for the prelate, a parishioner of St. Andrews and an area resident, in 1941. This pedestrian path between Pearl and Worth Streets between courthouses was formerly called Kent Place. 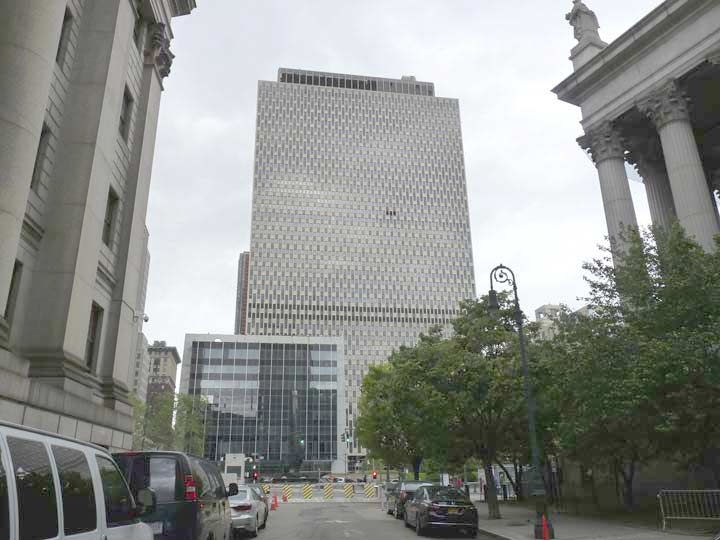 The westernmost existing block of Pearl Street runs between Park Row and Foley Square. Looming ahead is what replaced the former westernmost block: the Jacob K. Javits Federal Building, one of the more heavily guarded buildings in NYC, “an ungainly checkerboard of metal and glass” according to the AIA Guide to NYC Architecture. 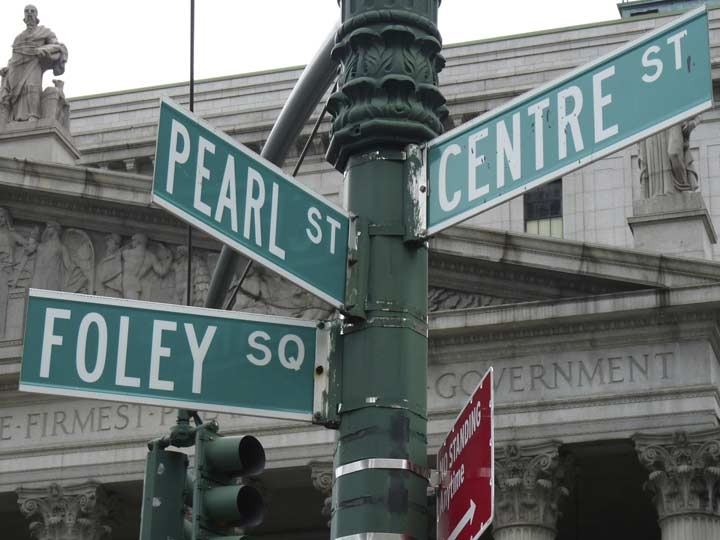 If you watch cops or courtroom shows such as Law and Order, these magnificent structures flanking Pearl Street at Foley Square (named for Tammany politician “Big Tom” Foley (1852-1925) will be familiar to you: The NY State Supreme Court Building (orig. NY County Courthouse, 1913-1927) and the front of the Thurgood Marshall US Courthouse (1936). You’ll also be familiar with them if you have been an attorney, plaintiff or a defendant. Triumph of the Human Spirit, completed in Foley Square in 2000 by sculptor Lorenzo Pace, honors the souls discovered in the nearby African Burial Ground at a construction site on nearby Duane Street in 1989. The remains have been honored formally at the site at Duane and Elk Streets by the National Parks Service.

Kevin – I have only just now finished reading your magnificent (2016) three-part exploration of Pearl Street, NY City. I enjoyed your photos and accompanying explanations greatly. My interest in Pearl Street stems from my recent discovery that my GG Grandfather had an Upholstery Shop at 483 Pearl Street in 1839. He arrived from England in 1832, and established his Shop thereafter. I am writing to thank you so much for your wonderful series, and to ask if the exact location of his 1839 shop could possibly be determined? Google Earth did not help, but perhaps that location is in an area not monitored by Google Earth?? Any help you can give me is greatly appreciated!. Best wishes to you in your excellent endeavors.

You have no idea what a gift it was to find all this information! Thank you so much. I have been looking for City Hall Place, Pearl St. Duane, Chambers and more while investigating history in my family tree. My family lived in a tenement in the area and we’ve been trying to locate information. Knowing what the buildings are now I can backtrack into the history deeper. Thank you again.

I’m looking for info about 214 and 216 Pearl street owned by Theodore Roosevelt Sr. (the president’s father) in 1866 (first mentioned in Trow City Directory). It was a secondary place of business for Roosevelt & Son, 94 Maiden Lane. Was this an overflow warehouse? I tried to look at the address on google earth but it doesn’t show up. A publication on google books “Cornelius V.S. Roosevelt against the mayor” describes them loading and unloading plate glass at 214 and 216 Pearl Street. Not sure how long they owned it. Landmark Preservation Commission report for 90-94 Maiden Lane mentions on page 7 that Roosevelt & Son temporarily moved there in 1876 but they list it as a business address starting in 1866. Do you know what is located on this site now?