As it turns out two of New York City’s most iconic bridges — both of which link three boroughs — are celebrating key anniversaries this year. The Hell Gate Bridge, which crosses its namesake strait between Queens and Randall’s Island, turns 100, while the Triboro (Robert F. Kennedy) Bridge is a wee spry lad of 80.

It can be argued that the massive Hell Gate Bridge, which itself consists of two large spans and massive viaducts and approach ramps was the ‘original’ Triborough Bridge, as it, too, touches three boroughs, connecting Astoria, Queens and Port Morris, Bronx, via Wards and Randalls Islands which are politically in Manhattan. It serves both rail and passenger rail traffic. Freight tracks attain it in Queens from both Sunnyside Yards and the NY Connecting Railroad and Fresh Pond Yards; in the Bronx, it allows trains to run to northern NY State and New England. 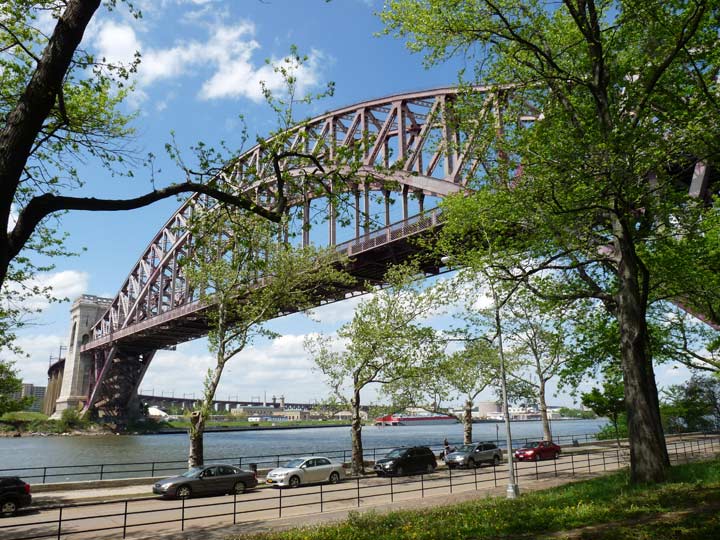 The tubes connecting Long Island with Penn Station opened in 1910, and Hell Gate Bridge, connecting Long Island with the mainland, opened in 1916 as the lengthiest steel arch bridge in the world until surpassed by the Bayonne Bridge in 1931. “Hellgat” means ‘beautiful strait” in Dutch, but lived up to its English transliteration as an extraordinarily dangerous stretch of water due to conflicting currents of the East River and Long Island Sound, as well as a great deal of rocks that made it treacherous for shipping until the rocks were dynamited into rubble. The construction was overseen by Gustav Lindenthal, who worked on the Williamsburg and Queensboro bridges as well. In the mid-1990s it was painted a deep maroon, which the sun has faded to light magenta. 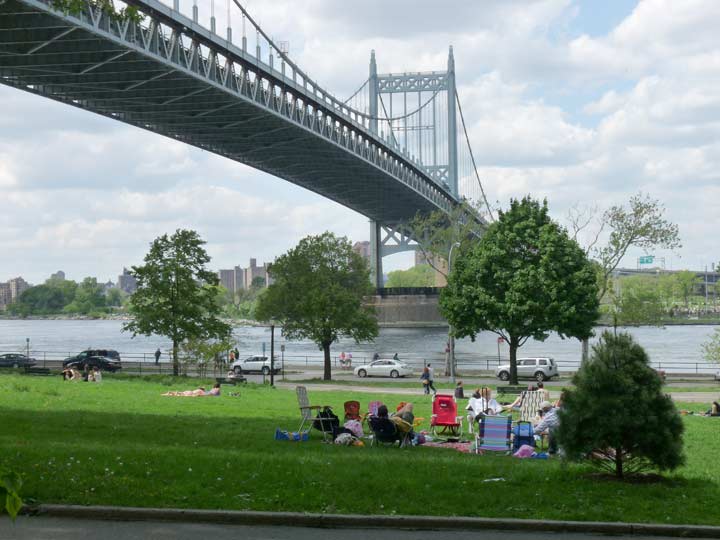 The Triboro Bridge, linking Manhattan, the Bronx and Queens via Randall’s Island, features three major bridges and a number of other smaller bridges and ramps. Though it was begun in 1929 the Depression halted construction until 1932-1937 until finished by Othmar Ammann, the Swiss-born greatest bridge builder of the 20th Century. It is the last of Robert Moses’ great bridge crossings to feature an extant pedestrian walk.*

The main span is 1380 feet (421m); it is the longest of the Triborough’s three spans, and the total length including approaches is 2780 feet (847m). Unlike the other two spans, it contains just one narrow sidewalk, on the north side. The towers are 315 feet (96m) in height. Architect Ammann designed most of the City’s great bridges of the 20th Century: The George Washington; Triborough; Bronx-Whitestone; Throgs Neck; and Verrazano-Narrows.

According to legend, a sign on the bridge once read, “In event of attack, drive off bridge.” Since the bridge roadway is the equivalent of 15 stories from the river,  that advice would have meant certain death.

The Triboro was the site of ForgottenTour #48 in September 2011, and more info on the Triboro is available on the wrap up FNY page.

When originally opened in 1939, the Whitestone Bridge had four lanes of traffic and two pedestrian walkways.  The Whitestone had a “sister” bridge, the Tacoma Narrows Bridge in Washington State, which is remembered as “Galloping Gertie.”  The Tacoma Narrows suffered badly from vertical oscillation, and, was famously captured on film when it ultimately collapsed.  There were serious concerns that the Whitestone could suffer the same fate.

Major reconstruction was undertaken in 1943 which added some 6,000 tons of steel trusses to stiffen the bridge.  During that project the two pedestrian walkways were removed and the space was given over to make two more traffic lanes.

The extra weight of the trusses later caused serious stresses on the suspension cables, so another much-needed reconstruction was undertaken in 2003.  Simple triangular-shaped fiberglass fairings were installed along the outside of the roadway to slice and deflect the wind and minimize the oscillation problem.  This allowed for the removal of the heavy trusses which were not considered in the original design calculations.  While doing this restored the original streamlined look of the bridge, the pedestrian pathways were never considered for reinstall action and they will forever remain a footnote from the first decade of its history.