NYC King of Lampposts Bob Mulero snapped this scene at the west end of Canal Street in 1977. Here’s a special edition Type 24 Twin post, and in the background, an arch bridge that carried the old West Side Highway over Canal Street. I’ll take these one at a time…

I call the Special Edition the German Helmet Twin, because instead of the usual center finial, there’s a metal sphere topped by a spike. The sconces supporting the Bell luminaires are also a bit more ornamented than the usual type.

Just one German Helmet remains in existence today, on the monumental Twin at Amsterdam Avenue, Hamilton Place and West 144th in Harlem.

As for the arch bridge, it was installed at a date I’m not sure of to eliminate the pillars on the underside of the elevated highway (or it may indeed have been built when the rest of the Miller was, in 1934). In the early 20th Century Canal Street had a lot of truck traffic toward the docks on the Hudson River west of the Miller, and the trestle was probably installed for that purpose.

There’s also a curious bit of public art on the median next to the Twin. If anyone can identify it, give me a buzz.

It looks like the ‘curious art’ is a snow plow blade and its mount, lying face down on the blade in front of a early 70s Volvo.  The ‘Cobra’ on the right is probably some poor driver’s exhaust system. 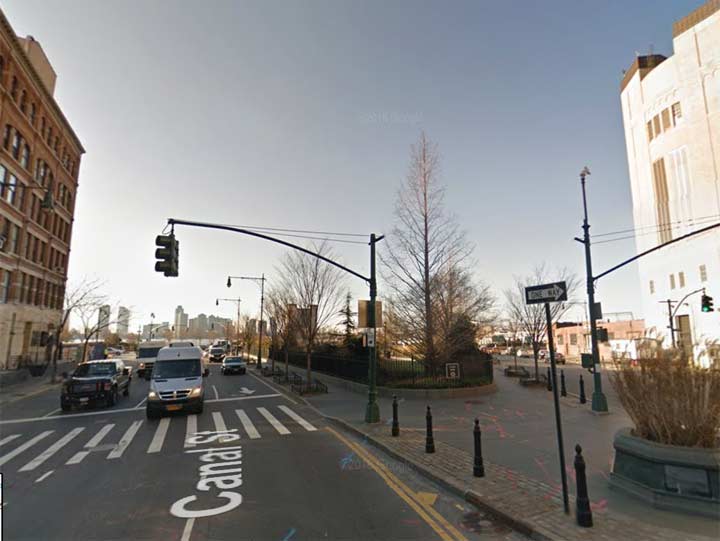 From Google Street View, here’s the same scene today. Within the past decade, a triangle park was built where Canal Street splits in two before ending at West Street. The West Side Highway had been closed in 1973, but the city, out of money at the time, lollygagged on removing it, and the last of it was torn down in 1985.

Finally, the section of Canal Street on the left once had a name all its own: Hoboken Street (the NJ town faces Manhattan across the Hudson from Canal Street, but not directly; Jersey City faces Canal Street in actuality).