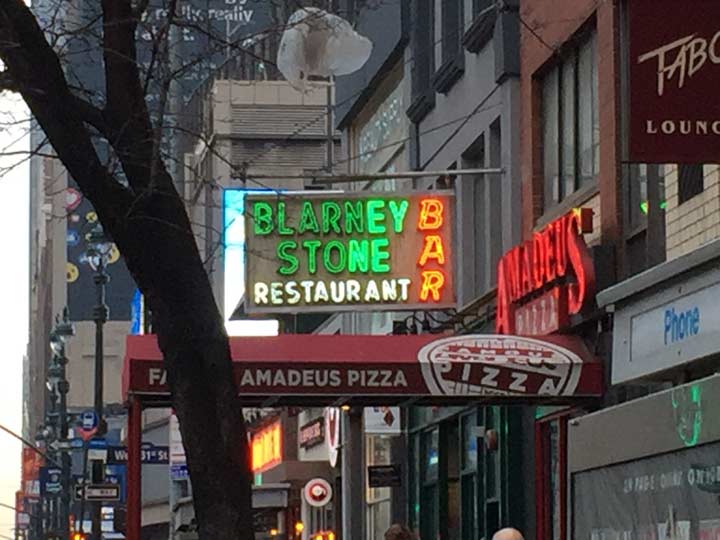 The Blarney Stone bar on 8th Avenue between West 31st and 32nd near Penn Station is among the last of its breed. The chain of bars in its heyday once consisted of 34 locations, all of which featured relatively cheap beer and booze and a steam table with yes, corned beef featured. But they were far from dives. 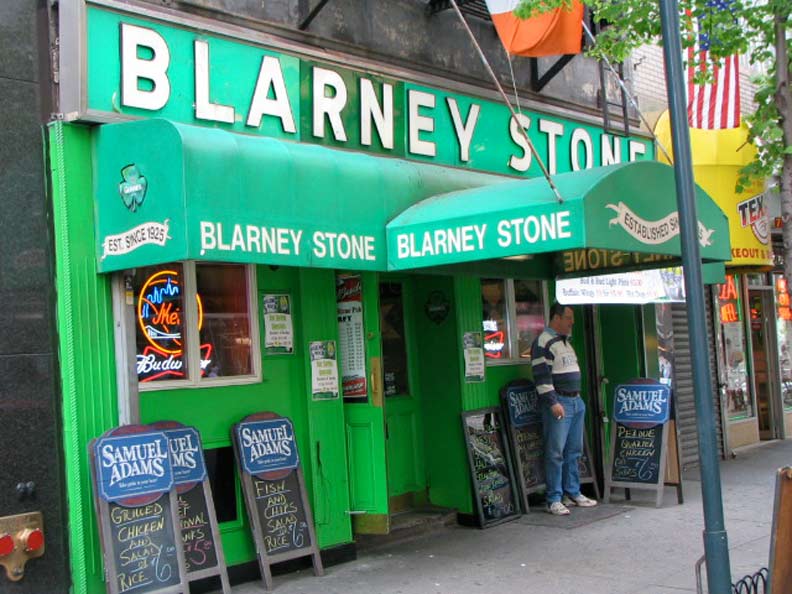 My friend Gary, who has since moved to Atlanta, worked across the street from me for a time during my Photo-Lettering employment between 1982 and 1988. He worked daytime hours and I worked nights, but at times we would meet at this since-disappeared Blarney Stone on 3rd between 44th and 45th for a few, him after work, me before.The chain is named for Ireland’s namesake stone, located at Blarney Castle outside Cork. According to legend, kissing it gives the kisser prodigious persuasive powers.

According to Ephemeral New York, the whole thing was begin by Irish immigrant Daniel Flanagan, whose first Stone opened on 3rd Avenue and East 44th in 1952.

One other remains as of March 2017, on 11 Trinity Place in view of the Brooklyn Battery (Hugh Carey) Tunnel.

“Comment…as you see fit.” Comments are again open on FNY!

My mother came here with a friend who eventually married Dan Flanagan. From what she told me, he would sponsor people to immigrate and give them 49% ownership in the bar. He would put up the money to open it and own 51% of the bar. He was a good man and a family friend and gave many Irish immigrants a properous future

For the most part, I just pass by this place whenever I go to see a Knicks or Liberty game over at MSG, though I’m not that much into bars to begin with and that’s regardless to what theme they are, which is mainly that I hardly drink anything alcoholic to begin with.

PS: Yes I said Liberty and they do exist as they have been around for 20 years and will be starting their 21st season in two months.

Yeah the 8th ave Blarney was spiffied up a few years back and lost it’s charm unfortunately. It’s pretty generic these days. I always wondered about the history of these joints though, I remember there being a lot of them, but am surprized there were so many at it’s peak.

My grandfather was Peter Walsh, who owned this Blarney Stone during much of that time. I know that this is a super old thread, but on the off chance you get this, I’d love to know more about him. He died when I was young, but he meant the world to me.

In the early 70’s when cable was in it’s infancy it was only available in and around the Garden. As young hockey players and Ranger fans from the Bronx we would travel to the Stone around the corner to watch Ranger HOME games!!!! We werent old enough to drink but we sure did eat good!!! Eventually as cable spread from there we would travel to a teammates apt. on B’way and 157th to watch the games!!! Great memories!!!!

I sometimes went into these places back when I was in my late teens, not to drink—I distinctly remember the smell of stale beer, and staler old guys—but to get one of these not-very-good, but hey, it was cheap, corned beef sandwiches. A group I was a member of in the early 1960s used to meet at the Smith’s Sixth, just south of 14th Street on Sixth Avenue. Much the same sort of place.

Hey, Photo-Lettering! I’ve got one of their hardcover catalogs, from 1971, published by Van Nostrand Reinhold, part of a collection of type and design books, Champion Papers catalogs, issues of PRINT and COMMUNICATION ARTS, etc. And I still have lots of sheets of Letraset, from when I published a magazine out of my living room, but couldn’t afford to use P-L.

Did you ever notice that the type house Scarlett Letters eventually evolved into a company that does opening and closing credits on movies?

The Blarney Stone got me through a lengthy divorce and afterwards also. During my divorce I immersed myself in work, would work 5 day’s a week 13 hours a day because it sucked going home to an empty home, besides I did not ever cook for one person. So every night after work I would stop at the Blarney Stone for dinner and a pint. I think at the time it would only cost me 7.00 for the meal. After the divorce I liked the food ,the people, and of course the pints that I just continued to go every night for 6 years. I miss that place since I was transferred to Long Island, but I make it a point to stop there and eat every time I have to see a concert or sports event at the Garden.

Loved them!! Their brisket and corned beef were great and went very well with a glass of beer. Especially back when the World Series was an afternoon event. I think a lot of them eventually became OTB parlors..what are they now??

There were also a few imitators, or similar chains. I remember one in downtown Brooklyn in the 1970s, around Court & Joralemon. It may have been called “Blarney Rose” or something like that.

Most of these statements are written by TRUMP SUPPORTERS. Making AMERICA “GREAT AGAIN”. Just how it used to be. Go to Blarney & have ONE on US!.

The political gospel descended into a cult of personality descending into a death cult.