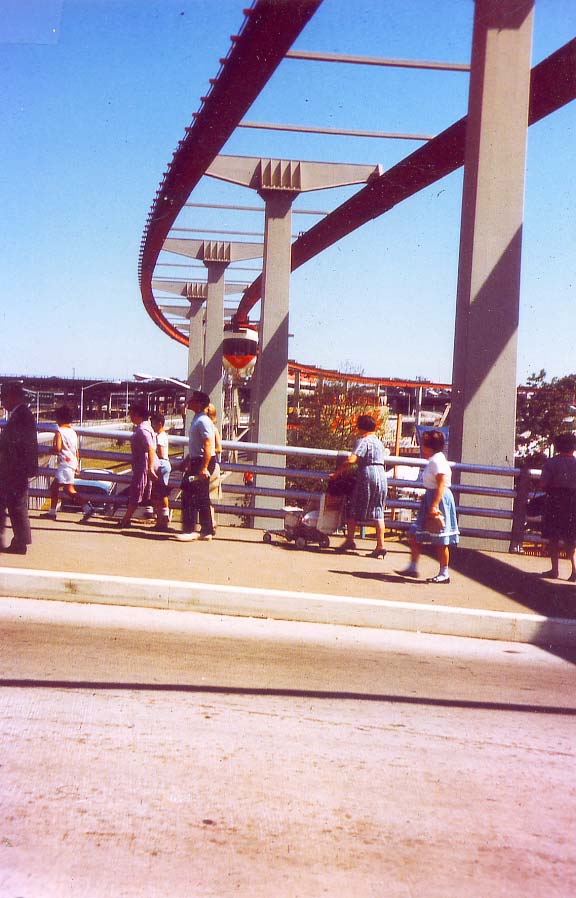 I really wish the old man had gotten a photo of the World’s Fair 1964-1965 monorail with some actual cars in the picture, but I’m working with what I have here. I remember the Fair but I don’t remember riding the monorail; but I was 7 and 8 years old during the Fair. This photo shows it above the Long Island Expressway, which was only a few years old itself in 1964.

Here’s some info from NYWF64, the comprehensive World’s Fair site…

On the World’s Fair monorail, built by American Machine & Foundry Company, trains ride below the track, suspended from overhead power units with rubber tires. The route is a loop 4,000 feet long, with three trains traveling in one direction while four others travel in the opposite direction on a parallel track. The loading platform, reached by escalator, is halfway up a terminal building that has an arched base and an inverted arch for a roof. The eight-minute monorail ride provides a spectacular view of the Fair and offers photographers many unusual angel shots from the panoramic windows.
* Admission: 80 cents.
* Hours: 9 a.m. to 2 a.m.
“Comment…as you see fit.” Comments are again open on FNY!
3/16/17
Flushing MeadowsQueens
18 comments
FacebookTwitterPinterestLinkedinEmail
previous post

I was born in ’62 so I’m too young for any Worlds Fair memories. I know Flushing Meadows-Corona Park pretty well, just hard to imagine it with all those buildings and all those people.

The image does appear to show red and white cars on the right-most track, in a head-on shot between the uprights.
I don’t recall riding the monorail but certainly the Ford ‘ride’ and the cable car.

that’s pretty cool if true – went there last year / year before and i dont recall seeing a monorail? very likely i missed it though

The monorail at Dutch Wonderland rides on top of the rail while the NYC World’s Fair AMF monorail was suspended under the rail. https://www.dutchwonderland.com/things-to-do/attractions

My family rode it once (I’m your age give or take), around dusk. It was an amazing ride, especially for a train fan. My only complaint was that the ride was too short. I also remember that James Bond’s Aston Martin from Goldfinger was on display very near to the station at the time. Thanks for the memories!!

CARS RIDE ABOVE THE RAIL MOUNTED ON SINGLE POSTS AT DUTCH WONDERLAND.

For good reason, as the folks who built the monorail and who manufactured the bowling alley equipment were one-in-the-same!

I rode on this, on one of my trips to this World’s Fair. A couple of decades later, rode the monorail when I stayed at the Disneyland Hotel during a convention in Anaheim. Smooth ride, both times!

Two edged comment, my dad and brothers worked constructing many fair buildings, and building in general, and valiantly fought sobriety at many Blarney Stones, and similar establishments throughout the city. Good times.

I grew up in Elmhurst and visited the Fair many times as a 6 & 7 year old child. If you rode your bike around the park after the fair was dismantled, you would hit these big “bumps” on the paths. Although they looked like speed bumps they were actually the remains of cement foundations for the monorail columns. It took many years and many path reconstructions before they were all eliminated.

We didn’t take it because it wasn’t cheap. Like 25 or 50 cents per person each time you got on or off. Remember the subway fare was only 15 cents and special Worlds Fair buses a quarter. There may have been daily passes for at least $1. So after spending $1.20 to get the four of us there and back, he wasn’t going to spend at least four times that just to get around within the Fair. I remember how my feet ached from walking all day and standing in long lines all day and I was only 15.

I remember riding it a few times. I thought this was going to be the new subway although above ground. I guess it costs to much to build all over the city.