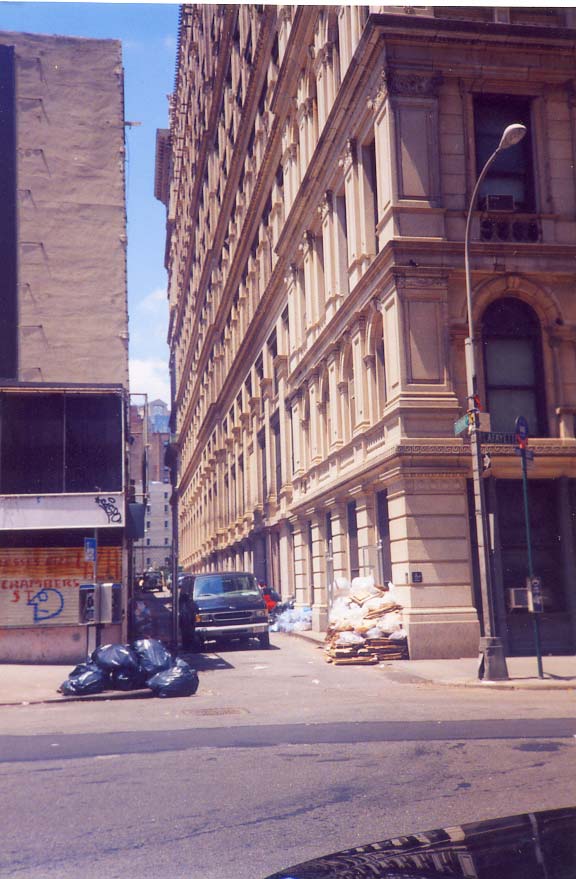 Catherine Lane is one of Manhattan’s “forgottenest”alleys. It’s still there — it runs between Broadway and Lafayette just north of Worth Street. However, it has been shrouded by a permanent construction canopy for the past 15 years and thus has been rendered impossible to see. I got this shot from Lafayette Street in 1999.

Catherine Lane is the southern border of the famed Broadway Clock Tower Building, which was built in 1898 (the same year Greater New York was created, uniting five boroughs) for the New York Life Insurance Company. The clock is a manual clock which needs winding every week! A plan by a developer to electrify the clock was thwarted in 2016.

Catherine Lane, Street and Slip are named for Catherine Rutgers, a member of the prominent Rutgers family who owned large swaths of territory in Revolutionary-era Manhattan.

Oddly, Catherine Lane is not quite parallel to neighboring Worth and Leonard Streets.

Until recently, the Broadway Clock Tower Building was home of the Summons Unit of NYC Criminal Court. Although the official address was 346 Broadway, the public entrance was at 108 Leonard Street (between Broadway and Lafayette).

The Summons Unit moved to the Municipal Building because the Broadway Clock Tower Building is being renovated for residential use. Go there now and you’ll see the building covered in scaffolding.

It’s interesting that no one mentioned the homeless people who live on Catherine Lane in cardboard boxes. When I was staying at the NYC Rescue Mission, just three or four blocks north of Catherine Lane, one day I walked along the lane. I was surprised at how warm it was in the Winter time, with the permanent construction canopy in place like a roof over the lane. This was five years ago.