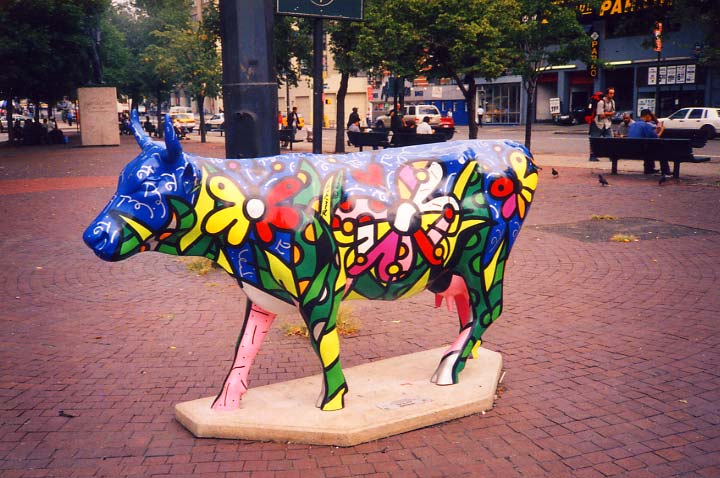 Things were a little different in 2000. Bill Clinton was in the White House while the presidential race was shaping up to be Bush vs. Gore. The economy was on an even keel and had been for most of the past 8 years. The largest scandal had been the Big Dog’s adventures with an intern and a cigar in the White House and a slight dustup in the Balkans. Hillary had attempted health care for all, but when it failed it was pushed down the road for the next 8 years, to the next Democratic administration. Though a truck bomb went off in the World Trade Center in 1993, terrorism wasn’t in the forefront of our fears even though Osama bin Laden was making threats. It would be a couple of years before soldiers in camouflage unis were toting machine guns in Penn Station. Madonna was still at the top of the music charts, and things were still pretty loosey and goosey. WPIX morning news anchor Lynne White wore a Playboy bunny costume while reading the news on Halloween. But it was about to get serious in a hurry.

Seen nearly everywhere in Manhattan in 2000 were painted fiberglass near-life size cows, all worked on by different artists, as part of the Cow Parade project that had begun in Zurich, Switzerland in 1998 and came to Chicago in 1999. It was New York’s turn in 2000. The program, ran by CowParade Holdings Corporation, has placed the cows in dozens of cities since; in 2016, the bovines were in Perth, Australia and Belm, Brazil. In 2008, the same company distributed All Star team statues in New York, when the All Star Game was held at Old Yankee Stadium.

A second well-known public art project, Christo’s Gates, which filled Central Park with orange fiberglass and fabric in the winter of 2005, was decidedly more austere.

Before you start referring to 2000 as the good old days please click the link below & realize that 9/11/01 was less than a year away:

How about you quote a reputable source, not just a “Brown people bad!” rag?

We had mules in Bethlehem pa, n Catskills has…well…cats. I thought this was a small town thing till I moved up here

I don’t think Kevin is saying anything about good old days more as in things were different.

Are there any remaining “cows” anywhere in NYC ?

If so, a possible follow up to this piece ?

When I was last at the Lent Riker House in Queens, there was one on the grounds.

In Oklahoma City, you can find artist decorated fiberglass bison throughout the city.

Who has the world trade cows