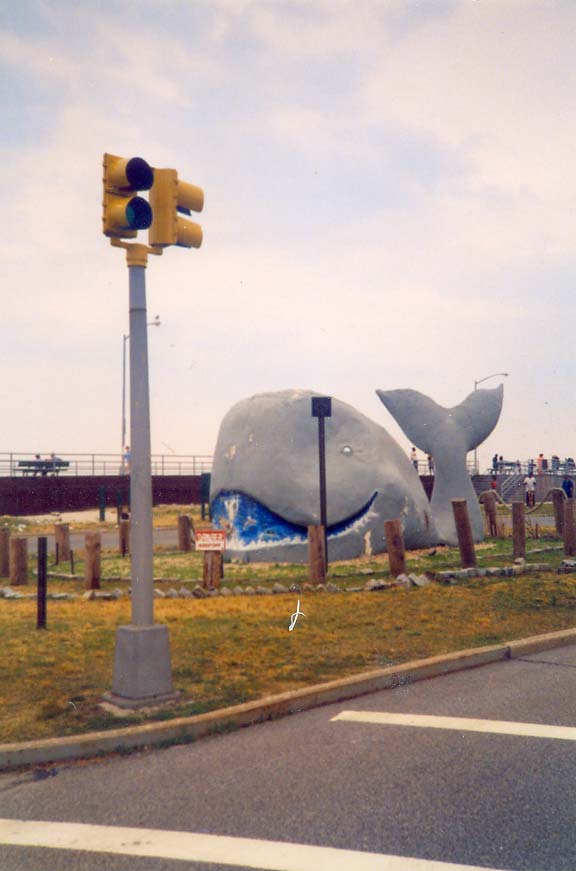 In the early days of Forgotten NY, there were still a few two-light stoplights in NYC, missing the center yellow or “amber” warning lamp, which, of course, flashes for a couple of seconds before the red stop signal is turned on. As “Starman” Jeff Bridges says, yellow means “go very fast.”

In 1999, there were still holdout areas, mostly out of the way, using two lights; one was Shore Front Parkway, shown above with the former Rockaway spokeswhale Whaleamina. Several street corners in Far Rockaway, a few miles east, also had two-lampers. 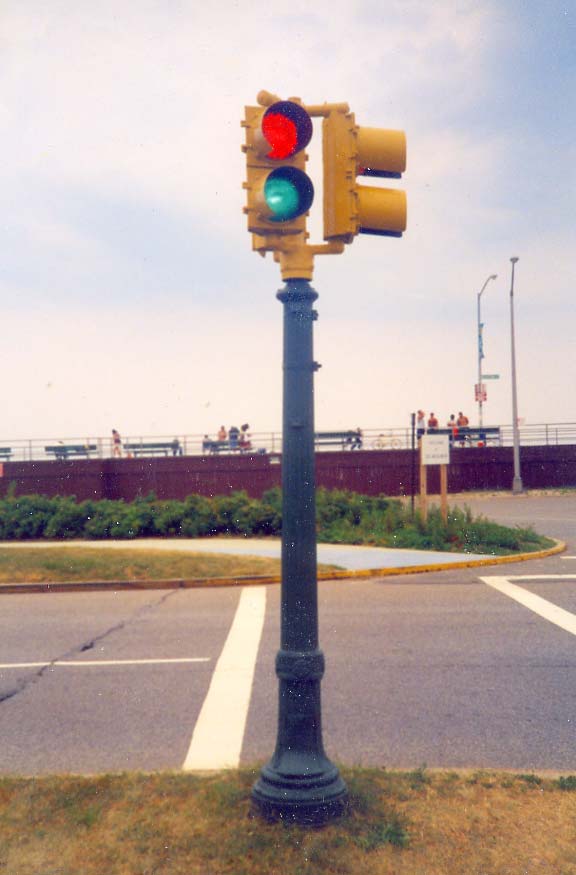 Before the light changed to red, two lamps shone simultaneously to stand in for the missing yellow light. 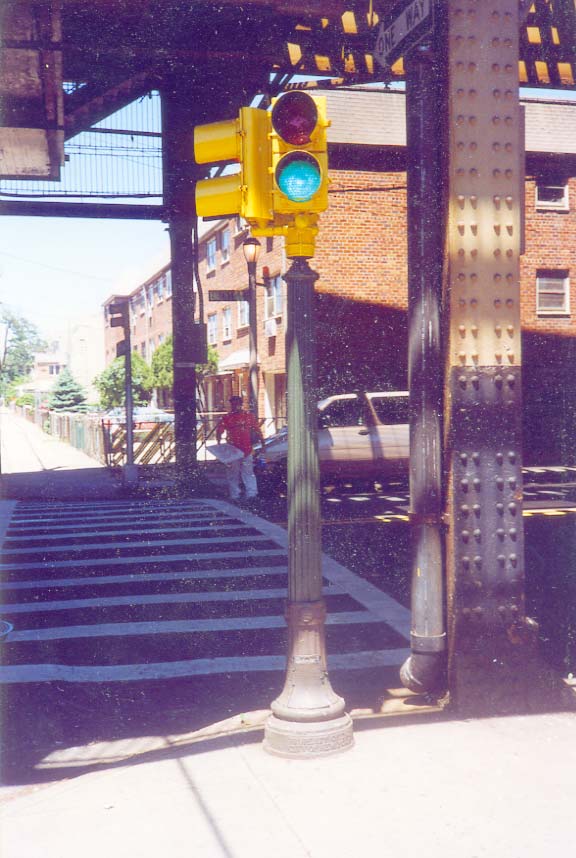 Finally, in 1999 I also noticed a brace of two-lampers on Liberty Avenue in Ozone Park, both on “olives” and on cylindrical poles. These were all replaced by the middle of the first decade of the 21st Century.

“Comment…as you see fit” in Comments below.

KING OF THE DOGS: Coney Island to Gravesend

I recall a small number of these along 71st/Continental Ave. (perhaps at Austin St.?) in Forest Hills from my frequent trips as a child. Perhaps they were common throughout The Gardens. They always stood out to me because I had it drummed into my head that a traffic light had three lights and these only had, of course, the two.

By recollection, they were replaced with standard 3-light signals in the mid 1980s.

When I was a kid, back in the late Stone Age, I saw a few two-lighters with the green lamp on top and the red below. But I can’t swear they were located within the City limits, or situated elsewhere, like somewhere I might have spotted them during an occasional adventure into the wilderness aboard our 1938 Studebaker. Can anyone else recollect such anomalies?

There is one in Syracuse, New York. It is located in an Irish neighbourhood

You are correct! It had something to do with that specific town wanting to be different do to the Irish heritage. A friend told me about it in college at Syracuse University.

Yes. There were a few survivors down in Georgia back in the 1960s. They were four-way lights that only had two bulbs; the lower bulb illuminated green/green (Main Road) and red/red (Side Road). Both bulbs would briefly illuminate when the light was changing, with all eight lenses on for a few seconds. Then the Main Road would be red/red (top lenses) at the same time the Side Road would be green/green (also top lenses). These were all gone by 1970 as far as I can recall.

Some did not shine both lights instead of yellow. They both went dark (dark period) briefly before changing.

Re Green top/red bottom lights, I remember seeing them probably in the 50’s and most likely in the south.

Slightly off-topic, perhaps, but is the whale in the first photo the same one that was in the Central Park Children’s Zoo?